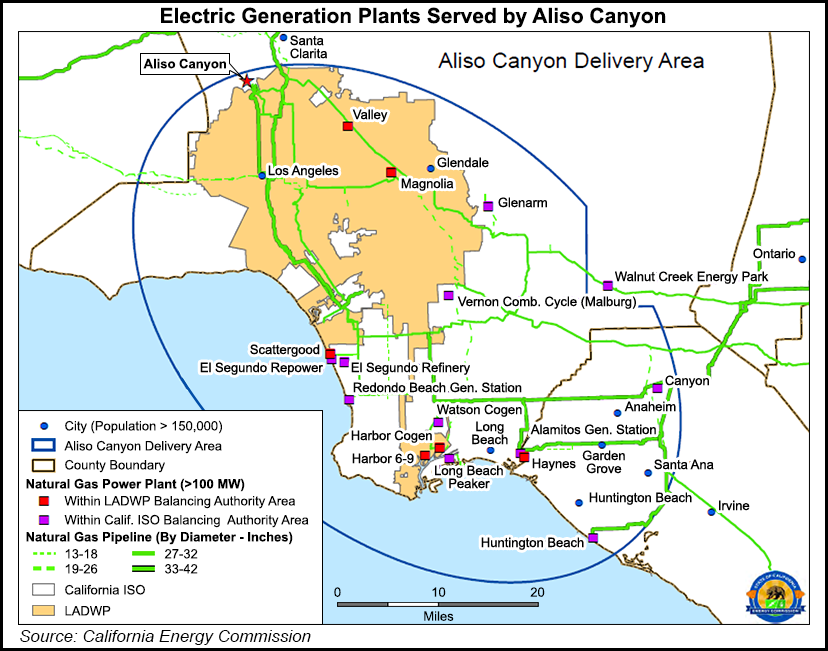 Activist groups and the nonprofit Food and Water Watch (F&WW) allege that state predictions of possibly 14 days of rolling blackouts this summer and next winter due to the loss of the Aliso Canyon gas storage operations have been cooked up by analyses largely attributed to SoCalGas. “This is government enabling corporate misbehavior, not regulating or sanctioning it,” said Bill Powers, the F&WW’s engineering expert.

Based on a public records request to the California Independent System Operator, Powers and other critics claim SoCalGas was a “de facto” member of the state risk assessment task force that developed the scenarios and conclusions regarding the potential for gas curtailments (see Daily GPI, April 5).

In a report from California Public Utilities Commission (CPUC) staff last week, state officials were told that if limitations can be removed at California’s now-closed largest natural gas storage facility, an increase in withdrawal capacity could lower, if not eliminate, the risk of gas curtailments leading to rolling power outages during peak demand days this summer (see Daily GPI, June 30).

But Save Porter Ranch, a group of residents living in upscale Porter Ranch near the Aliso Canyon facility, came out swinging Friday, alleging that SoCalGas and state officials are locked in an unholy partnership, rushing to reopen the 86 Bcf capacity, 3,600-acre facility on the northern fringe of Los Angeles’ suburban San Fernando Valley.

Porter ranch residents’ say the Aliso well leak was the “largest gas blowout in U.S. history,” and as such, the residential community, where the four-month-long gas well leak forced several thousand families out of their homes, has been “left devastated,” according to Matt Pakucko, president of Save Porter Ranch.

“The Aliso Canyon storage facility will always put our communities at risk of future disasters and ongoing pollution unless it is shut down permanently,” Pakucko said.

The energy industry and state officials have emphasized the importance of the facility, but under a state law passed earlier this year and signed quickly by Gov. Jerry Brown (SB 380), a detailed testing, remediation and final state approval process is under way for each of the facility’s 114 storage wells. Some wells, including the one that sprang the four-month leak, have been determined to be unfit to continue operating and have been permanently sealed.

As of June 20, only four fully tested, remediated and inspected wells were available for gas withdrawal at the facility, according to the CPUC staff, with an another 17 wells having completed the first of three phases of tests. “[Those] can be available for withdrawal if needed for reliability, CPUC staff said.

Five other wells had completed all three phases of the safety review as determined by the state Division of Oil, Gas and Geothermal Resources and been approved, but are not operational, and 23 others were still undergoing comprehensive inspection review.

E-mail communications between SoCalGas and state energy officials preparing the risk assessment earlier this year indicate that “the state gave SoCalGas a blank check to make the case to reopen Aliso Canyon,” according to Alexandra Nagy, a senior organizer and spokesperson for F&WW, which has been lobbying for the facility’s closure for months.

Separately on Friday, a California climate nonprofit released a report concluding that the state is a leading developer of clean energy and the green economy. Billionaire climate change activist Tom Steyer’s Next 10 group released an index that purports that California is among the top five globally in world measures including energy productivity, electricity from renewable sources, and reductions in carbon intensity.

The report noted that last year, 3,266 MW of solar photovoltaic rooftop solar power was installed in California, tops in the United States.