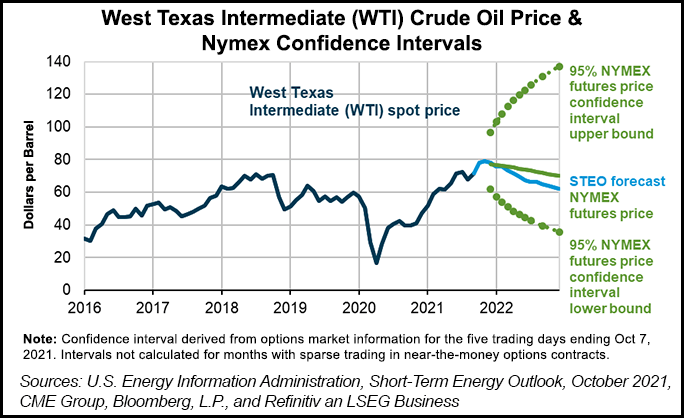 Brent crude oil spot prices averaged $74/bbl in September, representing a $4 sequential increase from August prices and a $34 year/year increase, according to EIA. The agency pointed to “steady draws on global inventories” to the tune of 1.9 million b/d on average through the first nine months of 2021. The Organization of the Petroleum Exporting Countries and its allies, aka OPEC-plus, opting earlier this month to leave current production targets in place, has also helped push prices higher, EIA said.

In the latest STEO, EIA said it expects Brent prices to stay near current levels through the end of the year, averaging $81 for the fourth quarter, representing a $10 increase over the previous forecast.

“The higher forecast reflects our expectation that global oil inventories will fall at a faster rate than we had previously expected owing largely to lower global oil supply in late 2021 across a range of producers,” researchers said.

EIA said it anticipates supply growth in 2022 from OPEC-plus, U.S. tight oil and other sources not part of OPEC, to “outpace slowing growth in global oil consumption” and lead Brent prices lower next year, down to a forecast annual average of $72.