A Texas-size group of operators and trade associations on Tuesday launched a Lone Star effort to minimize flaring and methane emissions from the largest producing state in the nation. 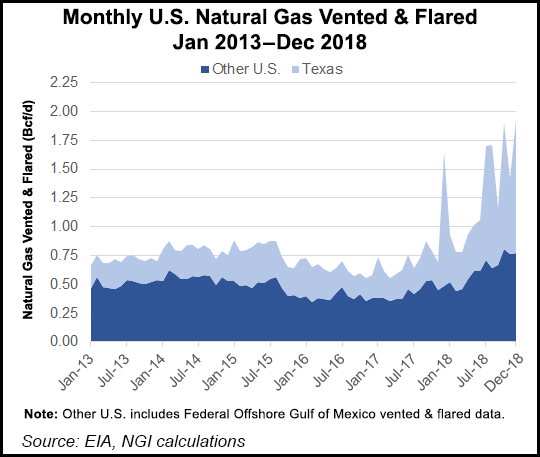 The Texas Methane and Flaring Coalition collectively plans to identify and promote operational and environmental recommended practices by evaluating existing data and evidence on flaring and methane emissions. The goal is to develop opportunities and recommendations to minimize these practices.

Among other things, the coalition wants to define why and when flaring is necessary and communicate the environmental and safety reasons that may necessitate flaring. It also wants to identify, assess and recommend opportunities and best practices, as well as evaluate existing studies.

The Texas Independent Producers and Royalty Association (TIPRO) is one of the founding members.

“Amid the boom of oil and gas development over the last decade in Texas, the state’s oil and gas industry continues to advance efforts to improve its environmental stewardship,” said TIPRO President Ed Longanecker. “TIPRO and its members have long supported the collection of additional data and analysis on the topic of flaring and venting trends, specifically, and welcomes constructive conversations and collaboration between all stakeholders on this issue.”

Many exploration and production (E&P) companies whose activity is centered in the Permian Basin have said they are committed to reducing flaring and emissions. Permian flaring was a big topic of discussion during fourth quarter conference calls. Rates during 4Q2019 were said to be running around 5% of production.

Pioneer Natural Resources Co. Scott Sheffield said the basin’s operators needed to reduce flaring rates below 2% by the first half of 2021 or investors could shun them altogether. He long has called for Permian E&Ps to limit flaring or suffer the consequences.