A Charleston, WV-based producer has plans to drill two shallow horizontal oil wells in an underdeveloped area in the western part of the state, aiming to keep its costs down amid the commodities glut. 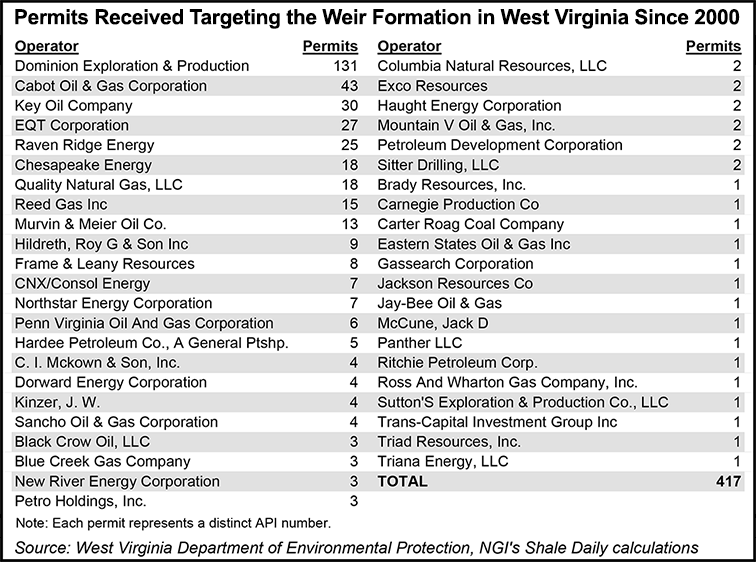 Privately-owned Cunningham Energy LLC said it would drill two development wells targeting the Weir Sand formation in Kanawha County, WV. The company said its wellbores could extend up to 6,800 feet and the wells would have true vertical depths of 2,150 feet. Cunningham said it would complete the wells with multiple fracture stages but offered no other details about its completion plans.

A sandstone formation, operators have drilled and completed wells in the Upper, Middle and Lower Weir. Those wells have been completed farther south in West Virginia and Kentucky, where companies have traditionally used foam frack completions and encountered low reservoir pressures.

Cunningham was founded in 2008 to acquire assets in the Appalachian, Illinois and Williston Basins. Its primary operations, however, have been focused in West Virginia, where it has sizeable shallow interests and some acreage for shale and deep drilling that it hasn’t pursued.

Since it was founded, the company has targeted shallow formations such as the Berea and Big Injun Sandstones. To the west of Kanawha County, Cabot Oil & Gas Corp. has drilled a vertical test well to the Rogersville Shale in Putnam County, WV (see Shale Daily, Aug. 20, 2015). Cunningham has in the past drilled development wells in the Big Sandy Field, which is also located in Kanawha County.

“Economic conditions in our industry point to lower cost production being the new normal, and the Weir Sand horizontal can possibly fit into that slot,” he said. “The company sees possible lifting costs of this new play to be advantageously low during the first years of production.”

Cunningham is currently in the process of drilling Big Injun development wells in nearby Clay County, WV. The company said it would spud its first Weir well in the spring.