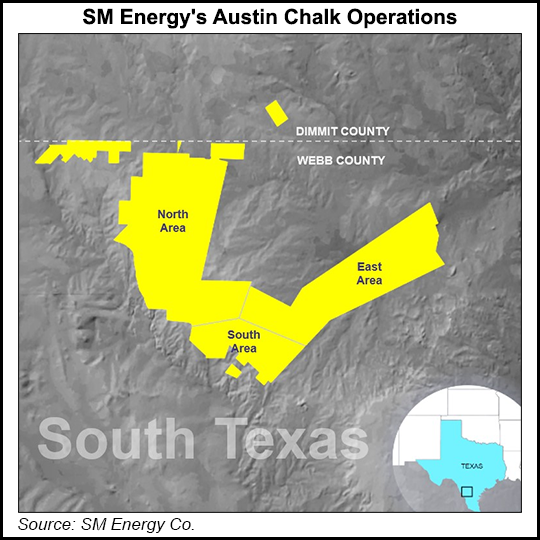 Production volumes in South Texas, which made up 43% of the company’s total production in 2Q2022, reached 5.8 million boe. The operator saw 15.5 MMcf in total natural gas output from its South Texas assets, as well as 1.2 million bbl of oil and 1.9 million bbl in natural gas liquids (NGL).

The independent, which also works in the Permian Basin’s Midland sub-basin of West Texas, is estimated “to have organically added about 400 locations to inventory” in the Austin Chalk, where “wells drilled in 2021 and 2022 have payouts that average less than one year, demonstrating the very high quality of these assets,” Vogel said.

Production volumes from the Midland acreage comprised about 57% of the independent’s total output. Nearly 16 MMcf in total natural gas output was in the Midland, along with 4.9 million bbl of oil and 4 million bbl of NGLs.

The E&P recently completed tests on three of its Dean play in the Permian, which “had average IP30 rates of 2,400 boe/d, with 88% oil and average 12,300-foot laterals,” Vogel said. “The wells have outperformed our expectations due both to great rock and higher proppant loading in their completions.

“In total, we have drilled 14 Dean wells to date with average 30-day peak IP rates of 1,440 boe/d at an average 89% oil. Dean wells are being incorporated into our optimized co-development plans.”

Through 2022, SM expects to drill 98 net wells and complete 81 net wells, with 43 in South Texas, up from 38 in the operating plan issued in the first quarter. The E&P also altered its completion plans for the Midland wells, reporting it could complete 38this year, down from 40 in 1Q2022.

“We had a larger gap in South Texas, so we closed that gap,” said Vogel. “It’s primarily in South Texas” on the fracture spreads. “And on the Permian side, it’s just the timing around the end of the year on the turn-in-lines.”

On Wednesday, Chesapeake Energy Corp. said it was looking for a buyer for its Eagle Ford Shale assets in South Texas. The acreage directly offsets SM’s Austin Chalk northern acreage.

When asked if SM might buy the properties, Vogel told investors, “we always evaluate those…And if it’s something that makes sense for our shareholders, we’d obviously look at it. That’s a very recent announcement, so I don’t know how that will look.

“It’s not a great time” for acquisitions and divestitures “from our perspective…We’’ll see where things shake out on commodity prices, but there’s clearly some great acreage offsetting us in South Texas,” Vogel added.

Production revenue increased by 76% in 2Q2022 from a year ago, driven by a 7% increase in production and 64% increase in the company’s average commodity prices.

Capital spending has been boosted “to assume another 10-15% of inflation,” said CFO Wade Pursell. “And it incorporates continuous rig and pressure pumping activity through year-end.” Inflation is expected to be higher in the final half of this year than projected in February, he said, “which concurs with the most recent industry estimates that are indicating closer to 30% as of mid-year.

“We do believe we are still below current market rates overall, thanks in part to our efficient site operations that, in turn, support our contractors. Given the tight supply of rigs and pressure pumping equipment, combined with tight labor, we will maintain the excellent teams we are now using into 2023, which optimizes capital efficiency and safety over the long run,” Pursell said.

When asked about what inflation may hold in store for 2023, Vogel told investors that “after Russia invaded Ukraine, it was just really hard to figure out the supply chain. And we fortunately had commitments through much of this year on most of what we needed and then we lost that down real fast for this year and started going into next year much earlier than we normally would and that went for steel.”

Proppant sand using in fracturing operations is “now locked in… for 2023 for South Texas…We’re progressively going through every single part of our supply chain, making sure we’ve got everything when we need it at the best price possible.

“But in some cases, we know what our inflation would be for activities. And so, for some others, we don’t yet know what it’ll be like. So, it’s going to be just part of our normal processes in the fourth quarter and as we get into the budget for 2023, when we’ll pin all that down,” Vogel said.