SM Energy said Wednesday that next year it will spend 90% of its planned drilling and completions budget of $1.2 billion on its Eagle Ford, Bakken/Three Forks and Permian Basin programs. 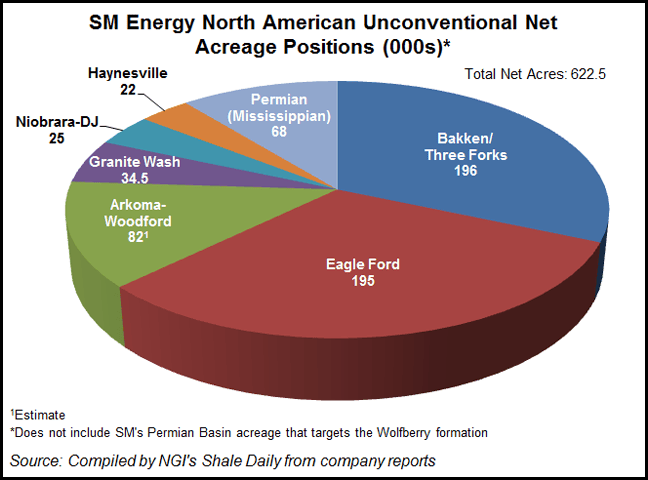 “The capital budget is anchored by our high-return Eagle Ford and Bakken/Three Forks development programs, with additional investments being made in emerging oil programs in the Permian Basin,” said CEO Tony Best. “Our production mix will continue to shift from lower-value natural gas to higher-value liquids throughout the year.

“We expect to grow production by 20% in 2013, followed by annual production growth of approximately 15% in 2014 and 2015 with improving leverage metrics and no equity dilution.”

Equities analysts were enthusiastic about the outlook for the company. BMO Capital Markets and Wells Fargo Securities each have an “outperform” rating on SM Energy shares.

“Bottom line, a solid outlook, and one that can be achieved within existing takeaway capacity, and that demonstrates the resource potential of SM’s Eagle Ford and Bakken acreage,” wrote BMO analyst Phillip Jungwirth. “The main drawback is that growth is back half-weighted (as expected) and investors could take a ‘show-me’ approach to growth, but we’d be buying now given the attractive valuation [BMO price target: $65/share].”

Wells Fargo has a valuation range on SM Energy shares of $82-88 with a net asset value estimate of $77.59/share. “SM Energy has been characterized as a diverse, well disciplined, low-risk operator for years,” wrote Wells Fargo’s David Tameron. “Under CEO Mr. Tony Best, SM has transitioned to a resource play focus with a highgraded asset base. We believe the combination of strong, fully funded production growth (estimated 26% in 2012), higher liquids percentage (which should reach 50% of production next year), and a diversified asset portfolio will result in share outperformance versus its peers.”

Denver-based SM Energy plans to operate five drilling rigs, supported by two dedicated frack spreads, on its operated Eagle Ford shale acreage in 2013. Most of the company’s Eagle Ford activity next year will be focused on swath drilling in the northern portion of its Galvan Ranch acreage and the eastern portions of its Briscoe Ranch acreage, it said. “Swath drilling allows wells to be drilled at optimum spacing and mitigates complications associated with attempting to drill and complete infill locations later in field life.” The company said it expects to complete 75 flowing completions during the year, with an additional 40 wells waiting on completion at year-end. SM Energy forecasts its non-operated Eagle Ford shale net production to increase by roughly 5% per quarter throughout 2013.

Bakken/Three Forks activity will be focused on the Bear Den, Raven and Gooseneck prospects. SM Energy will operate about 80% of the capital allocated for the program and plans for about 40 flowing completions in the operated portion of the program. The company will enter 2013 with four operated drilling rigs; however, efficiencies associated with pad drilling will allow completion of this program averaging 3.5 rigs for the year.

SM Energy plans to operate two drilling rigs in its operated Permian Mississippian program in 2013, with about 12 flowing completions planned. One operated drilling rig is scheduled to work on Bone Spring projects in southeastern New Mexico, with six flowing completions planned. SM Energy will operate substantially all of its capital investments in the Permian next year.

The company expects full-year 2013 production to range 255-267 Bcfe (699-732 MMcfe/d), which represents a 20% annual increase over 2012 at the midpoint of next year’s guidance. SM Energy expects to exit 2013 producing within 769-808 MMcfe/d with a mix of 50% natural gas, 29% oil and 21% natural gas liquids. “This production growth profile is weighted to the second half of the year and reflects the timing of previously contracted firm transportation agreements in the company’s operated Eagle Ford shale program,” SM Energy said.