Denver-based SM Energy Co. is expanding its footprint in the Midland Basin through the acquisition of 35,700 net acres in Howard and Martin counties in Texas. After closing, SM Energy will hold about 82,450 net acres in the sub-basin of the Permian. 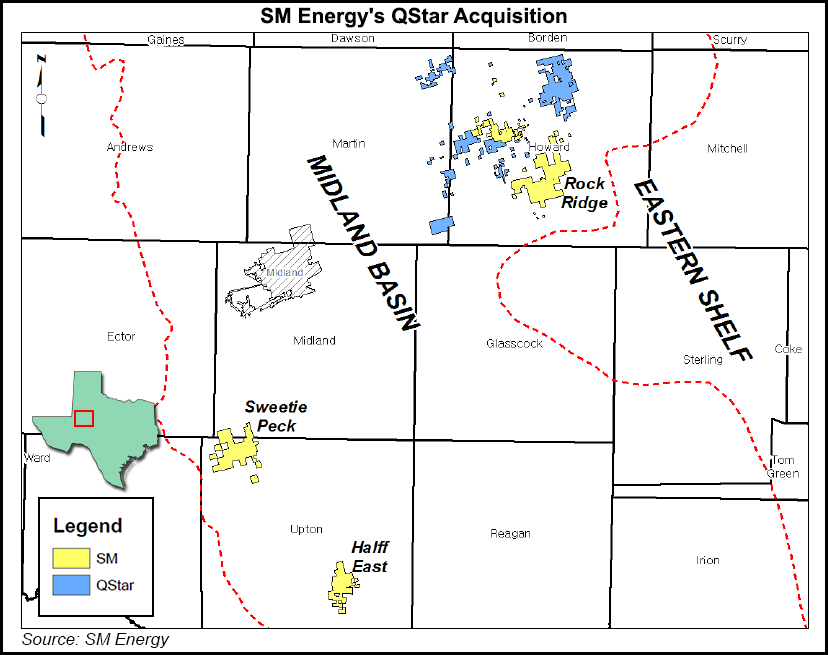 The acreage being acquired complements, and is partially contiguous to, the company’s recently acquired Howard County acreage and includes about 2,400 boe/d net production (see Shale Daily,Aug. 8). The purchase price is $1.1 billion cash, subject to adjustments, plus 13.4 million shares (about $500 million worth) of SM Energy common stock to be issued to the seller, which is QStar LLC, a portfolio company of EnCap Investments LP and a related entity.

“We have established a position as an outstanding operator in the Midland Basin, and with this acquisition we also establish significant scale,” said SM Energy CEO Jay Ottoson. “We are particularly excited about the performance and future potential of Howard County, leading us to further core up our portfolio and focus on this fast emerging, top tier area.

During a conference call to discuss the acquisition, Herb Vogel, executive vice president of operations, talked about how the company has studied Howard County and what it sees there.

“We’ve been evaluating Howard County as an expansion area for quite some time and could see how the tools and experience we have developed on the west side of the basin at Sweetie Peck could be applied to the east side of the basin,” Vogel said. “We’ve built an extensive database of geologic and engineering data and identified Howard County as an area with latent potential and an early stage of maturity in terms of development and value optimization.

“We could really see that we were capable of delivering tier one returns in the eastern part of the Midland Basin where others had not yet recognized the potential.”

As with the previous Howard County acquisition, SM Energy said it plans to “immediately employ our operational expertise to the area. Our preliminary plans for Midland Basin activity include adding a fourth rig during the fourth quarter of 2016 and increasing to six rigs in early 2017, thereby increasing our expected aggregate 2016 capital program before acquisitions to approximately $710 million.”

The company said it plans to fund the majority of the $1.1 billion cash portion of the Midland Basin acquisition with proceeds from the Williston Basin sale and the remainder under a revolving line of credit, which has a borrowing base of $1.35 billion, aggregate commitments of $1.25 billion and was undrawn as of Oct. 14.

SM Energy is issuing to the sellers $500 million in SM Energy common stock based on the 30-day volume-weighted average price of $37.35/share, or about 13.4 million shares.

“SM Energy will have one of the largest, highest-quality leasehold positions in the Midland Basin, pro forma the QStar transaction, and we believe SM’s operations team is ideally suited to optimize the long-term value of QStar’s excellent asset base,” said QStar CEO Gerald Carman. “SM is successfully executing a transformation that we view as under-appreciated by the market, and this transaction provides our management team and sponsor significant upside exposure as we will be among SM’s largest shareholders.”

The company said it is on track with the planned sale of its nonoperated assets in the Eagle Ford Shale. Funds from that sale are expected to be spent to accelerate the Permian Basin program.