SM Energy Co. is selling natural gas-heavy assets in the Arkoma Basin of Oklahoma and in the Arklatex area of East Texas and northern Louisiana — its remaining Midcontinent holdings — in order to focus on its Eagle Ford and Bakken/Three Forks development areas, the company said Tuesday. 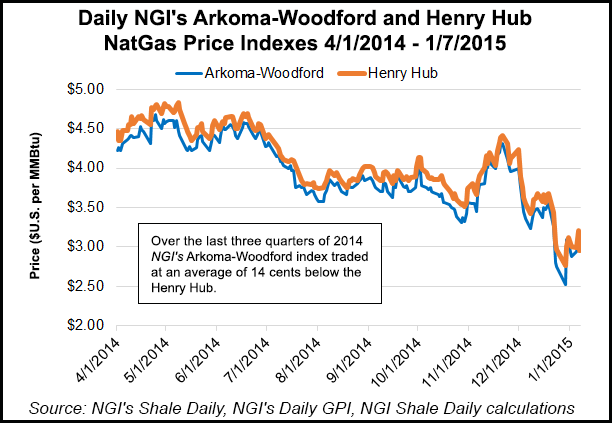 “Based on our calculation, we estimate the assets to fetch around $150-200 million,” Topeka Capital Markets analyst Gabriele Sorbara said in a note Wednesday, adding that the move should bolster investor enthusiasm as it lets go of “low-value natural gas reserves” to help bridge a funding gap. SM Energy shares were up modestly in early trading Wednesday but ended the day down more than 4% at $34.40.

The assets to be sold produced about 3.4 million boe net during 2014 (98% gas), according to SM Energy. The sale is to be managed by RBC Richardson Barr & Co., and assuming acceptable bids, closing should be in mid-2015.

“At $4,000-5,000/MMcfe, a transaction would generate $220-280 million of proceeds,” Wells Fargo Securities analysts said in a note Wednesday. “…[N]umerous factors, including an uncertain A&D [acquisition and divestiture] market, could lead to a wider range of outcomes…

“While some might question the timing, i.e., selling when the natural gas strip is roughly $3.00/MMBtu, we have heard many management teams over the years say that when they decide to divest of a region or asset, it’s best to do it, not try and wait and time the market, and free up resources (people, capital, expertise, etc.) that can be best utilized elsewhere. And in the big scheme of things, this isn’t a big asset relative to the size of the company’s portfolio.”

A sale could be tough going in the current commodity price environment, Sorbara said, but the natural gas assets might be of interest to a master limited partnership or private equity fund.

SM Energy also plans to close its Midcontinent regional office in Tulsa later this year and relocate many of its personnel there to other offices.

“We had a strong 2014, driven by outstanding well results across the company,” said CEO Tony Best. “This was particularly true in our core Eagle Ford and Bakken/Three Forks development areas where, as previously disclosed, we have economic drilling inventory equating to over 20 years of current company production and 10 years of gross locations at our current pace.

“Our balance sheet is strong; we have ample liquidity, and we are confident that after costs adjust to the current commodity pricing environment we will continue to generate strong, industry leading returns on capital employed.”

According to a December investor presentation, in the Eagle Ford, SM Energy has about 144,000 net operated acres and about 46,000 net nonoperated acres. In the Williston Basin the company has about 238,000 net acres total.