U.S. natural gas production has begun to flatten while crude oil output has fallen more than projected in March, but prices aren’t expected to strengthen on either count this year, the Energy Information Administration said Tuesday. 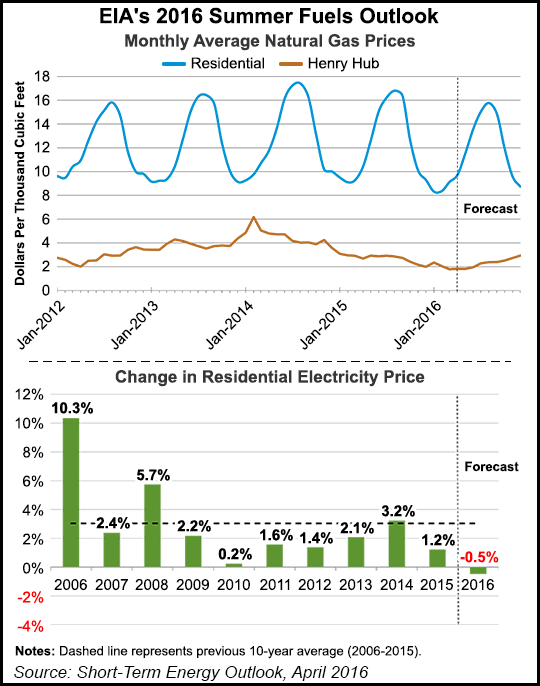 In the latest Short-Term Energy Outlook (STEO), the forecast for 2016 Henry Hub gas prices was reduced, with expectations that the average now will be $2.18/MMBtu, which is 3% lower than EIA predicted in March. The gas price forecast has fallen from last month’s average of $2.25/MMBtu, which was down from February’s $2.64 (see Shale Daily, March 9). The 2017 gas price forecast issued last month remains the same at $3.02/MMBtu.

“The Henry Hub natural gas spot price averaged $1.73/MMBtu in March, a decline of 26 cents/MMBtu from the February price,” the STEO said. “Warmer-than-normal temperatures through most of the winter, record inventory levels, and production growth have contributed to sustained low natural gas prices. Monthly average Henry Hub spot prices are forecast to remain lower than $3.00/MMBtu through December 2016.”

“Current options and futures prices imply that market participants place the lower and upper bounds for the 95% confidence interval for July 2016 contracts at $1.48/MMBtu and $3.14/MMBtu, respectively.” Earlier this month, the gas futures contract for July 2015 delivery averaged $2.76/MMBtu, “and the corresponding lower and upper limits of the 95% confidence interval were $1.90/MMBtu and $4.00/MMBtu.”

As it has said previously, EIA said working gas storage inventories ended the winter withdrawal season at 2,478 Bcf, “slightly above” the previous record high at the end of March 2012.

Forecast electric power sector use of gas is expected to be 3.9% higher this year then decline by 1.3% in 2017, as prices rise. Industrial sector gas consumption is forecast to be up by 2.7% in 2016 and by 2.2% in 2017, as new fertilizer and chemical projects come online.

Production in the Marcellus Shale in Pennsylvania and West Virginia “increased substantially from December 2015 levels, offsetting production declines in other areas, particularly in Texas. EIA survey data have shown some production flattening on a national level, and EIA projects relatively low production growth through most of 2016, as low natural gas prices and declining rig activity begin to affect production.”

“Both Brent and West Texas Intermediate (WTI) crude oil prices are forecast to average $35/bbl in 2016 and $41/bbl in 2017,” EIA said. However, the current values of futures and options contracts suggest high uncertainty in the price outlook. For example, EIA’s forecast for the average WTI price in July 2016 of $35/bbl should be considered in the context of New York Mercantile contract values for July 2016 delivery that were traded during the five-day period ending April 7, suggesting that the market expects WTI prices to range from $27/bbl to $57/bbl (at the 95% confidence interval).”