Driven by declines in the oil patch, the U.S. rig count fell two units to 310 for the week ending Friday (Nov. 20), according to the latest numbers from Baker Hughes Co. (BKR). 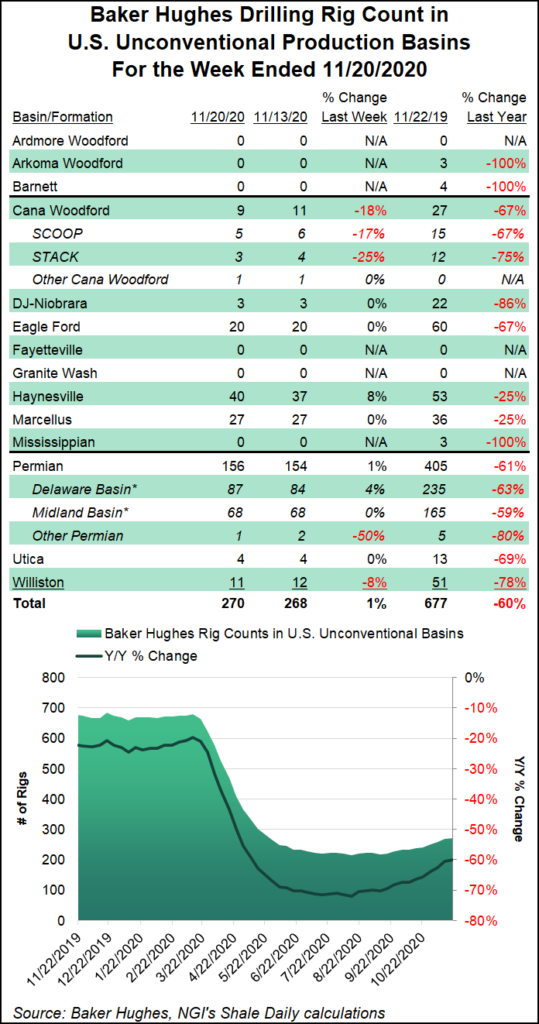 After a five-rig decrease in oil-directed drilling, partially offset by the addition of three natural gas-directed rigs, the overall domestic tally finished with 493 fewer units versus the year-ago period, according to the BKR numbers, which are based on data provided in part by Enverus Drillinginfo.

The drop-off for the period also marks the first week/week decline in overall domestic drilling since September, when the U.S. count fell to 254.

Five horizontal rigs were added in the United States, while four vertical rigs and three directional rigs packed up shop. Land drilling decreased by one overall, while one rig departed in the Gulf of Mexico.

Meanwhile, the Canadian rig count jumped 12 rigs higher for the week to reach 101, including three oil-directed rigs and nine gas-directed. The Canadian count finished the week 36 units shy of its year-ago total of 137.

The combined North American count ended the week at 411, down from 940 at this time last year, according to BKR.

Broken down by play, it was a strong week for the gassy Haynesville Shale, which picked up three rigs to grow its count to 40, down from 53 in the year-ago period. The Permian Basin added two rigs for the week.

Among states, New Mexico saw a net gain of two rigs week/week, while Oklahoma, Texas and Wyoming each saw a net decrease of one.

Bankruptcies in the North American oil and gas industry slowed to a total of three in October, but more filings are likely before year’s end, according to the latest monthly Oil Patch Bankruptcy Monitor report published earlier in the week by Haynes and Boone LLP.

“While the pace of bankruptcy filings for producers has slowed from the wave last summer, the current borrowing base season for oil and gas borrowers may put further pressure on some of the already financially stressed producers,” the law firm said. “Combined with the general lack of access to capital, additional filings are likely before 2020 comes to a close.”

This comes as upstream investor Kimmeridge Energy Management Co. LLC has the U.S. exploration sector in its sights and is calling out the industry for its “lack of alignment” between the executive management teams and their shareholders.

The New York City-based private equity firm said in a white paper that executive compensation for the exploration and production (E&P) sector was still rising, even though it is “one of the worst performing sectors” in the past decade.