The U.S. rig count fell four units to 790 during the week ended Friday (Jan. 31), led by a slowdown in the natural gas patch, according to the latest numbers from Baker Hughes Co. (BKR). 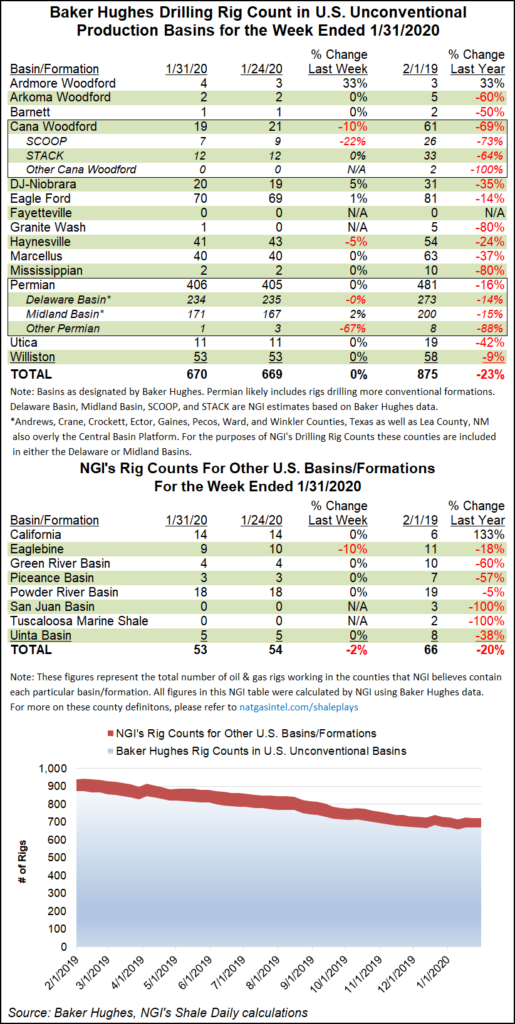 Three natural gas-directed rigs packed up in the United States during the week, along with one oil-directed, putting the combined domestic tally 255 units behind the 1,045 rigs active in the year-ago period.

All of the net declines occurred on land; the Gulf of Mexico finished flat week/week at 21 rigs. One horizontal rig was added in the United States, partially offsetting the departure of three vertical rigs and two directional, according to BKR.

Canada added three rigs, growing its count to 247, up slightly from 243 a year ago. The combined North American count finished at 1,037, versus 1,288 in the year-ago period.

Among plays, the largest declines on the week occurred in the Haynesville Shale and Cana Woodford, which each saw two rigs pack up shop. That left the Haynesville with 41 rigs, down from 54 a year ago. The Cana Woodford’s 19 rigs to end the week represent roughly a third of the 61 rigs active in the play at this time last year.

Among states, Louisiana dropped two rigs week/week, in line with the drop in Haynesville activity. Texas also saw two rigs pack up shop. Alaska dropped a rig, while Colorado added one, according to BKR.

It was a week of lurid headlines in the natural gas industry. As if sub-$2 futures weren’t discouraging enough for bulls, the Energy Information Administration projected sub-$4 Henry Hub pricing out to 2050 as part of its Annual Energy Outlook 2020.

Henry Hub prices in the Reference case “remain lower than $4/MMBtu throughout the projection period.”

U.S. gas prices are forecast to remain under the $4 handle through 2050 “because of an abundance of lower cost resources, primarily in tight oil plays in the Permian Basin. These lower cost resources allow higher production levels at lower prices during the projection period.”

Meanwhile, a BofA Global Research Report found that a “gasmageddon” has arrived, with prices expected to average $1.99 in 2020.

BofA dropped its expected natural gas price this year “to reflect the risk that there is little room for bearish errors from mild weather, high renewable generation or reduced liquefied natural gas exports. In addition, we believe both Rockies coal and global gas provide a soft ceiling in the mid-$2s for Henry Hub this summer.”