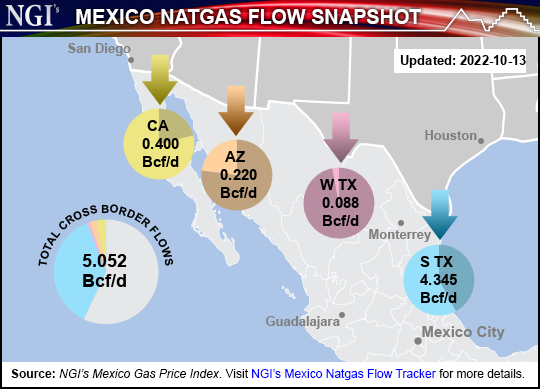 The restrictions went into place earlier this week and will continue until further notice. Users have been asked to stick to their programmed nominations.

Meanwhile, New York Mercantile Exchange natural gas prices for November seem to have settled into a pocket of between $6.00 and $7.00/MMBtu. U.S. production of more than 100 Bcf/d has supported the bears, but bulls are buoyed by strong demand and storage levels that remain 221 Bcf below the five year-average.

“What’s also influenced U.S. prices at times are updates to the ongoing Russian invasion of Ukraine and the major consequences it’s had on global energy supplies and prices,” NatGasWeather said in a note on Thursday. “Where prices go next is difficult to predict, but we continue to watch $6.60 on November contracts for when prices finally break sharply away from it.”

While temperatures rarely drop significantly in Mexico, the price of natural gas paid by users tracks closely to those north of the border.

Household expenditures for natural gas in the United States could climb to 51% above year-earlier levels for October through March in a scenario where temperatures are 10% colder than baseline expectations, the agency said. Projected cost increases for natural gas are the largest among the household heating sources looked at in EIA’s modeling.

EIA said forecasting from the National Oceanic and Atmospheric Administration pointed to slightly colder temperatures compared with last winter, which would drive higher consumption levels “across all fuels and regions.”

Despite price volatility that has continued to impact the market, a natural gas distributor in Mexico City told NGI’s Mexico GPI that demand remained normal and in fact a bit higher than usual.

On Thursday, Mexico imported 5.052 Bcf from the United States via pipeline, according to NGI calculations. Most of the gas (4.345 Bcf) came from South Texas. The data does not include intra-state trades within Texas.

Demand on Mexico’s Sistrangas on Tuesday (Oct. 11) was 4.411 Bcf, up from 4.375 Bcf a day earlier. Mexico gas production fed into the system was 1.290 Bcf. Southeast production dominated the total, with 722 MMcf from the region injected into the pipeline system.

The power sector was the biggest user of natural gas on the Sistrangas on Tuesday, at 1.348 Bcf. This was followed by the distribution segment (1.055 Bcf) and Pemex (1.081 Bcf). Industrial end users accounted for 915 Bcf of demand.

On Thursday, the EIA reported a 125 Bcf injection into natural gas storage inventories for the week ending Oct. 7. This was the fourth consecutive triple-digit injection.

The South Central region saw a 55 Bcf increase in inventories, highest among all regions. This included a 26 Bcf injection into nonsalt facilities and a 28 Bcf increase into salts, according to EIA. Until Mexico develops storage capability, this is the storage system most readily available to the country.