China Petroleum and Chemical Corp. (Sinopec) said Monday it has “made significant breakthroughs” in shale gas exploration and development and that it plans to develop the country’s first shale gas field — Fuling —  faster than previously thought, with annual production of 10 billion cubic meters (353 Bcf) by 2017. 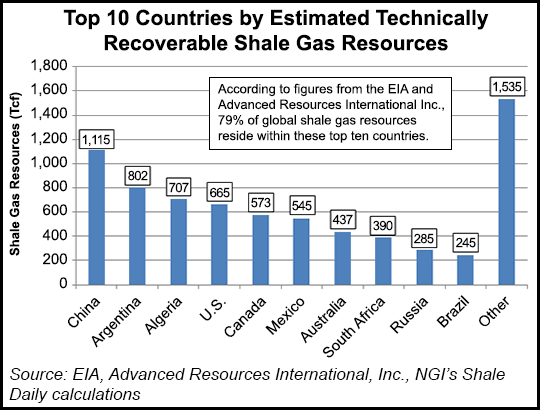 Fuling was discovered by Sinopec in Chongqing, in central China, and is said to be the country’s first large-scale gas field with reserves of 2.1 trillion cubic meters (74 Tcf).

“The discovery and construction of Fuling shale gas field, China’s first-ever large-scale shale gas field, symbolizes a significant strategic breakthrough in shale gas development in China and a much earlier entry into large-scale commercial development, which would otherwise have taken 10 years according to the original plan,” said Sinopec Chairman Fu Chengyu. “During this process, Sinopec has achieved a number of major breakthroughs in its resource evaluation system, technology system as well as [research and development] and manufacturing of fracturing equipment.

“The successful application of these developments in Fuling gave us much confidence in extending them to other projects around the nation. Given China’s abundant shale gas resources, we believe this will significantly support and accelerate the implementation of China’s shale gas strategy…”

According to the U.S. Energy Information Administration (EIA), China’s technically recoverable shale gas reserves are 1,115 Tcf, the largest in the world. Resource estimates of other sources are lower, EIA conceded, and China’s Ministry of Land and Resources has reported that total shale gas technical reserves were 883 Tcf in 2012. China’s shale gas production in 2012 was 1.8 Bcf from test drilling in the Sichuan basin, falling far short of the Ministry of Land Resources’ earlier goals to produce 230 Bcf of shale gas by the end of 2015 and at least 2.1 Tcf by 2020, EIA said.

The Sinopec announcement gave a nod to the robust shale gas development that has taken place in the United States and what the growing supply of natural gas in North America means for the rest of the world. China aims to produce 6.5 billion cubic meters (229.6 Bcf) of shale gas by 2015, according to the country’s “Development Plan for Shale Gas,” which was launched in 2013.

“The international community widely believes that shale gas development is causing a revolution in the global energy field, which will not only increase natural gas production, but significantly impact the global natural gas market, energy supply patterns, climate change policy and even geopolitics,” Sinopec said.