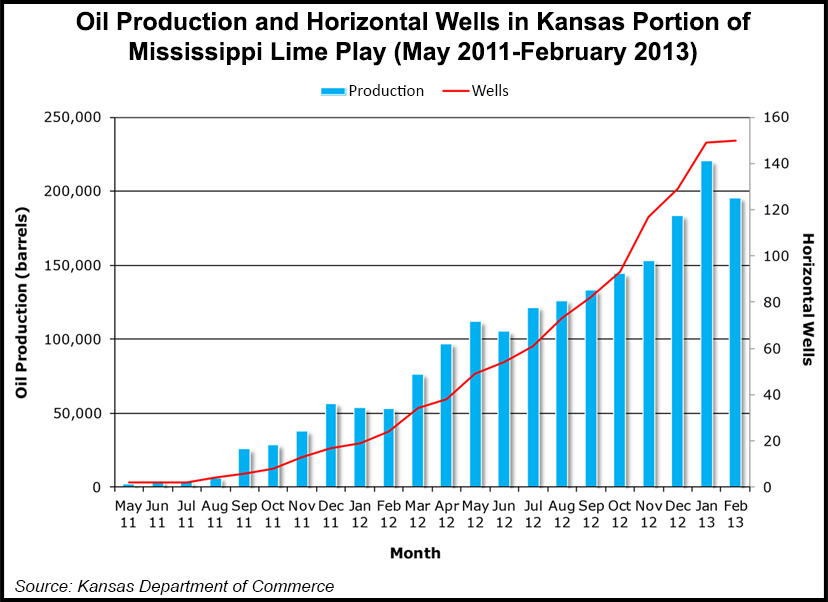 Sinopec, the largest petroleum products manufacturer in China, earlier this year agreed to pay Chesapeake $1.02 billion in cash for a half-interest in the acreage in northern Oklahoma (see Shale Daily, Feb. 26).

Chesapeake is to remain the operator and conduct all of the JV’s leasing, drilling, completion and marketing activities.

Unlike other onshore JVs, state-owned Sinopec isn’t paying a drilling carry, which proportions out financing over a period. Sinopec instead agreed to split project costs evenly with Chesapeake.

Sinopec is no newbie to the Mississippian. Last year a unit invested $2.2 billion to acquire a one-third interest in five of Devon Energy Corp.’s onshore ventures, including a stake in 210,000 net acres in the Mississippian Lime (see Shale Daily, Jan. 4, 2012). Some of the investment is to be used for future Devon exploration.

“Chinese companies are seeking to buy international oil assets and the U.S. stands out as one of the few places where you can do that at scale,” said VTP Capital’s Colin Smith. “As long as you are a minority partner, U.S. regulators seem to be fairly relaxed about Chinese companies buying stakes.”

Last month the International Energy Agency said China’s state-owned oil and gas operators would be producing an estimated 3 million boe/d outside of China by 2014, which is more than the current production of Kuwait. Sinopec obviously wants more than just the price of admission, and technology undoubtedly holds the key for the Mississippian, which extends across parts of Oklahoma and Kansas.

“The Mississippian is different from other major shale plays like the Bakken and the Eagle Ford in that it’s not really shale; it’s a carbonate formation,” noted Motley Fool analyst Matt DiLallo. “This forces oil and gas companies to think differently about how to best develop the play, seen most readily in how these companies handle water.”

One of the big problems operators encounter when they develop shale resources is a lack of water, but that’s not a problem in the Mississippian. It’s just the opposite. A typical well in the Mississippian “only takes about 2.2 million gallons of water” to fracture, which is about half the amount needed for an Eagle Ford well. But the high water saturation in the Mississippian’s rocks has led operators to spend more on saltwater disposal wells.

“While that’s a big chunk of change for SandRidge, the system it has built has given the company a distinct competitive advantage as it develops the play,” noted DiLallo. Over the past year SandRidge has cut its trucked water volumes to about 1% from 8%, which has kept it from having to spend extra on trucking services.

Operators also are turning to oilfield service providers like Halliburton Co. and Schlumberger Ltd. “to help place wells that target the sweet spots of the play in order to optimize production,” he said of the Midcontinent system. “One of the keys has been to target deeper in the play so that the fracture height doesn’t grow into the more water-saturated rocks.”

Halliburton is using “magnetic resonance imaging logging, which helps producers identify water-free zones as well as target the most promising zones. Schlumberger is also working with customers to accurately characterize the reservoir to target the best quality areas of the play in order to maximize production. Together these two oilfield services providers are using technology to best unlock this play’s resources.”

These new technologies are helping operators keep the costs down and improve returns.

“SandRidge, for example, is finding the oilier spots in the play, which is why the company sees its overall Mississippian production growing by 60%; its oil and liquids production will grow by 64% this year,” noted DiLallo. “The bottom line is that technology is helping SandRidge and its peers by taking away a lot of the guesswork, leading to improved returns and more certainty.”