SilverBow Resources Inc. agreed to acquire Sundance Energy Inc. and key assets of SandPoint Operating LLC, a pair of Eagle Ford Shale oil and gas independents, for up to $440 million in total. 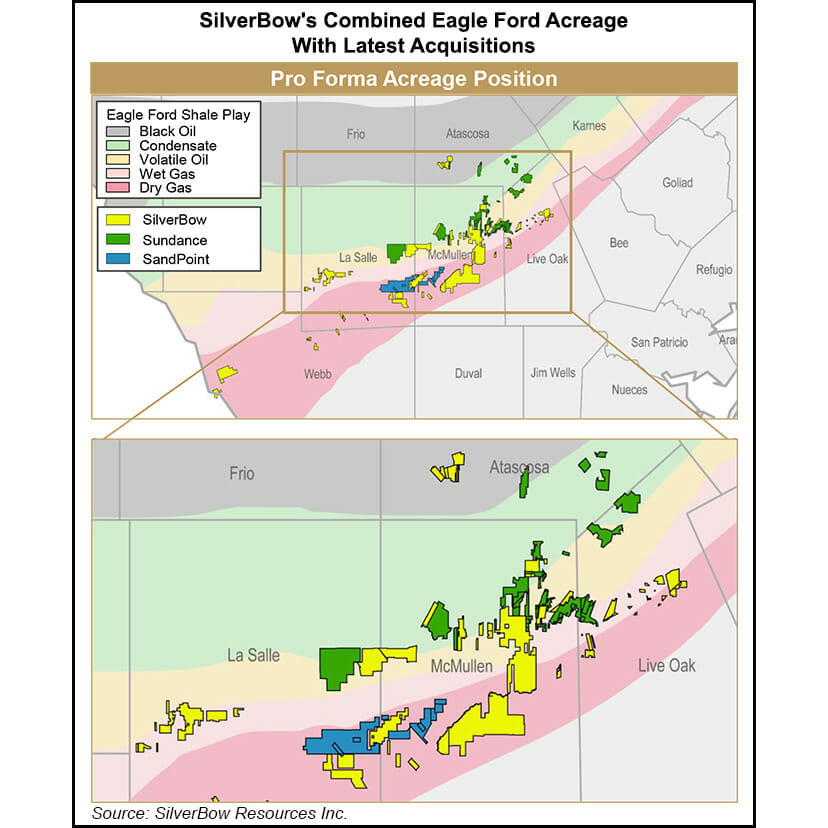 Houston-based SilverBow, an Eagle Ford pure-play, said Friday it would pay $354 million – plus up to $15 million of contingent payments based on future commodity prices – to buy substantially all of the assets of Sundance Energy Inc. and certain affiliated entities.

The transaction, expected to close in the third quarter, has been approved by the boards of both companies.

SilverBow simultaneously announced a $71 million deal to acquire certain assets from SandPoint Operating LLC, a subsidiary of SandPoint Resources LLC. That deal also was approved by the boards of both companies. It is projected to close in the second quarter.

These deals mark the fourth and fifth acquisitions SilverBow has announced since the second half of last year, which cumulatively total over $550 million of transaction value, said Sean Woolverton, SilverBow’s CEO.

“We are significantly increasing SilverBow’s size, scale and cash flow while maintaining a conservative balance sheet and a leverage ratio of less than 1.0x by year-end 2022,” he said.

Of the latest deals, he added, “there is strong industrial logic” because “the acreage overlap will allow SilverBow to drive synergies and optimize development plans…We have already identified approximately $15 million of annual synergies through a combination of operational and corporate efficiency gains.”

The SandPoint assets lie in contiguous acreage in La Salle and McMullen counties, with 27,000 net acres. Net production is estimated at 4,650 Boe/d (70% gas, 30% liquids) with two new wells expected to be coming online in the second quarter.

Pro forma for the transactions, liquids production will comprise a third of SilverBow’s production mix, Woolverton said, “allowing us to capture margin uplift from the current strength in liquids pricing.”

SilverBow, he added, “will now have even greater optionality to allocate capital between both oil and gas development, which has been a cornerstone of the company’s strategy over the last few years.”Looking ahead, Woolverton said, the “significant production and cash flow from existing wells” of the pro forma company, “coupled with a conservative balance sheet and ample liquidity, positions SilverBow to self-fund high rate of return projects and simultaneously further our consolidation efforts.”