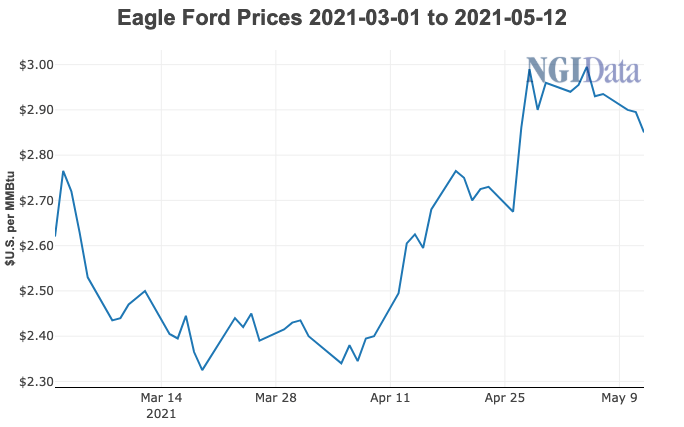 Executives highlighted recent well results and the outlook for 2021 during the recent first quarter earnings call.

During the first quarter the second La Mesa pad in Webb County was completed, achieving peak pad production of 90 MMcf/d over 30 days. Compared with the first La Mesa pad, drilling times fell by 10% and capital costs were 13% below forecast.

“Operationally, we continue to see strong performance from our first Webb County Austin Chalk well and plan to drill additional appraisal wells this year, with the goal of increasing our inventory with incremental, high-return locations,” CEO Sean Woolverton said.

“Our plan entering 2021 intentionally included breaks in our drilling program to allow us to assess market conditions and optimize our development plan real-time,” he said.

Because of the “significant improvement in oil prices over the first quarter, we have allocated capital to drill more oil locations this year than initially planned.” The shift in capital is designed to improve cash flow, Woolverton told investors.

“We recently picked up a drilling rig, ahead of our planned summer schedule. Our capital budget remains at $105 million at the midpoint, while factoring in our expanded oil development. This is made possible by the improved efficiencies and strong returns we have delivered to-date, and the application of those efficiency learnings going forward…

“As always, our strategy is based on the flexibility to quickly adapt our development toward the highest rate of return opportunities.”

SilverBow during 1Q2021 drilled one well and completed seven wells in a gassy section of Webb County. Six of the completions were part of the second La Mesa pad, which was drilled late last year. The wells, brought online 15 days ahead of schedule, achieved an average pad production rate of 84 MMcf/d over the first 30 days.

Like its peers, the extreme cold weather during February temporarily impacted first quarter production. SilverBow estimated the hit reduced output by 2 MMcfe/d. Some gas sales also were “exposed to the unprecedented volatility in daily spot prices during the cold weather event,” which resulted in “unusually high” realized prices.

Additionally, facility hookup costs per well have been cut by $40,000 on average “through improved design processes and utilizing vendors with greater scale and volume discounting.”
In April SilverBow began its mid-year drilling program, which is designed to target oil- and condensate-heavy areas of McMullen and La Salle counties in South Texas. One drilling rig then would be released in August, with developed wells brought online by the end of September.

Drilling then is set to resume in the last three months of this year “with a focus on its high-return gas assets.”

For the second quarter, SilverBow estimated production of 201-213 MMcfe/d, with natural gas volumes expected to comprise 82% or 165-175 MMcf/d of total production at the midpoint.