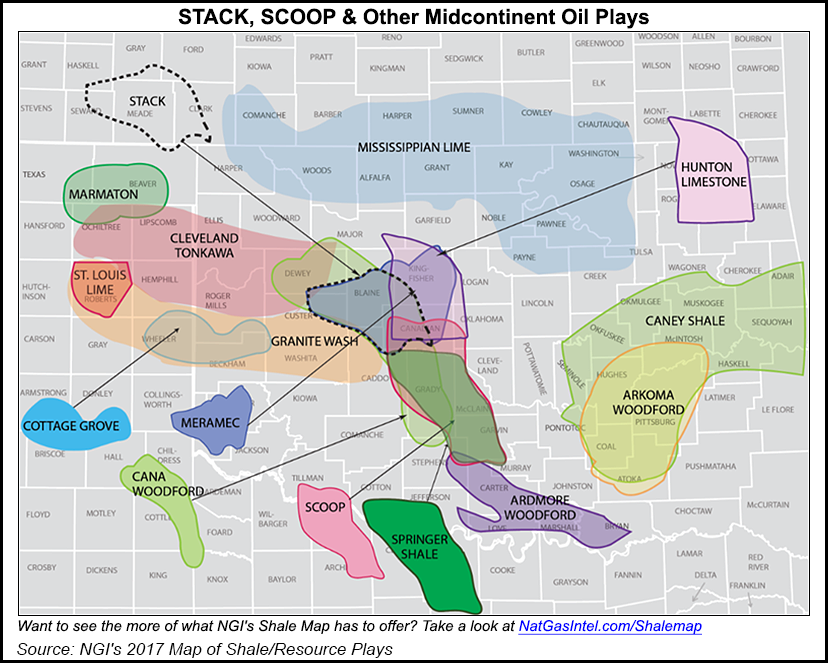 Alta Mesa and Kingfisher’s properties are concentrated in the Sooner Trend of the Anadarko Basin, mostly in Canadian and Kingfisher counties (STACK).

“We formed Silver Run II with the objective of acquiring low-breakeven, stacked-pay, oil-weighted assets, preferably with an integrated related midstream platform,” Hackett said. “The combination of Alta Mesa and Kingfisher is a perfect strategic match for our desired integrated platform.”

Silver Run, an energy-focused special purpose acquisition company, was formed earlier this year by Riverstone Holdings LLC with Hackett in charge. Hackett served as Anadarko CEO until May 2012 then retired as executive chairman in 2013, initially to obtain a master’s degree in theological studies at Harvard Divinity School.

The “pure-play STACK upstream and midstream company” would be “the first of its kind in the public markets, and we believe it creates significant advantages for both organic and inorganic growth for our stockholders,” Hackett said.

Houston-based Alta Mesa’s core acreage position is in northeastern Kingfisher County, with “among the lowest breakevens in the U.S. at around $25/bbl,” he said, while Kingfisher Midstream “adds a highly strategic and synergistic midstream subsidiary with significant additional third party growth potential.”

“Importantly, the current owners of Alta Mesa and Kingfisher are investing alongside Silver Run II’s stockholders by committing to hold significant amounts of equity in the combined company.”

Once combined, Silver Run would be rebranded as Alta Mesa Resources Inc. and trade on Nasdaq under “AMR.” Hackett is to become executive chairman while Alta Mesa CEO Harlan H. Chappelle would continue as chief executive with his current executive team COO Michael E. Ellis and CFO Michael E McCabe.

“We see this as a tremendous way to continue our evolution as a low-cost, high-value producer in the STACK,” Chappelle said. “We have been fortunate to have strong financial partners in HPS Investment Partners and Bayou City Energy during a pivotal stage of growth, and we are well-positioned for this next stage.”

Founded in 1987 by Ellis, Alta Mesa today has close to 120,000 contiguous net acres and nearly 4,200 gross drilling locations. Since 2012 it has drilled to total depth 205 STACK horizontal wells to delineate and derisk around 300 square miles of the formation. The operator also has completed 173 wells, including 167 producing.

Based on production through the second quarter, Alta Mesa said estimated ultimate recoveries at year-end should exceed 650,000 boe/well, or around 140 boe/foot of lateral.

Alta Mesa is Kingfisher Midstream’s anchor producer. Kingfisher, formed by HPS Investment Partners and ARM, has assets that include more than 300 miles of pipeline, 50,000 bbl of crude storage capacity and 60 MMcf/d of natural gas processing capacity, with an additional 200 MMcf/d cryogenic plant expansion expected to begin operations late this year.

Kingfisher has close to 300,000 gross dedicated acres from Alta Mesa and five other third-party customers.

ARM Energy Holdings LLC CEO Zach Lee said “downstream intelligence and in-depth fundamentals analysis identified the STACK play early as a rapidly growing region in need of midstream infrastructure and proactively solved for a takeaway solution for its producer partners, chief among them Alta Mesa as one of the most active and successful drillers in the play.

“We have experienced firsthand the production growth Alta Mesa has been able to achieve and are pleased to be a shareholder and continue our partnership with our existing financial partner, HPS Investment Partners, as well as Silver Run II, Riverstone and Alta Mesa.”

The transaction, set to be completed by year’s end, is subject to the approval of Silver Run stockholders and satisfying other customary closing conditions.