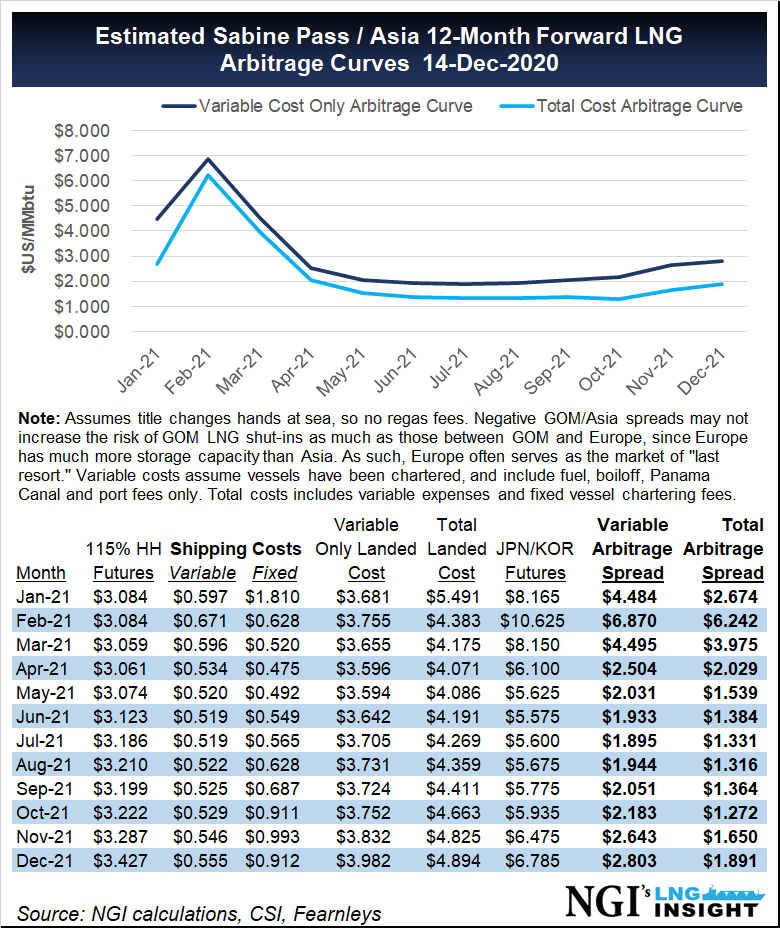 “Thus, we assume near max utilization rates of U.S. LNG export facilities next year and see Asian demand supporting Henry Hub prices above $3/MMBtu in the summer,” they said.

Combined gas intake at the six U.S. LNG export terminals has recently averaged more than 11 Bcf/d, according to NGI data.

An estimated 165-200 U.S. LNG cargoes were cancelled earlier this year as depressed demand from the Covid-19 pandemic and other factors drove Asian and European benchmarks down to parity with Henry Hub prices for much of the summer, in the range of about $1.50-2.00/MMBtu. Even though the long-term, take-or-pay liquefaction fees of $2.25-3.50/MMBtu that U.S. LNG customers pay are sunk costs, customers would still cancel U.S. cargoes if the arbitrage between the U.S. and other markets would be less than their respective spot shipping and other variable costs.

According to NGI data, the projected arbitrages from the Gulf Coast to Asia or Europe are both at least $1/MMBtu for all of 2021, with significantly higher arbitrage opportunities in the winter and fall.

Spot LNG prices for delivery to northeast Asia in January were $8.075/MMBtu on Dec. 11, according to NGI data. The BofA analysts said they expect the February Japan Korea Marker (JKM) contract, which is currently trading at about $9.20/MMBtu, to drop to about $7/MMBtu as more supply becomes available. Prices have increased significantly as liquefaction outages and maintenance worldwide have driven LNG supply shortages heading into the winter heating season, especially in the Pacific Basin.

Gulf Coast export arbitrages to Asia have widened recently to more than $3/MMBtu on JKM strength and Henry Hub weakness, “encouraging all possible US swing volumes to set sail for the Pacific,” the BofA analysts said. The surge in Asia-bound U.S. cargoes has delayed waiting periods to cross the Panama Canal to as long as 10-15 days, from previous waits of four or five days, they said.

European LNG imports are significantly lower than year-ago levels, as European gas storage remains above the five-year average and LNG traders do not need to dump cargoes there as a last resort. European Union gas storage was about 81% full on Dec. 12, according to NGI data.

“As such many participants are pulling volumes from storage instead of importing additional LNG,” the analysts said.

The analysts said the spread between the JKM and Dutch Title Transfer Facility spot prices will narrow as incremental LNG supply arrives in Asia.