Sidewinder Drilling Inc., a privately held upstart that’s been in the unconventional drilling game for a little more than a year, on Tuesday said it had a $242 million definitive offer on the table for Fort Worth, TX-based Union Drilling Inc., which operates across the U.S. onshore. 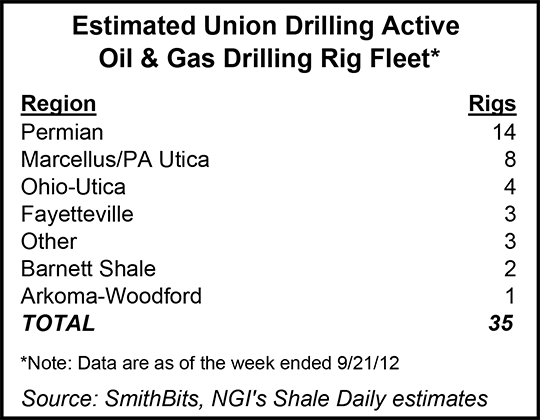 The Houston-based land drilling services company, controlled by Avista Capital Partners, launched in April 2011; Union, which now has 53 land drilling rigs, has been in business since 1997.

Union’s principal operations are in the Appalachian Basin, extending from New York to Tennessee and including the Marcellus, Huron and Utica shales; the Arkoma Basin in eastern Oklahoma and Arkansas, including the Fayetteville, Caney and Woodford shales; the Mississippian Lime in central Oklahoma and southern Kansas; the Barnett Shale; and the Permian and Delaware basins.

As of Sept. 21, Union Drilling had 14 rigs operating in the Permian Basin, eight in the Marcellus Shale and Pennsylvania Utica, four in the Ohio Utica, three in the Fayetteville, two in the Barnett, one in the Arkoma-Woodford and three elsewhere.

Under terms of the agreement, Sidewinder subsidiary Fastball Acquisition Inc. would pay about $6.50/share in cash for all of Union’s outstanding shares. Union was trading up at around $6.47/share on Nasdaq at midday Tuesday.

Shareholders representing the majority of Union’s stock (51%) have voted in favor of the transaction, which is expected to close by the end of the year.

“This transaction with Sidewinder recognizes the value of Union Drilling’s land drilling equipment, scale, scope of operations and its talented and hard-working employees,” said Union CEO Christopher D. Strong. “It also delivers a significant premium to our loyal shareholders and allows our employees to continue to deliver on our strategic goal of revitalizing our fleet and investing in people, processes and equipment.”

Sidewinder has obtained fully committed financing, and the transaction is not subject to a financing condition.

Sidewinder was established last year by the Houston-based management team of offshore services operator Scorpion Offshore Ltd., which was taken over by Norway’s Seadrill Ltd. in May 2010.