Gulf South Pipeline Co. LP, a “web-like” interstate natural gas pipeline system bordering the Gulf of Mexico, has stirred up a firestorm among its myriad distributor and producer customers with its first new rate filing in 17 years, which includes higher rates and a new zone system. 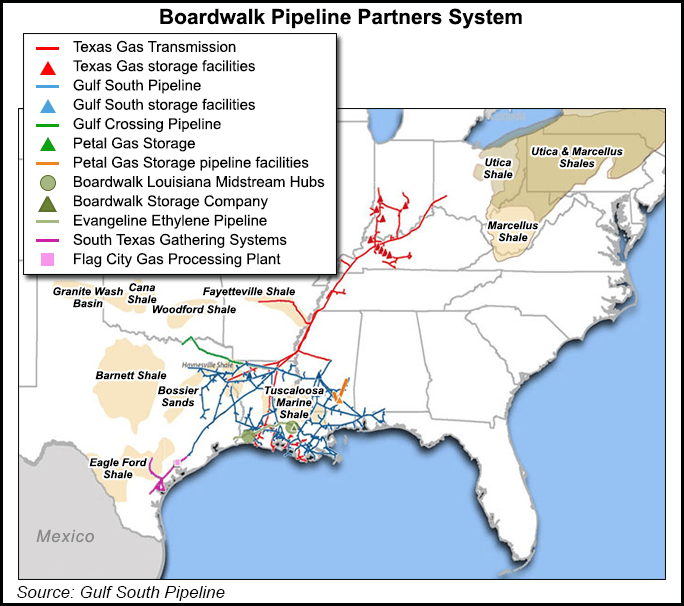 operating in the region, and new “shale gas production, particularly from the Marcellus and

The interconnect with Texas Eastern Transmission at Kosciusko, MS, historically one of the highest-value delivery markets on Gulf South’s system, has lost value because of a glut of gas supplies available in the Northeast. “As more gas from the Marcellus and Utica Shale regions moves south, pipelines which were once delivery markets for Gulf South will begin delivering increasing volumes of gas into Gulf South’s markets.” The average return on equity for Gulf South, a subsidiary of Boardwalk Pipeline Partners LP, since its last rate case was 6.1%, the pipeline said, compared to its authorized return of 12.25%.

One of Gulf South’s main functions has been as a backbone pipeline that delivers gas from the Gulf Coast region from Texas to Alabama into other major interstates serving all major U.S. markets. During 2011 and 2012, about 73% of Gulf South’s total throughput, including lease volumes, was delivered to other interstate pipelines for redelivery to off-system markets. It also functions to serve gas distributors in its local markets.

Its new rate proposal would reduce the pricing zones from five to three, including one Mainline Zone, one distribution or Local Zone and a separate Lake Charles Zone.

have protested what they claim is an increase in rates for no-notice service applicable to the Distributor Coalition by over 235%, a roll-in of the costs of expansion facilities that it previously claimed were not needed to serve existing shippers and development of rate zones based on the size of pipeline facilities rather than the distance over which gas is transported, which results in significantly increased rates.

companies and municipal utilities from its system.” The distributors said the new rate filing followed on the Commission’s refusal to allow the abandonment of substantial portions of its legacy system.

Indicated Shippers, a group including Anadarko Energy Services, BP Energy, ExxonMobil Gas & Power Marketing Co., Shell Energy North America (US), L.P., and Shell Offshore Inc., also protested the reduced zone system, “where a mainline or local shipper pays the same amount, regardless of geographic location on the mainline. Distance is no longer a factor in the design of Gulf South’s rates.”

“Gulf South proposes a daily demand rate of $0.4235 per Dth for firm transportation service on its newly defined Mainline Zone. This represents a near doubling as compared to the average maximum tariff rate QEP Energy currently pays under Gulf South’s existing zone structure.

The Salt Lake City-based company estimates the impacts of discount and discount-type adjustments on the proposed Mainline Zone daily demand rate to be:

While Gulf South claims it is entitled to the discount-type adjustment because it used negotiated rates to meet the competition, its customers claim the pipeline chose to use negotiated rates to facilitate construction of its 2008 expansion facilities. “In doing so it oversized the facilities (using 42-inch pipe) in an attempt to achieve a dominant position in the Carthage to Perryville/Transco 85 market.”

In approving the 2008 expansion the Federal Energy Regulatory Commission had noted that the facilities were not fully subscribed, but it approved them “on the theory that Gulf South was prepared to bear the risk that it might not sell all the new capacity at fully compensatory rates. Gulf South should not now be allowed to point to the existence of vigorous competition in an overbuilt market, to which it contributed, in order to justify extraordinary rate treatment that would shift the cost of competing from Gulf South to its recourse rate shippers,” QEP said.