The plan by sponsors of the $1.27 billion, 500-mile long Midcontinent Express system to lease 500,000 Dth/d on the Enogex system in Oklahoma as part of their project has stirred up opposition from current Enogex customers who say the lease is discriminatory since they have been unable to get firm transportation on the intrastate line.

Additionally, the shippers said the rates they pay for interruptible transportation (IT) service could wind up being higher than those charged the new pipeline for firm transportation (FT), depending upon the outcome of a recent Enogex request to increase IT rates.

The complaints filed Monday at the Federal Energy Regulatory Commission encompass both Enogex’ request for permission to lease 500,000 Dth/d to the proposed Midcontinent Express Pipeline (MEP) [CP08-9] and 165,000 Dth/d to the proposed Gulf Crossing Pipeline [CP07-398]. Indicated Shippers opposing the capacity lease (Chevron Natural Gas and Marathon Oil Co.) said an Enogex request to increase interruptible service rates [PR08-1] in its east and west zones if granted would mean their interruptible service would cost more than what MEP and Gulf Crossing are paying for what amounts to firm service.

“Enogex has refused to provide a [Natural Gas Policy Act (NGPA)] Section 311 firm transportation service but, as demonstrated by the lease of capacity to MEP, Enogex is willing to provide the equivalent of a firm service though a lease agreement with MEP,” indicated Shippers said in their protest. “Enogex did not offer a firm lease agreement to existing Section 311 interruptible transportation (IT) shippers. The preferential treatment that Enogex has accorded MEP is further exacerbated by the fact that the proposed rate that MEP will pay for the lease capacity may be lower than Enogex’s Section 311 rates.”

Indicated Shippers asked the Commission to reject the lease or, alternatively, require Enogex to provide Section 311 FT service and to offer all existing Section 311 IT shippers the opportunity to convert their service to FT.

Also filing to intervene and protest, Oklahoma-based gas marketer Unimark LLC said that “if Enogex’s proposed [MEP] lease is approved, Enogex’s existing Section 311 shippers who desire the same quality of service as Enogex proposes to provide to MEP will be forced to contract for firm service with MEP, in addition to the Section 311 service they receive from Enogex, resulting in rate-stacking.”

And, midstream services provider ScissorTail Energy LLC said it already pays maximum rates for the majority of volumes it transports on Enogex and it is concerned a crediting approach Enogex uses to recover from its maximum rate shippers revenue shortfalls generated by its “apparently significant discounts under ‘many of the current Enogex contracts’ may result in both discriminatory and excessive maximum rate levels.”

ScissorTail also took issue with the MEP contract. “The result of this proposal, if approved, will be that Enogex will be providing higher priority service to one interstate user of its system which is not available to other interstate system users, at maximum charges significantly less than those applicable to the interstate services offered others purchasing inferior transportation.”

“Enogex has entered into these leases for firm service despite the fact that many existing shippers with Section 311 IT service want firm service on Enogex and are willing to convert their existing interruptible service to a firm service.”

The shippers said it is unduly discriminatory for Enogex to restrict to capacity leases its award of firm capacity for interstate transportation. “Furthermore, if Enogex wants to lease firm capacity instead of offering a firm transportation agreement, Enogex should have offered this option to all interested shippers, particularly its existing Section 311 IT shippers…”

The shippers went on to say that restricting FT to leases to interstate pipelines involves an improper tying of capacity on Enogex and MEP. “Because of the lease, a shipper that needs firm capacity on Enogex to move its production further downstream on another pipeline will have to buy capacity on MEP, even if the shipper would prefer to serve a market off a pipeline other than MEP.”

Thus, MEP has an unfair advantage compared to other pipelines that can take delivery of gas off Enogex, the shippers said, asserting that this is contrary to the unbundling required by FERC Order No. 636.

Exacerbating the failure of Enogex to award FT for Section 311 service is the fact that the company provides firm intrastate service, primarily for its affiliate OG&E, the shippers said. “This gives an unfair competitive advantage to intrastate service and to OG&E, in particular, as compared to interstate service for other shippers. This violates the Commission’s policy that a Section 311 pipeline cannot give preferential treatment to its intrastate service.”

Finally, the shippers said Enogex offered MEP a preferential rate for the FT capacity. They said that while Enogex said the rates are justified because they are not greater than its current Section 311 IT rate, “there is no justification for a lease rate for firm capacity that is not higher than (and that might be much lower than) the rate for interruptible capacity.

“In view of the lower quality of interruptible service as compared to firm service on Enogex, Enogex needs to justify why firm rates may be even less than rates for interruptible capacity.”

Enogex’s proposal to increase IT rates only exacerbates the preferential nature of the FT lease rates, they said. 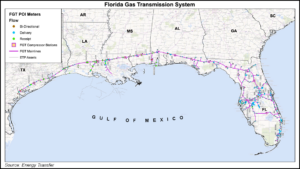 Energy Transfer (ET) said it experienced a natural gas release Thursday on an 18-inch diameter segment of its Florida Gas Transmission (FGT) pipeline, the second in about two weeks. The segment of pipeline, which runs along the Florida Turnpike, was shut in so ET could isolate the incident area and safely stop the flow of…