Natural gas futures plummeted on Monday, with a plethora of weak market signals – including the potential for five straight triple-digit storage injections – sending November prices as much as 46 cents below Friday’s close. The November Nymex contract ultimately settled Monday at $6.470/MMBtu, down 29.6 cents. 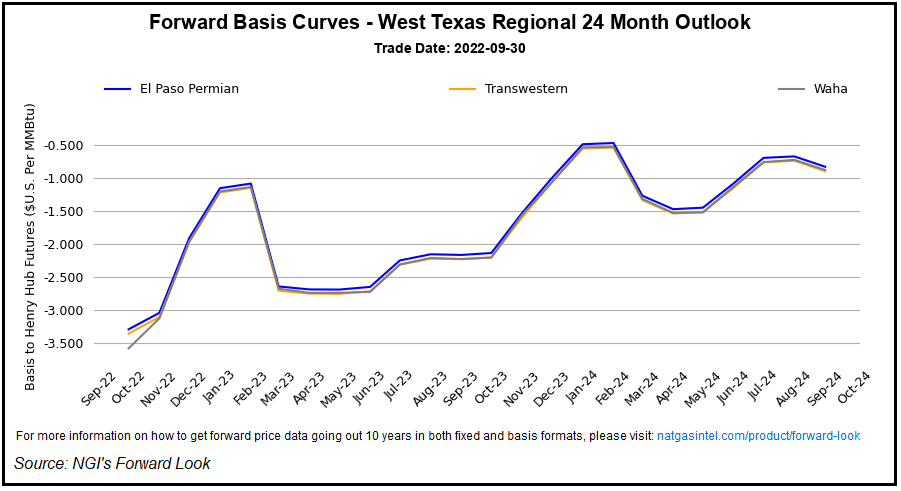 The losses in the futures market were fast and furious at the start of the week. The November Nymex contract opened Monday’s session at $6.800 but quickly lost ground as trading got underway.

Among the suite of bearish signals facing the gas market was a near-term weather forecast that does little to drum up demand. NatGasWeather said the coming work week would be “comfortable” across most of the country, with highs of 60s to 80s expected outside of California and the Desert Southwest. There’s also expected to be some cooler weather near the Canadian border, while wet conditions are likely to persist over the Mid-Atlantic Coast amid remnants of Hurricane Ian.

About 369,000 Florida Power & Light Co. (FPL) customers remained without electricity on Monday following the deadly storm, but the utility expects complete restoration to 95% of those by Friday. As of midday, FPL had restored power to 83% of affected customers.

Duke Energy Florida expected to have all affected customers restored by Monday night, except those in some “hard-hit areas that will require more extensive work.” All but 3% of Duke customers in North and South Carolina had their power restored by Sunday.

The death toll from the once Category 4 storm, which made initial landfall near Fort Myers, had risen to more than 100 as of Monday afternoon, according to officials in Florida.

Looking ahead, NatGasWeather said national demand was forecast to increase this weekend as a cooler-than-normal weather system tracks across the Great Lakes, Northeast and Mid-Atlantic. Showers and overnight lows in the 30s and 40s were expected to result in a minor increase in national demand.

“But as we’ve been mentioning, heating degree days this early in the heating season won’t translate to nearly as much demand as it would during the winter months,” the forecaster said. “And with the rest of the U.S. quite comfortable Oct. 7-9, national demand will be near seasonal.”

Against the backdrop of moderate fall weather, the supply side of the equation has improved in the early days of October.

Bloomberg data showed production at around 102.3 Bcf/d on Monday, off from above 103 Bcf/d over the weekend but still near record highs. The triple-digit output level added another layer of downside pressure to the prompt-month contract, with a portion of the added supply likely moving into storage given the mild weather in play.

EBW Analytics Group said early October production appears to have risen 1.0-1.5 Bcf/d over the September monthly average based on the Energy Information Administration’s 914 report. Gains would be consistent with very weak Henry Hub spot pricing demonstrated on Friday, where lows of $5.700 were seen for the benchmark.

Over the three months from April to July, production charged higher by 2.0 Bcf/d, the EIA 914 report shows. Gains were led by the Haynesville Shale (+0.21 Bcf/d per month), followed by a strong bounceback from late-winter lows across the Bakken Shale and Appalachia Basin.

These gains laid the groundwork for the late-summer explosion higher, according to EBW. If recent scrapes are accurate, production may have gained more from July to October (+4.0 Bcf/d) than year/year from July 2021 to July 2022 (+3.8 Bcf/d).

With supply rising and demand moderating ahead of colder weather this winter, EBW said the near-term fundamental outlook remains particularly weak. The next three EIA storage injections potentially could exceed 340 Bcf – “putting the market on pace to halve the storage deficit versus the five-year average to approximately 150 Bcf by the end of October,” according to EBW senior analyst Eli Rubin.

After back-to-back 103 Bcf injections, storage inventories stood at 2,977 Bcf as of Sept. 23. This is only 180 Bcf below year-ago levels but still 306 Bcf below the five-year average, according to EIA.

“While extended losses are possible, it remains early for a full capitulation for natural gas, and the market could reverse steeply higher at any point,” he said.

Spot gas prices were mostly higher on Monday, recovering from the typical slide ahead of the weekend.

Some of the largest price gains were on the East Coast, which is gearing up for its first taste of winter in the coming days. AccuWeather said highs would likely reach the 70s in the region through Wednesday, but an advancing cold front would usher in much chillier weather by Thursday.

“As a strong cold front moves through, the jet stream will quickly sink out of Canada and well south of the region, allowing polar air to spill southward and eastward,” AccuWeather senior meteorologist Mike LeSeney said.

Cold air is expected to arrive first in the western Great Lakes, according to AccuWeather. Lows in Chicago should reach into the 30s Thursday night, with temperatures near or below the freezing mark in northern Wisconsin and Michigan’s Upper Peninsula.

By Friday night, the cold air is set to cover a broader area and extend eastward to the Atlantic coast. Cities such as Chicago and Detroit, as well as portions of the Cleveland metro area, are likely to see their first freeze of the season, AccuWeather said. Parts of New England also may see their first freeze. Across the Northeast, the Mid-Atlantic and potentially as far south as northern Virginia, temperatures in the 30s are expected Friday night and Saturday morning.

The early cold blast was a boon to cash prices.

Most other U.S. locations followed the general uptrend, but most points in South Louisiana fell sharply amid the ramp in production and decline from peak summer heat. Henry Hub dropped 65.5 cents from Friday to average $5.635, while Pine Prairie tumbled 76.0 cents to $5.245.

The Permian Basin was another weak spot in the Lower 48 amid growing output and tightening takeaway. Next-day gas prices at Waha plugged 41.5 cents to average $2.915.

Meanwhile, El Paso Natural Gas (EPNG) was scheduled to cut westbound flows by as much as 101 MMcf/d because of maintenance on Line 1100 from Monday (Oct. 3) to Oct. 21. These flows are to be cut at the El Paso constraint, which represents the westbound flows that come from the Cornudas compressor station.

“It’s also worth noting that during Oct. 13-16, flows will likely be cut further” because of testing at the Wink station, said Wood Mackenzie analyst Quinn Schulz. “Over the past 30 days, the El Paso constraint has averaged about 985 MMcf/d and maxed out at 1.08 Bcf.”