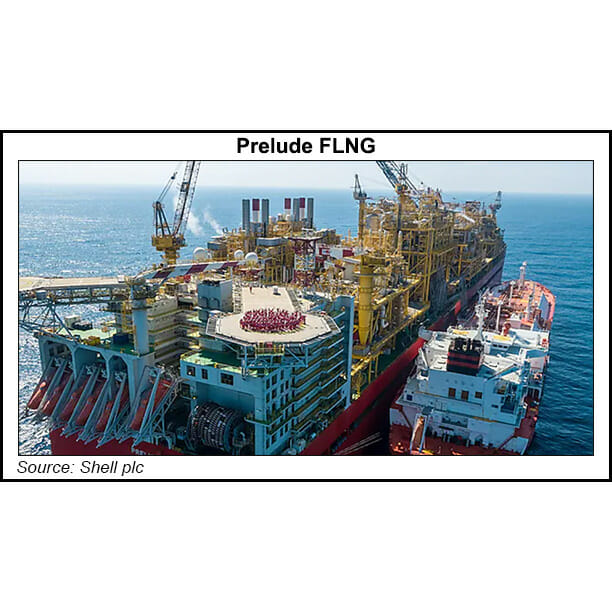 Shell said a small fire was detected on Dec. 21 in a turbine enclosure and quickly extinguished. However, liquefied natural gas production was suspended pending an investigation, the company said.

“We are working methodically through the stages in the process to recommence production with safety and stability foremost in mind,” a Shell spokesperson told NGI.

The company also is working with regulators to restart operations, but there is no timeline.

Prelude has the capacity to produce 3.6 million metric tons/year (mmty) of LNG. It mostly supplies cargoes to Asia, including Japan, South Korea and Taiwan. The latest outage comes amid mild winter weather and subdued buying in the region thanks to lower demand and healthy inventories.

Since ramping up in June 2019, the Prelude vessel has been plagued with operational issues. The vessel reentered service last April after it was forced to shut down following a fire in December 2021. It also canceled cargoes last summer amid a union strike that lasted for nearly three months. Last month’s fire also came after a lengthy stretch of maintenance that started shortly after the strike.

Shell is also experiencing an extended reduction in volumes exported from eastern Australia as it deals with maintenance issues at the Queensland Curtis LNG (GCLNG) facility.

One production unit at the 8.5 mmty facility on Curtis Island was shut down early last month after a minor issue with a pipe was detected during an inspection, a Shell spokesperson told NGI.

Maintenance to address the issue has been ongoing since early December and could extend into the second half of January, according to media reports. The spokesperson said the company could not comment on the timeline for a restart.