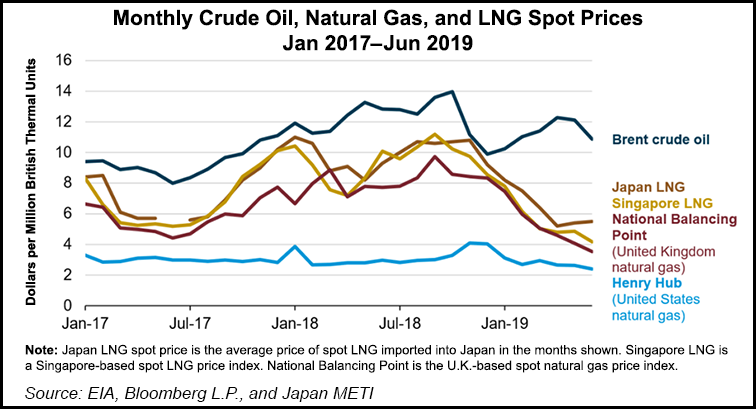 “We have delivered good cash flow performance, despite earnings volatility, in a quarter that has seen challenging macroeconomic conditions in refining and chemicals as well as lower gas prices,” van Beurden said.

In the Integrated Gas division, which includes liquefied natural gas (LNG) sales and volumes, earnings declined by 25% to $1.73 billion, while cash flow was up 15% to $3.4 billion.

Shell’s outlook for LNG markets in the mid- to long-term remains unchanged, CFO Jessical Uhl said during the conference call.

“I do still see a very strong growth, 4% a year compounded into the 2020s,” she said of the gas export market. “I think what we have to recognize is the weakness at the moment” demonstrated in the spot market.

“The short-term cargo market is very much the effect…of the ramping up of supply, which is happening,” Uhl said. “Also that’s coming, of course, at the same time, following on the heels of a relatively weak winter season in North Asia.”

As the largest LNG seller in the world, Shell also is committed to ensuring its gas cargoes have a low carbon footprint, van Beurden said.

Shell signed an agreement in June to deliver the “world’s first carbon-neutral cargoes” of LNG to both Tokyo Gas and Korea’s GS Energy, he said.

“We did it just using nature-based carbon credits to compensate for the carbon dioxide emissions that will be generated by these cargoes.”

Downstream earnings were off 8% at $1.07 billion, but cash flow from operations soared, up 142% to nearly $2.4 billion. Oil products sales volumes decreased by 2%, mainly because of lower trading volumes.

Shell achieved some “key milestones” between April and June, van Beurden said, including the start up of the Appomattox floating production system in the deepwater Gulf of Mexico (GOM) (79% control). Appomattox is the first commercial discovery brought into production in the Norphlet formation and has an expected peak production of 175,000 boe/d.

Shell, which operates and has a 67.5% stake in the Prelude project offshore Australia, in 2Q2019 launched the first LNG cargo for delivery to Asian customers, Uhl said.

As of Thursday, she said, Prelude has produced a total of three condensate cargoes, one liquefied petroleum gas cargo and four LNG cargoes, “demonstrating how it forms an integral part of our growing global integrated gas portfolio and should provide LNG for the coming decades.”

Prelude and Appomattox “add to our competitive portfolio, which is expected to generate additional cash in the coming quarters,” van Beurden said. “The resilience of our upstream and customer-facing businesses, and their ability to generate cash, support the delivery of our 2020 outlook, which remains unchanged.”

Shell Offshore Inc. on Thursday also sanctioned PowerNap, a subsea tie-back to its operated Olympus production hub in the deepwater GOM. The project, discovered in 2014 in the south-central Mississippi Canyon about 150 miles from New Orleans in 4,200 feet of water, is expected to start production in late 2021 and produce up to 35,000 boe/d at peak rates.

Shell estimated the forward-looking breakeven price of PowerNap would be less than $35/bbl. The project currently is estimated to contain more than 85 million boe recoverable resources. Production would be transported to market via the Mars pipeline, operated by a Shell subsidiary.

The Libra Consortium, in which Shell is a 20% stakeholder, also was sanctioned during the second quarter to contract the Mero 2 floating production, storage and offloading vessel for the Mero field offshore Brazil in the Santos Basin. The vessel can process up to 180,000 boe/d.

Shell’s current cost of supplies, which mirrors U.S. net income performance, fell 42% year/year to $3.03 billion (37 cents/share) from $5.24 billion (72 cents). Impairments and write-offs totaled $479 million, mainly for assets in Trinidad and Tobago and in Australia, as well as the loss of $112 million related to commodity derivatives.

The supermajor also has begun another tranche of its share buyback program, with plans to purchase up to $2.75 billion through October. Since the buybacks began, Shell has bought back an estimated $9.25 billion of its shares.