Royal Dutch Shell plc said its Integrated Gas trading results for 1Q2021 fell “significantly below average,” in part because 80% of last year’s liquefied natural gas (LNG) term sales were oil-price linked, with a lag of up to six months. 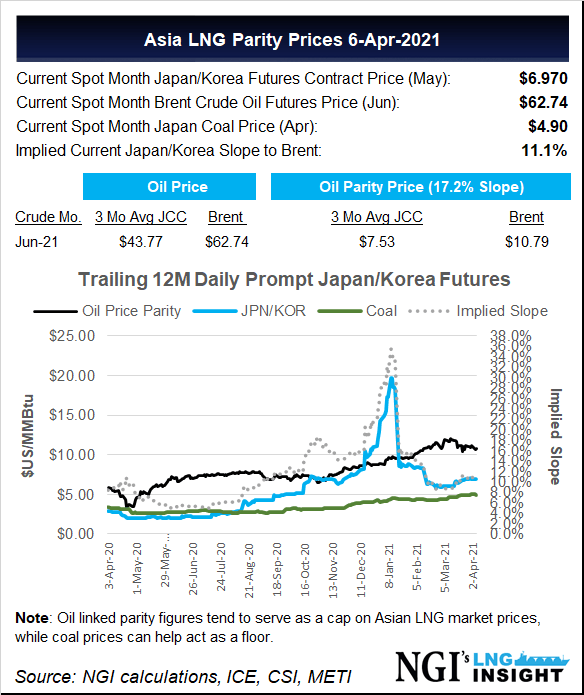 In a preview of quarterly results issued on Wednesday, the energy major said Upstream and Integrated Gas segment production overall should average about 3.38 million boe/d. Prior midpoint guidance was closer to 3.43 million boe/d.

For Integrated Gas, production averaged 920,000-960,000 boe/d. Liquefaction volumes are forecast to total 7.8-8.4 million metric tons (mmt) for 1Q2021, versus prior guidance of 8.0-8.6 mmt. The volatility of Japan Korea Marker spot gas prices in January “had limited impact” on profits.

“Most of the LNG that we sell is on term contracts,” CEO Ben van Beurden had noted during the 4Q2020 conference call. LNG results “move with the oil price by and large,” and the results are based on an oil price typically four to six months ago. The delay effect in the oil price macro then feeds into the quarterly Integrated Gas segment results.

Shell, like other operators that work in Texas, took a hit operationally from the winter storm that slammed the state during February.

The decline in output from the Upstream segment was traced partly to the wintry weather, which resulted in taking out around 10,000-20,000 boe/d, Shell noted. Corporate-wide, the storm is forecast to total around $200 million in adjusted earnings, with a $40 million hit to Upstream profits and a limited impact for Integrated Gas.

Upstream profits are forecast to be positive in 1Q2021, “capturing the upside from the current commodity price environment.” Output averaged 2.4-2.48 boe/d in the first quarter. About 10,000-20,000 boe/d was taken out by the Texas storm’s impact on operations.

In the Oil Products segment, refinery utilization is expected to average 71-75% for 1Q2021. Shell’s prior guidance had been 77% at the midpoint. Margins are forecast to be slightly better, with a refining indicative margin of $2.60/bbl versus $1.60 in 4Q2020.

Sales volumes are seen averaging 3.7-4.7 million b/d, off from guidance of 4.0-5.0 million b/d. The Oil Products segment also expects to record a $80 million revision for operations impacts from the Texas storm.

For the Chemicals segment, utilization for 1Q2021 is pegged at 77-81%, compared with initial guidance of 80-88%. Sales between January and March averaged 3.5-3.7 metric tons, compared with guidance of 3.6-3.9. Again, the Texas storm was blamed for negatively impacting earnings by about $60 million.