Four companies recently were cleared by the Federal Aviation Administration (FAA) to fly commercial drones, including one that will be conducting flyovers of Gulf of Mexico (GOM) oil and gas structures for a unit of Royal Dutch Shell plc. 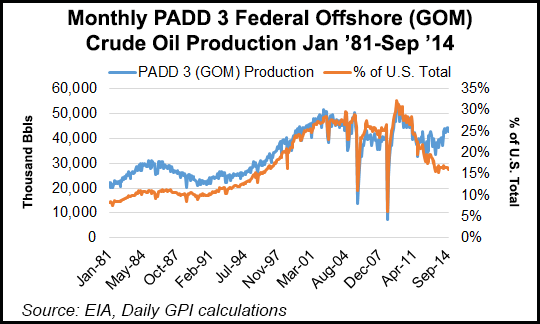 VDOS Global LLC, which provides unmanned aerial vehicle (UAV) inspection services and data collection, was given a waiver by the FAA allowing the Corvallis, OR-based company to pioneer the aerial sensor technology for offshore inspections.

VDOS plans to fly Aeryon SkyRanger drones to inspect flare stacks for Shell in the GOM. Collaborative efforts between VDOS and Shell are to advance the use of robotics for safety and reduce potential hazards to personnel, said VDOS CEO Brian Whiteside, who founded the company in 2011. Whiteside is a former U.S. Navy pilot.

“With more than 3,500 potential inspection sites in the Gulf of Mexico alone, VDOS anticipates significant demand to perform inspections that are time- and cost-intensive for oil and gas producers,” he said.

UAVs, also known as unmanned aerial systems (UAS), use high definition and thermal imaging to detect faults, corrosion and other signs of deterioration, while posing no additional risk to humans and without interrupting operations. Results may be interpreted immediately, giving operators the upper hand in the event of an emergency, Whiteside said.

ConocoPhillips Alaska in 2013 received a restricted certificate from FAA to use commercial drone technology that allowed testing over the Chukchi Sea. The initial flight for ScanEagle Inc. by Boeing Co.’s Insitu Inc. was in September 2013 and conducted about 120 miles offshore Wainwright, the producer said.

ConocoPhillips’ drone weighed about 40 pounds and was designed to fly up to 18 hours on a gallon and a half of fuel. The ScanEagle launched from a research vessel and “zoomed off a catapult and into the rainy Arctic skies” for 36 minutes, FAA said. Arctic flights are said to be ideal for drones because of low population and low levels of ship and air traffic.

“Small UAS in the Arctic can benefit many operations, such as scientific research, search and rescue, fisheries, marine mammal observers, oil and gas leaseholders and maritime route planners,” FAA said.

Houston’s Apache Corp. also is benefiting from the use of UAVs, which are proving to be a boon to operations management in addition to improving safety. Apache has used the technology to conduct inspections of flare stacks at a natural gas plant in Northern Scotland.

Manned inspections routinely require planned shutdowns of facilities that may take a month or more. Drones inspections, however, take two days to complete, a “significant cost savings,” according to Apache.

Texas consortium Lone Star UAS won approval last to operate one of six FAA-approved test sites. The designation allows for fast-track drone testing by participants that include Texas A&M-Corpus Christi, which is the lead institution for Lone Star. Industry is lining up at the door, said a university spokesman.