Shell Chemical Appalachia LLC’s decision to build a multi-billion dollar ethane cracker in Western Pennsylvania marks the first time in more than 20 years that such a facility has been built in the United States outside of the Gulf Coast. 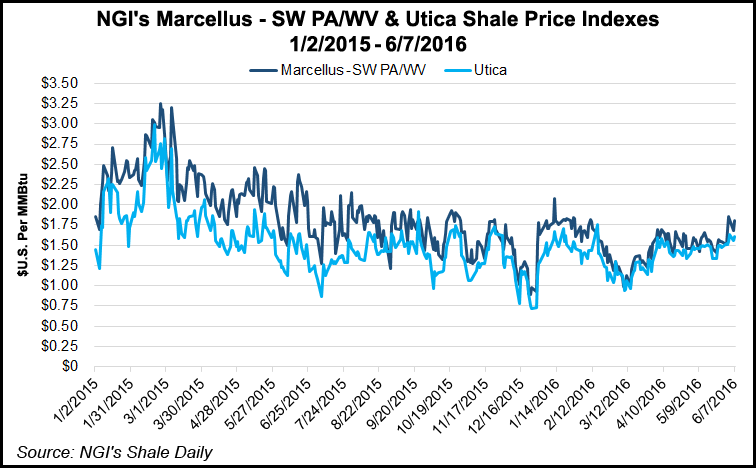 The company’s announcement on Tuesday was hailed by those throughout Ohio, Pennsylvania and West Virginia as a watershed moment in the evolution of the Marcellus and Utica shale plays. Shell’s historic decision, sources said, lays the groundwork for the future of supply and demand, opens the door for similar facilities to be built and clears a path for the creation of what could be thousands of ancillary jobs in the region.

“Shell’s decision to move forward with its Western Pennsylvania ethylene cracker marks a major turning point for the region,” Consol Energy Inc. said. “Since unconventional shale gas began to flow from the Appalachian Basin over a decade ago, the buildout of large-scale, end-use opportunities have been critical in realizing the generational benefits of the vast resource that lies beneath our feet. Today, those benefits and the opportunity to build and sustain a new middle class in our region are becoming reality.”

Consol has signed an agreement to supply Shell’s cracker with ethane. The facility would be built on a 400-acre site adjacent to the Ohio River in Potter and Center townships in Beaver County, about 30 miles northwest of Pittsburgh. With a capacity to produce 1.6 million metric tons/year (mmty) of polyethylene and 1.5 mmty of ethylene, which are key building blocks for plastics, the facility is expected to employ 6,000 during construction and another 600 permanent employees once it’s operational sometime in the early 2020s.

“The pieces of the puzzle are falling into place. You’ll see increasing demand from Gulf Coast crackers that will come online next year and now Shell’s cracker in the Northeast is an additional source of demand,” Miller said. “The outlook is getting better for ethane pricing. It’s not going to completely change the economics for drilling for wet gas in Southwest Appalachia, but it should improve breakeven economics and rates of return by an amount that’s not completely insignificant.”

As the commodities downturn has dragged on, a majority of the Appalachian Basin’s leading producers have retreated almost exclusively to their dry natural gas acreage, where low breakeven prices and prolific wells have outperformed wetter assets and helped to defend against the downturn (see Shale Daily,April 7). Ethane has sold for pennies on the dollar in recent years. Mont Belvieu, TX, spot prices on the Chicago Mercantile Exchange have consistently settled at less than 20 cents/gallon since 2014.

Ethane is a major part of the gas stream in Appalachia, accounting for more than 50% of production in some of the wells there.

“Producers haven’t been getting much for it,” Miller added. “They’ve actually been figuring out how to dispose of it in some cases. This [cracker] could help move rates of return up by 10% where producers, for instance, might break even at a price closer to $2.20 rather than $2.50.”

The facility would join a growing list of midstream options for Appalachian liquids production, as well. The 1,230-mile Appalachia-to-Texas Express ethane pipeline entered service in 2014 (see Shale Daily, Dec. 5, 2013). Sunoco Logistics Partners LP is also delivering ethane and propane from Western Pennsylvania to the Marcus Hook Industrial Complex near Philadelphia for export overseas. Sunoco plans to bring its Mariner East 2 pipeline into service in 2017 to carry more natural gas liquids (NGL) from Ohio and Pennsylvania to Marcus Hook, and it is gauging interest in a third pipeline (see Shale Daily, Feb. 26).

Among other projects, Mountaineer NGL Storage LLC said last month that it received requests for more than three times its initial planned capacity in Ohio during a nonbinding open season (see Daily GPI, May 25).

A bump in ethane prices, Miller said, could occur as early as 2017. In the Appalachian Basin, Ohio Oil and Gas Association Executive Vice President Shawn Bennett said Shell’s facility “creates a market for ethane right here in Ohio.” Having a local end-user would cut transportation costs and make the product more marketable, he said.

“By the time they pay for [ethane] transport, producers have been getting very little netbacks,” said Danielle Sandusky, principle at Level 2 Energy, an energy market analysis website that also offers hedging and risk management services. “The economics haven’t justified spending the money to pursue wet gas and it’s one of the reasons you’ve seen this push into dry gas where these guys are getting massive estimated ultimate recoveries instead of pursuing wet gas.”

Shell’s facility is one of five that have been proposed for the Appalachian Basin (see Shale Daily, Sept. 3, 2015; May 21, 2014; Nov. 14, 2014; Jan 19, 2012). In 2012, Aither Chemicals LLC said it would construct a $750 million cracker that would utilize Marcellus ethane, but never identified a site and has mentioned little about the proposal since. Appalachian Resins Inc. in 2013 said it would construct a small-scale 15,000 b/d facility in Monroe County, OH, but later said it would put those plans on hold after Thailand’s PTT Global Chemical (PTTGC) pcl said it would spend $100 million on preliminary design work for a multi-billion dollar facility in Belmont County, OH.

Like PTT’s proposal, Odebrecht SA, through its petrochemical affiliate Braskem SA, announced plans in 2014 for a facility in Wood County, WV, that would be comparable to Shell’s cracker. Odebrecht said last year that it would postpone its plans for the West Virginia facility pending further project analysis amid the commodities downturn (see Shale Daily, April 23, 2015).

“In my opinion, I think it bolsters Ohio’s position in acquiring a cracker,” Bennett said. “What you have is Shell has done the due diligence, assessed the resource viability in the region. The ethane is here and logistically it works out. They’re moving forward, and that opens the door to other projects.”

Executive Director of the West Virginia Oil and Natural Gas Association Corky DeMarco agreed with Bennett even though he had hoped his state would land the region’s first cracker.

“I certainly would have wanted the first cracker in West Virginia, given that people were talking about this back in 2009,” he said. “But I think this shows people that there is the supply here and having the commitment up here, I think, will increase the likelihood of other commitments. I’ve always thought once the first one is committed, then a bunch of folks will say we better get there before someone else does.”

Braskem spokesperson Stacy Torpey said the company had no comment about Shell’s FID but added that plans for its cracker in West Virginia remain unchanged. PTTGC spokesperson Dan Williamson expressed a similar sentiment and said Shell’s announcement has no bearing on the company’s plans.

“Shell’s decision to move forward with its project in Pennsylvania will have no impact on our process,” Williamson said. “There are rich feedstock resources in this region of the United States, which are closer to our project compared to projects on the Gulf Coast and other regions of the country. Our front-end engineering and design process continues to move forward, and we look forward to making a final investment decision early in 2017.”

When Shell’s cracker is completed, both DeMarco and Bennett said thousands of other downstream jobs should be created in the supply chain and in regional manufacturing. Allegheny County Executive Rich Fitzgerald said the project is “monumental,” likening it to the construction of 25 large stadiums. Allegheny Conference on Community Development CEO Dennis Yablonsky said the cracker is the largest single ‘from the ground up’ industrial investment in the Pittsburgh region in a generation.”

Shell floated the idea of constructing an ethane cracker in Pennsylvania in 2011 and signed a site option agreement for a former zinc smelting plant in 2012 in Beaver County (see Daily GPI, March 16, 2012; June 7, 2011). Shortly after the company made its announcement, the Pennsylvania Economy League released a study that said the cracker could create annual economic output of $4.8 billion.

The American Chemistry Council said Tuesday that 262 chemical industry projects valued at $161 billion are completed, under construction or planned for the United States. The new factories and capacity expansions could create $105 billion in annual chemical industry output and 738,000 permanent jobs throughout the country by 2023.

What’s more, several of the world’s largest polymer companies are located in Northeast Ohio, including Goodyear Tire and Rubber Co., Parker Hannifin Corp. and PolyOne Corp. The Pittsburgh region is also home to more than 100 plastics-related companies that employ more than 5,000 people, according to the Pittsburgh Regional Alliance, an economic development organization.

“I think they believe they have the supply and that they can get it at an advantaged price,” Miller said, when asked what factored into Shell’s announcement after five years of decision-making. “When making this evaluation, I’m sure they were considering the supply side and there is a fair bit of demand in the Northeast market.”