A U.S. unit of Royal Dutch Shell plc has hit another discovery in the Norphlet formation in the eastern deep waters of the Gulf of Mexico (GOM), its third successful well in the play. 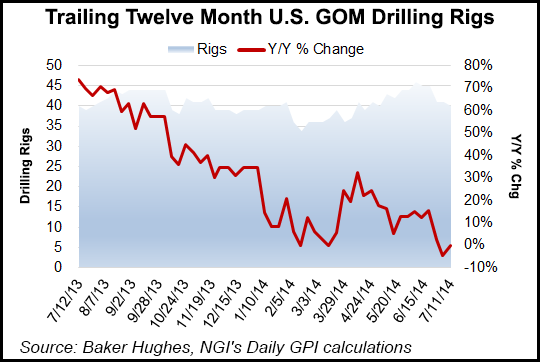 The Rydberg exploration well is in 7,479 feet of water, 75 miles offshore in Mississippi Canyon Block 525. Shell drilled the well to a total depth of 26,371 feet and encountered more than 400 feet of net pay. It joins the Appomattox and Vicksburg discoveries, also in the Norphlet trend, bringing the total potential of Shell’s holdings in the field to more than 700 million boe.

Norphlet is a Jurassic-period formation that extends from the U.S. onshore in Alabama into the deepwater. The trend is considered overall to be a natural gas-heavy play.

“The Rydberg discovery builds upon our leadership position in the Eastern Gulf of Mexico, and its proximity to our other discoveries in the area make Rydberg particularly exciting,” said Shell Upstream Americas Director Marvin Odum. “These successes represent the emergence of another hub for Shell’s deepwater activities that should generate shareholder value.”

Shell is completing an evaluation of the Rydberg well results; management expects the resource base to be around 100 million boe.

The discovery is within 10 miles of the planned Appomattox development, discovered by Shell in 2010, which is in more than 7,000 feet of water in the Mississippi Canyon (see Daily GPI, April 29, 2011). Appomattox (Shell 80%, Nexen 20%), currently is in the development stage and is moving forward with engineering design for the floating production system, subsea infrastructure and wells.

Shell and Nexen plan to follow up the Rydberg discovery with an exploratory well at Gettysburg in Desoto Canyon Block 398, also about 10 miles of the planned Appomattox development. The drillship Noble Globetrotter I drilled the Rydberg well and is repositioning to drill the Gettysburg exploratory well, Shell said.

The GOM accounts for almost half of Shell’s production in the United States, with output of about 180,000 boe/d in 2013.

Overall industry activity in the U.S. GOM has been slowing in recent weeks. According to Baker Hughes Inc., the number of drilling rigs in the Gulf fell from a one-year high of 46 on June 6 to 40 on July 11, the same number of rigs working the GOM one year ago. Moreover, the year-over-year change in GOM rigs has fallen steadily over the last year, dropping from 74% as of July 12, 2013, to 0% this past week.