Royal Dutch Shell plc expects to write down between $3.5 billion to $4.5 billion during the fourth quarter because of impairments, asset restructuring and onerous contracts. It would be the third time this year the Anglo-Dutch supermajor has written down assets. 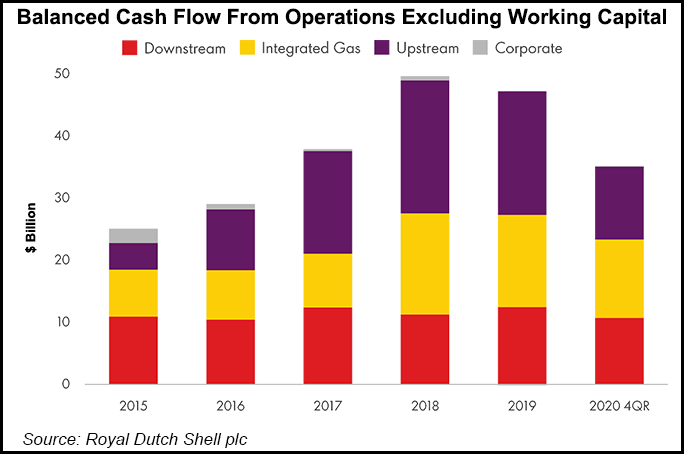 In a fourth quarter update, Shell said it expects to take a partial impairment on the Appomattox asset in the U.S. Gulf of Mexico (GOM) because of sub-surface updates. The project, located about 80 miles south of New Orleans, began production in May 2019. It was the first commercial discovery to ramp up in the Norphlet formation.

It also expects charges on oil products related to the previously announced transformation of the refinery portfolio, as well as on onerous contracts in the Integrated Gas (IG) segment.

Shell expects IG production to be between 900,000 and 940,000 boe/d in 4Q2020, which is above its previous forecast and higher than output of 820,000-860,000 boe/d in the third quarter. However, the company said the impact to earnings is likely to be “limited” because of its production sharing contracts.

Liquefaction volumes are expected to be between 8.0-8.6 million tons, while trading and optimization results are expected to be “below average” in the quarter, according to Shell. Around 80% of the company’s term LNG sales this year have been linked to oil prices, with a price lag of up to six months, management said. Shell is one of the world’s largest LNG traders.

The exploration and production giant said “significant margining outflows” have impacted cash flow from operations in the final three months of the year, and the full quarter impact is subject to commodity price changes and forward curves through Dec. 31.

In the upstream segment, Shell said production is forecast to be between 2.275 million and 2.350 million boe/d in 4Q, reflecting hurricane impacts in the GOM that totaled 60-70,000 boe/d and the effect of mild weather in Northern Europe in the first half of the quarter. Realized gas prices are expected to “trend in line with Henry Hub,” according to management.

In the Oil Products segment, Shell expects its refineries to run at a utilization rate between 72-76%, with realized gross refining margins projected to be slightly better than in 3Q. Marketing results are expected to be in line with the fourth quarter 2019 but significantly lower compared with 3Q results because of “lower volumes driven by seasonal trends.”

Shell in October slashed its workforce by up to 9,000 people, a reduction seen by management as simplifying the organizational structure and helping to deliver “sustainable” annual cost savings of $2-2.5 billion by 2022.

In a separate announcement, Shell said it has agreed to sell a minority stake in the Queensland Curtis LNG (QCLNG) common facilities to Global Infrastructure Partners Australia for $2.5 billion. The project includes LNG storage tanks, jetties and operations infrastructure that service the production units. Shell is to remain the majority owner and operate the facility.

Shell in 2Q2020 recorded one-time quarterly impairments totaling $16.4 billion because of withering energy demand and low prices, with charges for QCLNG and Prelude floating LNG in the Browse Basin. It followed that with another nearly $1 billion write-down in October, focused again on Prelude.