Royal Dutch Shell plc is simplifying its portfolio with an agreement to sell a minority interest in the Queensland Curtis liquefied natural gas (QCLNG) common facilities to Global Infrastructure Partners Australia for $2.5 billion. 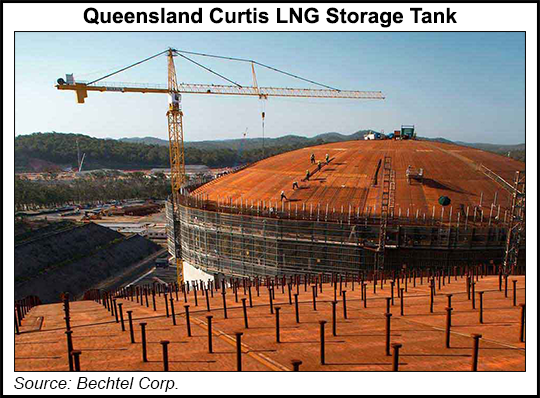 Shell subsidiary QGC Common Facilities Company Pty Ltd. is selling a 26.25% stake in the QCLNG facility, which includes LNG storage tanks, jetties and operations infrastructure that service the production trains. Shell would remain the majority owner and operate the facility. State-controlled China National Offshore Oil Corp. has a 50% equity in Train 1, and Tokyo Gas has a 2.5% equity in Train 2. Those equity stakes are to remain unchanged after the transaction, which is subject to regulatory approval in Australia and expected to complete in the first half of 2021.

“Due to the advantages it offers as a complement to renewable energy and as the cleanest burning hydrocarbon, natural gas is a core component of Shell’s strategy to provide more and cleaner energy solutions,” Shell said in a statement. “Global LNG demand is expected to outpace total demand for energy, and the QCLNG venture is crucial in helping Shell meet the world’s growing energy needs.”

Tudor, Pickering, Holt & Co. (TPH) said the transaction was rumored in the summer, with the sticker price aligning with prior expectations. Prior to the deal, TPH modeled the company achieving its $65 billion net debt target by the fourth quarter of 2021 based on strip pricing, with the sale opening up the potential for buybacks in the 4Q2021 timeframe should the macro environment continue to improve.

Shell reported one-time quarterly impairments of $16.4 million during the third quarter, with nearly half related to the fall-off in natural gas demand. The charges were for the QCLNG and  Prelude floating LNG in the Browse Basin.

Nevertheless, the Anglo-Dutch supermajor expects total exports to continue to grow, though likely less than the previous forecast of 5% a year. The company also owns the LNG Canada project underway on the northern coast of British Columbia.

Shell is aiming to raise $4 billion a year from asset sales. The sale to Global Infrastructure Partners puts it on target for this year, following the divestment of its Martinez refinery and Appalachia shale gas assets.