In the most ambitious makeover in its century-old history, Royal Dutch Shell plc is throttling back oil production as it inches toward a low-carbon future, but for natural gas, global opportunities abound. 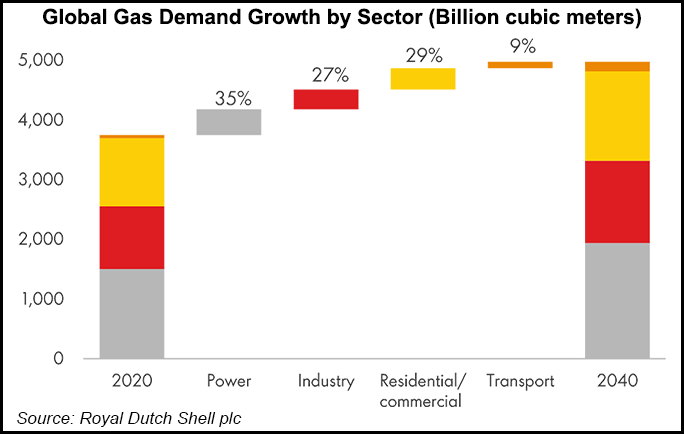 During wide-ranging presentations on Thursday for the energy major’s Strategy Day, the executive team etched out a roadmap to retool, designed to reach a destination with net-zero carbons by 2050.

On the long and twisted road ahead, Shell is taking natural gas with it.

The percentage of “total gas in our portfolio is expected to rise to around 55% or more” by the end of the decade, CEO Ben van Beurden told investors. However, “we do not anticipate any new frontier exploration entries after 2025.”

The CEO and his management team are clear eyed about the obstacles they face. Fossil fuels aren’t disappearing, but they will be slowly phased out. For now, though, those meaty oil and gas revenues will provide the glide path toward an alternative energy future.

“Even as the world decarbonizes, it will still need oil and gas for decades to come,” van Beurden told investors. “Our upstream business will provide that essential energy. And the cash we generate will fund our distributions to shareholders and help pay for the transformation of Shell.

“But our upstream pillar will become more focused, more resilient and more competitive.”

The upstream business has “nine core positions” that today generate more than 80% of total cash flow, “and they will attract around 80% of the upstream capital spending,” he said.

Meanwhile, liquefied natural gas (LNG) capacity is forecast to expand to 33.3 million metric tons/year (mmty), or by more than 20%, as the next decade unfolds. LNG export capacity by 2025 is projected to grow by 7 mmty as the LNG Canada project ramps in British Columbia, along with the seventh train at Nigeria’s Bonny liquefaction complex.

Another 3 mmty of gas demand is forecast as Shell captures new global markets by mid-decade, with cargoes set to sail into port in the Bahamas, Brazil, Indonesia, Pakistan and the Philippines.

The caveat is that only competitive LNG projects are set to move forward, with a technical cost of less than $5.00/MMBtu, in line with Shell’s average existing cost, which has fallen about 40% from $8.00 in 2015 to $4.80.

‘Change What We Sell’

To make “real progress” in the energy transition, “Shell must change what we sell,” van Beurden said. “We must sell a lower-carbon energy mix. Only this will reduce our carbon intensity over time….Getting to net zero by 2050 means cutting our carbon intensity by 100% and by achieving 45% by 2035.”

Shell plans to assist customers in reducing their facility emissions. “But by 2050, we will no longer serve customers who emit unmitigated carbon.”

“We will change,” van Beurden said. By 2030, “we could be delivering the equivalent of 50 million households with renewable electricity.”

The low-carbon businesses have been put under a new umbrella, Renewables and Energy Solutions, which includes power, hydrogen, nature-based solutions and carbon capture and storage (CCS).

Within four years, Shell is forecasting it would have an additional 25 mmt of CCS capacity and use “nature-based solutions” to offset by 2030 around 120 mmty.

Another priority longer term is to become an alternative energy provider, aka “power-as-a-service” for customers to “make net zero a simple and practical choice for the customer,” the CEO said.

“We believe there is more value to be had in designing the right products and solutions for customers than to just produce…green electricity.”

To that end, Shell plans to literally bring customers along for the ride. It is eyeing a massive expansion of electric vehicle (EV) charging points by 2025 to 500,000 from the current 60,000-plus in 14 countries.

Eventually, operations could climb to as many as 2.5 million EV charge points. It also wants to increase the amount of “low-carbon transport fuels like hydrogen and biofuels from 3% to about 10%,” van Beurden said.

In addition, it wants to amp up digital platforms to serve more than 15 million customers worldwide. The goal is to sell 560 TW/year, twice as much electricity as today.

To make it real for the workforce, “carbon budgets” will be set, enabling staff to find value growth by substituting “high-carbon income for low-carbon income,” van Beurden said. In addition, Shell is doubling the weighting of the “energy transition condition” in its long-term incentive share awards, which would impact more than 16,500 employees.

In the near term, the strategy is rebalancing the portfolio, investing $8 billion a year in the Upstream segment. Another $5-6 billion/year would be earmarked for the “growth pillar,” including $2-3 billion in Renewables and Energy Solutions. Another $8-9 billion/year would be targeted for the “transition” pillar, including $4 billion for Integrated Gas and $4-5 billion for Chemicals and Products.