Royal Dutch Shell plc saw better-than-expected profits in the first quarter as global demand for oil and natural gas soared along with prices. 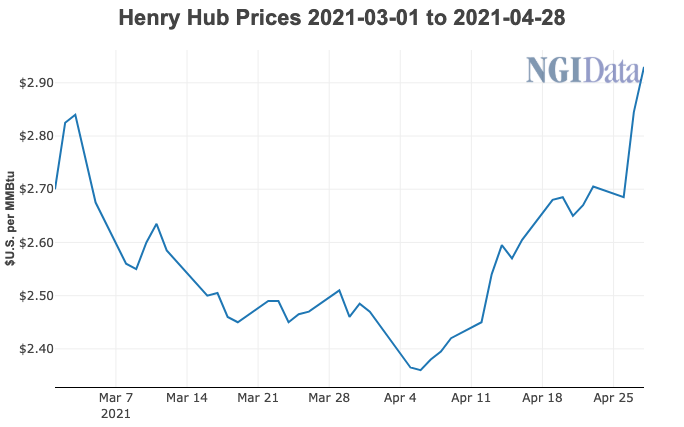 CEO Ben van Beurden during a conference call to discuss quarterly performance, said Shell was in a “pole position to benefit from the economic recovery” after posting the strong start for the year. He and CFO Jessical Uhl discussed results and the outlook ahead for the Anglo-Dutch supermajor.

“Our integrated business model is ideally positioned to benefit from recovering demand,” said the CEO.

That compares with fellow European major BP plc, which saw 1Q2021 profits triple on stronger fossil fuel demand. Total SE reported its earnings on Thursday, while ExxonMobil and Chevron Corp. are set to issue their results on Friday.

Within the Integrated Gas segment, average realized natural gas prices were $5.41/Mcf in 1Q2021, versus $4.33 in 4Q2020. Realized liquids prices climbed sequentially to $55.75/bbl from $37.68. Integrated Gas production rose 3% sequentially to 967,000 boe/d. The gains were attributed mostly to the restart of the Prelude floating natural gas project in Australia. Oil and gas production was 1% higher year/year.

Shell has indicated that oil production peaked in 2019, and should continue to fall by 1-2% a year to advance net-zero emission targets.

As management signaled earlier in April, global liquefied natural gas (LNG) sales volumes declined sequentially in 1Q2021. The decline came in part because 80% of last year’s term sales were oil-price linked, with a lag of up to six months.

Even though maintenance is cutting into volumes, Shell should “be able to have anywhere between $7 billion to $9 billion of capital through the cycle,” van Beurden told analysts. “We want to make sure that we are not under invested or over investing. We’re trying to be steady…and disciplined in the way we are allocating capital.

“What we tried to also indicate is that our value-over-volume strategy means that not every single barrel is equal. We want to try to focus on the most attractive barrels in our portfolio and you see us making the moves” via divestment to “focus our barrels on the ones that we feel are differentiated and our core positions.”

While not giving ground on working toward net-zero emissions, Shell also has no plans to give an inch as the world’s leading LNG trader. Plans are to bring more than 7 million metric tons/year (mmty) of new capacity onstream by the middle of the decade. In addition, the integrated energy major expects to capture more than 20% market share in LNG bunkering sales by 2030.

The LNG business is in growth mode all the way, with plans to grow its market footprint “by creating new markets and embracing new customers,” management said. Selective investments are planned “in competitive LNG assets.”

In addition, Shell is building a “material” LNG business for the global transport sector. During 1Q2021 it took delivery of the first European carbon-neutral cargo at the Dragon LNG terminal in Wales.

Shell also agreed in the first quarter to charter 10 crude tankers powered by dual-fuel LNG engines. Half of the long-term tankers are scheduled to run on LNG beginning in 2023.

Even with plans to boost LNG capacity and market share in the coming years, operational expenditures in the Integrated Gas segment are set to decline by 20% in 2022 versus 2019 spending.

Net debt declined by more than $4 billion in 1Q2021 to $71.3 billion, putting Shell on course toward hitting its $65 billion target.

“Once this milestone is achieved, we target to increase shareholder distributions to 20-30% of our cash flow from operations,” van Beurden said.