Royal Dutch Shell plc CEO Ben van Beurden, who promised three years ago that the company would hit its targets after the biggest-ever acquisition of BG Group plc, is close to delivering on every metric, after eye-popping results during the fourth quarter. 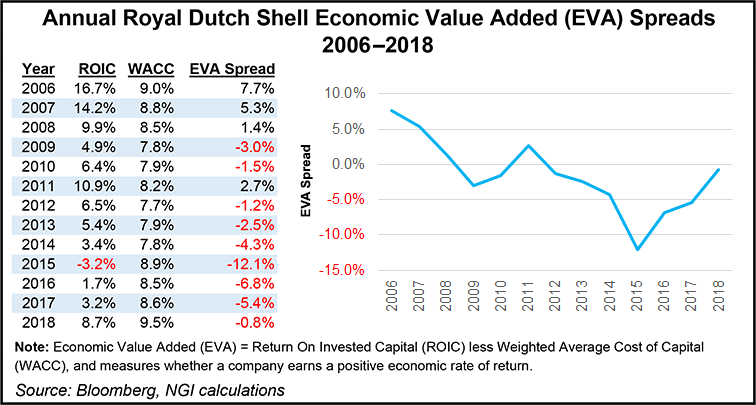 The Anglo-Dutch supermajor generated more cash at lower oil prices and still kept spending under control in the final quarter, while debt fell to its lowest level since the estimated $50 billion-plus purchase of liquefied natural gas (LNG) powerhouse BG.

The strong results set a high bar for U.S. rivals ExxonMobil Corp. and Chevron Corp., which are scheduled to issue their reports on Friday.

“We delivered on our promises for the year, including the completion of the $30 billion divestment program and starting up key growth projects, while maintaining discipline on capital investment,” van Beurden said. “We will continue with a strong delivery focus in 2019, with a disciplined approach to capital investment and growing both our cash flow and returns.”

CFO Jessica Uhl pledged that Shell could “do it all” with crude oil at $60/bbl. Brent, the international benchmark, was trading at around $62 early Thursday, while West Texas Intermediate was above $55.

Worldwide, gas and oil production was nearly flat year/year during 4Q2018, only up 1% to almost 3.7 million boe/d. However, van Beurden said new projects are set to deliver 150,000 boe/d of new output this year, “more than enough” to offset declines.

The theme of value over volumes was a consistent mantra of the day. Shell replaced about half of the 1.5 billion boe in reserves it produced during 2018, but Ulh said more cash is being squeezed from each barrel.

“What we want is to grow our company,” Uhl said. “That may or may not correlate with reserves…We have confidence in our ability to continue to grow cash flow.”

Some of Shell’s top projects in the United States for 2019 and 2020 are led by developments and discoveries in the deepwater Gulf of Mexico (GOM), where the supermajor is one of the leading leaseholders and producers.

The Appomattox floating facility, sanctioned in 2015, “will be a key asset…We expect some 175,000 boe/d from the Norphlet field when operating at peak production levels,” van Beurden said. Appomattox initially would produce from the Appomattox and Vicksburg fields, which are about 80 miles offshore Louisiana in 7,200 feet (2,195 meters) of water. The project is owned by Shell (79%) and CNOOC Ltd.’s Nexen Petroleum Offshore U.S.A. Inc. (21%).

Appomattox, which could ramp this year, ahead of a 2020 schedule, “will bring a stepchange to our cash flows, with high margin barrels delivering cash for Shell for years to come,” the CEO said. “The teams are now working to commission and safely bring Appomattox onstream later this year.”

Also on the fast track for development is last year’s Whale discovery in the Alaminos Canyon of the GOM, considered one of the largest discoveries in a decade.

“When we announced the Whale discovery last year, I said we were looking to accelerate the development cycle and bring the project onstream faster,” van Beurden said. “We are already assessing the results of the exploration and appraisal wells that we have drilled at Whale. In parallel, we are assessing development options and at the heart of these discussions, is standardization, replication and incorporating the learnings…And this should allow us to accelerate timelines, and depending on the outcomes of course, we could take a final investment decision as early as next year.”

Shell also is looking at ways to use efficiencies learned to improve capacity in fields already discovered and for future exploration. High on the list is Permian Basin development, where the company has dedicated more than half of its capital.

The Permian acreage today produces about 145,000 boe/d, a 200% increase since January 2017, van Beurden told analysts. “You have seen a 200% increase since January 2017…We’ve also matured the inventory of resources in excess of a 1 billion boe in the Permian in forward-looking breakeven prices of less than $40/bbl. So we expect to deliver continued growth through 2020.”

In the downstream U.S. business, Shell’s “Pennsylvania Petrochemicals Complex is under construction at the moment and is expected to deliver commercial production early

in the next decade,” he said. The project is expected to produce 1.6 million metric tons of polyethylene a year.

“Our project funnel is strong, and we have options across all of our strategic themes to support the company’s cash generation far into the future.”

On the gas front, Shell’s majority owned (67.5%) Prelude floating LNG facility (FLNG) in Australia, considered the world’s largest FLNG, opened some wells in December. During the initial phase, gas and condensate are to be produced and moved through the facility, and once concluded, the facility should be prepared to produce LNG and liquefied petroleum gas (LPG). The facility, 124 miles offshore Australia, is expected to produce 3.6 million metric tons/year (mmty) of LNG, 1.3 mmty of condensate and 0.4 mmty of LPG.

The Integrated Gas business, which houses the LNG and liquids trading, saw profits soar 322% in 4Q2018 to $3.6 billion. Cash flow from operating activities increased 603% to $5.8 billion.

Shell distributed $3.9 billion in total dividends during 4Q2018. In January, the second tranche of the share buyback program was completed worth $2.5 billion, and another buyback was launched on Thursday (Jan. 31) to buy up to $2.5 billion through April 29.