Subsea wells have been opened at the Prelude floating liquefied natural gas (FLNG) facility in the Browse Basin off the northwest coast of Western Australia, according to Royal Dutch Shell plc. 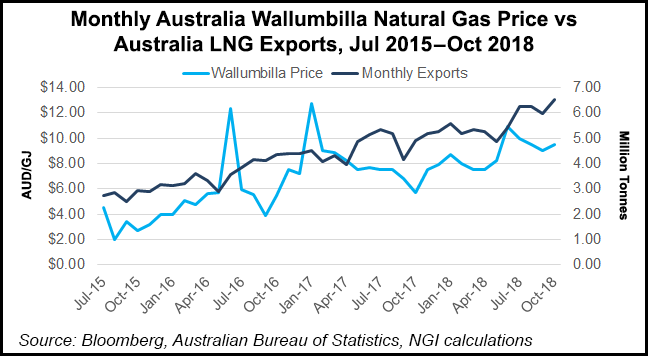 “Prelude now enters start-up, ramp-up, which is the initial phase of production where gas and condensate is produced and moved through the facility,” the supermajor said. “Once this has concluded, the facility will be stabilized for reliable production of LPG [liquefied petroleum gas] and LNG.”

Shell first announced plans for the FLNG facility in 2009 and committed to it less than two years later. Ocean-going LNG carriers will offload LNG and other products directly from the facility for delivery to markets worldwide.

Output from Prelude is expected to go to thirsty Asian markets, along with production at the Shell-operated Queensland Curtis LNG and Chevron’s twin LNG export projects in Australia, Wheatstone and Gorgon.

Uncontracted demand by the world’s seven largest LNG buyers — all based in the Asia Pacific — may quadruple to 80 million metric tons/year (mmty) by 2030, according to a recent analysis by Wood Mackenzie. The seven buyers, which together account for more than half of the global gas export market, are China National Offshore Oil Corp., aka CNOOC, CPC Corp., Japan’s JERA Corp. Inc., Kogas, PetroChina Co. Ltd., China Petroleum & Chemical Corp., aka Sinopec, and Tokyo Gas Co. Ltd.