A unit of Royal Dutch Shell plc on Tuesday gave the green light to its first new development in the Gulf of Mexico (GOM) in 18 months, the Kaikias deepwater field about 130 miles offshore Louisiana, after slashing costs by more than half. 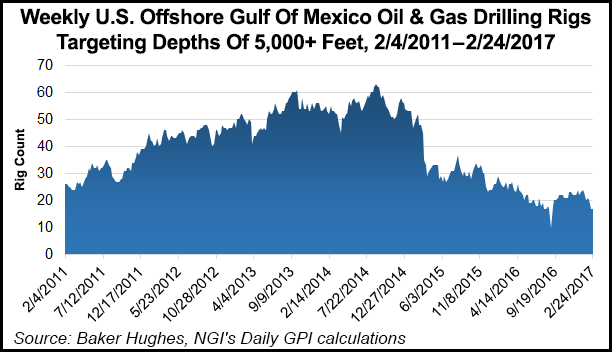 The Kaikias field in Mississippi Canyon (blocks 811 and 812) was unveiled by Shell in 2014, and initial projections issued one year later estimated the field held more than 100 million boe of recoverable resource. It is the first GOM project to advance since a final investment decision was made for Appomattox in 2015.

After simplifying the design, Shell expects to ramp up production in 2019, generating profits at oil prices under $40/bbl. Shell minimized the need for new drilling at Kaikias by redeveloping the exploration and appraisal wells for production. By taking advantage of existing oil and gas processing equipment on its operated Ursa platform, Shell also reduced the need for additional topside modifications and plans to cut operating costs at the asset.

“Kaikias is an example of a competitive and capital-efficient deep-water project using infrastructure already in place,” upstream chief Andy Brown said. “The team has done a great job to reduce the total cost by around 50% by simplifying the design and using lessons learned from previous subsea developments.”

Kaikias was the longest well ever drilled by Shell at 34,500 feet measured depth in 4,575 feet of water. As designed, the field will produce oil and natural gas via a subsea tieback to Ursa. The Mars-Ursa Basin, is one of Shell’s most prolific offshore areas, and it now owns and operates three infrastructure hots there: Mars, Mars B and Ursa. Combined output pre-Kaikias is about 500,000 boe/d.

Considered part of Shell’s “heartlands exploration program,” Kaikias wouldn’t compete with the Mars or Ursa hosts, but the field could extend and expand them. The field is to be developed in two phases, initially producing in 2019 using three wells and a single flowline. Each well would be designed to produce at peak up to 40,000 boe/d.

Theglobal deepwater business today is the No. 1 growth priority for Shell. During 4Q2016, about 725,000 boe/d from deepwater alone, and output is projected to increase to more than 900,000 boe/d by 2020 from already discovered, established reservoirs. Two other Shell-operated projects — Coulomb 2 and Appomattox –are under construction or undergoing pre-production commissioning.