Royal Dutch Shell plc saw its fourth quarter results halved from a year ago in part on a huge U.S. onshore natural gas price-related writedown, and more rough patches likely are ahead, but the global natural gas trading arm is on track to rise above the mayhem, the CEO said Thursday. 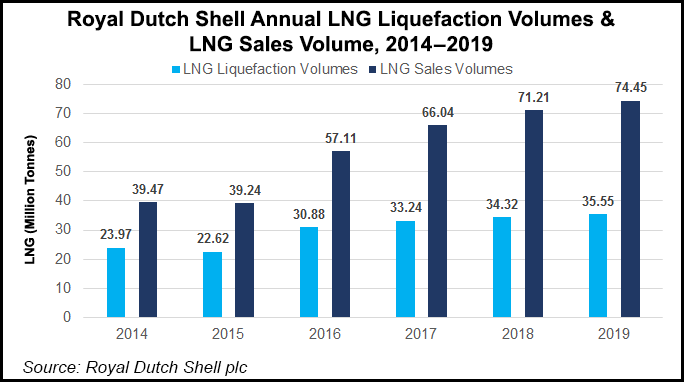 Shell chief Ben van Beurden was joined by CFO Jessical Uhl to discuss quarterly and year-end results for the Anglo-Dutch major. Shell had warned in December of impairments because of gas price headwinds; the actual impairment in 4Q2019 was $2.24 billion. Shell also took a $1.93 billion charge for the year, “primarily in unconventional gas assets in the U.S. and a drilling rig joint venture.”

During the conference call, van Beurden signaled concerns about the state of gas and oil markets, which along with low commodity prices now face questions about demand in China, the site of the coronavirus outbreak. Still, he pointed to a solid future for liquefied natural gas (LNG) even on dismal pricing.

“Our LNG business with trading, marketing and optimization goes from strength to strength,” van Beurden said.

Fourth quarter performance from the LNG trading unit was “one of the strongest years in recent memory,” Uhl said. The performance in the Integrated Gas unit helped to offset lower commodity prices, as well as decreased refining and chemical margins.

LNG sales volumes within the Integrated Gas segment climbed 16% year/year to 20.09 million metric tons (mmt) and were up from 18.09 mmt in 3Q2019. Liquefaction volumes rose 5% to 9.21 mmt, boosted by additional capacity from the Elba Island export project in Georgia and the Prelude floating production facility in Australia.

Higher LNG volumes are expected to remain solid again in the first quarter, now estimated at 9-9.5 mmt. Investing in global gas remains a priority over the next 10 years.

Even with low spot gas prices, which recently fell to their lowest level in more than 10 years, Shell was able to create value despite the “very difficult” macro environment,” Uhl said.

On LNG, “we have a long-term view…We continue to believe in the fundamentals of the industry in terms of its contribution to a lower-carbon future.”

Gas is “critical” to the energy transition over the long haul, she said. “We believe in the fundamentals of its role in energy, and demand and these things will work themselves out in time.”

Integrated Gas earnings were hit by lower realized LNG, oil and gas prices, as well as higher operating expenses and depreciation, but the upside was the stronger contribution from gas and power trading, as well as optimization.

While the gas trading was a bright spot in the earnings results, quarterly profits from current cost of supplies (CCS), similar to U.S. net earnings, fell sharply year/year to $871 million from $7.33 billion. Revenue plunged 18% to $84 billion. Cash flow from operating activities stumbled in 4Q2019, down by 40% year/year to $3.457 billion.

Compared with 4Q2018, total production “remained largely unchanged” because field ramp ups in the Permian Basin, Gulf of Mexico and Santos Basin, “offset by the impact of divestments and field decline.”

About half of the planned $10 billion in asset sales expected through year’s end are completed, but more assets now are on the line, van Beurden said.

“How that pans out depends a little bit on the pace at which we can close deals, and we will be driven by an economic rationale, rather than a desire to have early cash.”

Shell, which began a $25 billion share buyback program in July 2018 has since bought $15 billion. However, the iffy economic outlook has led management to cut back for now, putting the goal to buy back $25 billion by year’s end in doubt.

“All macroeconomic indicators are working against us,” van Beurden said.

The gearing level, a European financial metric that measures net debt as a percentage of total capital, climbed to 29% in 4Q2019, above the 25% target and 1% higher than in 3Q2019. Credit rating firms assess the risks a company faces using gearing as one measure; levels below 25% are considered lower risks.

Van Beurden said the strength of the company’s portfolio enabled it to deliver a competitive performance “despite challenging macroeconomic conditions in refining and chemicals, as well as lower oil and gas prices…”

There are some things about which most companies have no control. During an interview on CNBC Thursday to share quarterly results, van Beurden pointed to the impact the coronavirus outbreak in China is having. The virus first was discovered in Wuhan and has since spread to major metropolitan areas, including Beijing and Shanghai, as well as overseas including to cases confirmed in the United States and Europe.

“The coronavirus, I’m sure, will keep a lot of people on edge, and rightly so,” the CEO said on CNBC’s Squawk Box Europe. “It is a very concerning development, a lot of people will be anxious, and of course we are monitoring very closely what is happening.”
Van Beurden said he was “absolutely convinced” that concerns about the virus “will not help sentiment…At this point in time, sentiment in oil markets is not so much sentiment about supply, it is all sentiment in demand…

“I think we have to prepare for a tough and uncertain macro. We do that in our company by making sure that our investments are resilient…I think that’s the best way to inoculate ourselves against an uncertain future.”

Questions swirl also around the Nord Stream 2 gas pipeline, which would move supply from Russia to Germany. The United States has issued sanctions and threatened to penalize any company assisting in laying pipeline.

Shell provided financing for Nord Stream, but it is not a direct investor, van Beurden said. “As a result of that, the pipeline not being completed means it will not be able to generate cash flows that were meant to service the debt…There will be some challenges on how that project goes forward.”

Meanwhile, van Beurden wants “desperately” for Shell to direct more funding to the New Energies arm but for now the watchwords revolve around disciplined spending. The New Energies arm is centered around technology efficiencies and renewable efforts in electricity supply and generation, electric vehicle charging and alternative fuels.

Shell has invested around $2.3 billion in the segment, even though it had pledged to more than double that amount.

“We are not spending enough on New Energies, especially in power, and we want to ramp that up,” the CEO said. “To transform our portfolio we have to progressively spend more.” Spending is expected to be $1-1.5 billion in the near term.