Royal Dutch Shell plc has reduced its 2016 capital spending by another 10% and warned Wednesday that low natural gas and oil prices are continuing to weigh on executing expansion plans in North America. 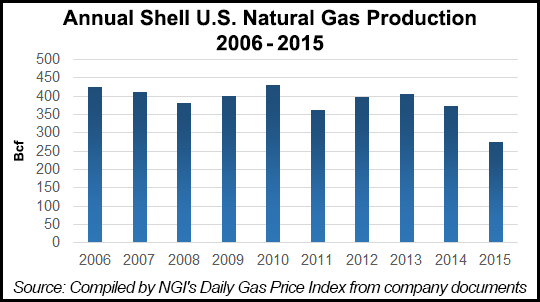 In the first results posted since completing its merger in February with BG Group plc, Shell reported that its current cost of supplies, similar to U.S. net income, fell year/year by 58% to $1.55 billion from $3.77 billion. The refining business was up 22% while the chemicals unit posted a 107% increase in profits. However, the upstream business posted a loss of $1.44 billion, down 22% from a year ago.

Low commodity prices are hindering global growth in the near- to medium-term, CFO Simon Henry said during a conference call. Asked specifically about progress on projects in North America, including the potential petrochemical plant in Pennsylvania, he hedged.

Final investment decisions (FID) now are scheduled for an up or down vote in the offshore and onshore, all of which are “hard choices,” Henry told analysts.

“There are three or four big projects,” awaiting FIDs in the North American queue, and the “first on the list is in fact the…chemicals plant in Pennsylvania,” where Shell has an option for a building site in the western part of the state (see Shale Daily, March 6). It also faces decisions on whether to move forward with liquefied natural gas export developments in Lake Charles, LA, and British Columbia. Also on the list is the deepwater Gulf of Mexico’s Vito development.

“Further, there’s four big greenfield projects, over which we could take a final investment decision in…less than 12 months,” Henry said. It’s “highly unlikely” every project will get a green light, and possibly “only one” that would actually move ahead within a year’s time.

“Basically it’s a choice of…what’s the best way of retaining or maximizing value from that set of opportunities?” The Pennsylvania project needs a decision one way or another soon, “because of the timing of certain commitments that are already in place. It’s an excellent project. It’s got a diverse set of market exposures and risks associated with it, and therefore, provides quite some portfolio resilience relative to the rest of the opportunities, not just the big ones, but the smaller ones as well.”

Management has had “a lot of discussion” about the Pennsylvania proposal, but it has not yet pulled “the trigger on it one way or the other. And there’s not a free option, of course. There are costs of keeping the option open, so there’s not a decision yet, but it actually is looking” as if it could move forward.

“If it were not a $40 world, it would probably be a very easy decision. It’s a very strong and robust project.”

Shell’s North American unconventionals business has been in a bit of disarray for months. Last November it said it would create a separate Lower 48 arm but in February that plan was tossed and rolled back into the upstream operations (see Daily GPI, Feb. 24). Henry was asked if the scheme would be similar to ExxonMobil Corp.’s XTO Energy Inc. subsidiary or more like BP plc, which has created an independent U.S arm.

“On the Lower 48, there certainly are two models out there, sort of the reverse integrations into an XTO-type model or the BP internally that could be conceived in practice,” he said. “The team running the onshore shale business today…has taken huge amounts of costs,” which is the biggest step in the near-term.

“What I would like to think is, if lower levels of above-asset cost is feasible for the shale business, then it should be feasible everywhere else in shale.” The U.S. arm is being used as a “pilot to identify where we can go further faster elsewhere…”

The unconventionals business in North America and Argentina combined are to receive about $2 billion for capital expenses this year, well below previous years, but Shell is “getting a lot more for it, as it happens, because they keep coming in ahead of target. About 70% of the wells are coming in with 1,000 boe/d initial production or better. And we’re seeing costs continue to be down,” by 20-30% year/year.

However, most of the unconventional work remains in exploration and appraisal, not development.

“We rarely, if at all, pull the trigger on major developments for obvious reasons, and $2 gas and $34 oil is not the time to be doing major development. So it’s a bit in a holding pattern. Strategically we’re in a good place with what we’ve got now, in terms of resource potential,” with an estimated 12 billion boe across Canada, the United States and Argentina.

“Around three-quarters or 70% or so of that is gas,” Henry said. “I think over time this is going to be great value to develop,” but in the near- to medium-term, Shell plans to maintain current capital allocation.

Although commodity prices have somewhat recovered in the past few weeks, “it is far too soon to be calling a break in the weaker environment,” Henry said. “In very simple terms, we’re taking costs out of projects, and projects out of the funnel.”

Earlier this year Shell set its 2016 capital expenditure guidance at $33 billion but spending today “is clearly trending toward $30 billion,” Henry said. At $30 billion, total spend would be 35% below 2014 levels, when combining Shell and BG’s 2014 capital budgets of $47 billion.

Shell plans to reduce its workforce by another 2,800 with the BG combination, which is on top of the 7,500 planned reductions. Voluntary “redundancy packages’ have been offered to some staff.