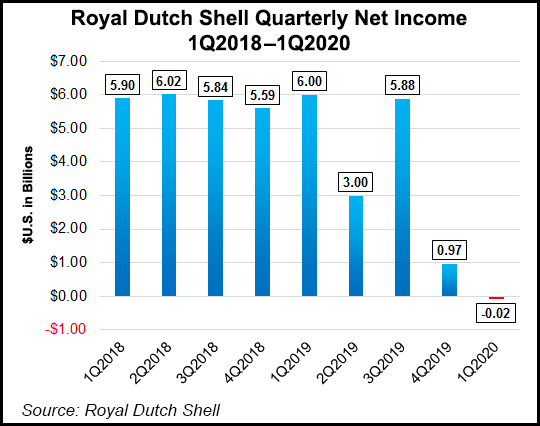 Royal Dutch Shell plc expects to impair up to $22 billion in the value of its global natural gas and oil assets for the second quarter, citing the challenges from Covid-19 that have slammed commodity prices and energy demand.

The supermajor said it was adapting “to ensure the business remains resilient.” A revised forecast for long-term gas and oil prices resulted in aggregate impairments of $15-22 billion post-tax.

The mid- and long-term price and refining margin outlook has been revised to reflect the “expected effects of the Covid-19 pandemic and related macroeconomic as well as energy market demand and supply fundamentals.”

The one-time writedowns are seen impacting a “significant portion” of the Upstream, Integrated Gas and Refining assets.

Around $4-6 billion is set to be impaired within the North American unconventional and Brazil projects. In the Integrated Gas segment, $8-9 billion of assets are likely to face one-time writedowns, primarily in Australia, including the Queensland project on Curtis Island and the Prelude floating liquefied natural gas (LNG) project in the Browse Basin.

In addition, a writedown of $3-7 billion is expected “across the refining portfolio.” The pre-tax impairment overall is estimated at $20-27 billion. Additional well write-offs are likely to be $250-350 million versus 2Q2019, with no cash impact expected in 2Q2020.

Management said “the range and timing of the recognition of impairments in the second quarter are uncertain and assessments are currently ongoing. The revised outlook for commodity prices and refining margins could impact overall deferred tax positions, which will be reviewed after the finalization of the operating plan later in 2020.”

“Trading and optimization results are expected to be below average,” Shell noted. “As previously communicated, more than 90% of our term contracts for LNG sales in 2019 were oil-price linked with a price lag of typically three-to-six months. Consequently, the impact of lower oil prices on LNG margins became more prominent from June onwards.”

Cash flow from operations in the Integrated Gas segment “can be impacted by margining resulting from movements in the forward commodity curves,” Shell said. “Margining inflows are not expected to be significantly different from those received in the first quarter 2020.”

“Although this production range is higher compared with the outlook previously provided, it has had a limited impact on earnings in the current macro environment,” Shell noted.

Refinery utilization in the Oil Products segment is estimated at 67-71% for the second quarter. Realized gross refining margins “are expected to be significantly lower compared with the first quarter 2020 and are expected to be offset by higher trading and optimization results,” Shell said.

Oil Products sales volumes in 2Q2020 are expected to be 3.5-4.5 million b/d, “driven by a significant drop in demand related to the impact of Covid-19.”

“The Upstream and Integrated Gas asset valuation updates, including related exploration and evaluation assets, are largely driven by the change in long-term prices with some impacts due to a changed view on the development attractiveness.”
In addition, a revision in the decommissioning and restoration provision discount rate assumption to 1.75% from 3% reflects “a lower interest rate environment,” which has impacted the asset values tested for impairment.

In Shell’s Chemicals segment, manufacturing plant utilization is expected to be 75-79% in 2Q2020, with sales volumes of 3.4-3.7 million metric tons.

Meanwhile, gearing is expected to increase up to 3% because of the impairments, Shell noted. Gearing, which measures a company’s financial leverage, is the extent to which operations are funded by lenders versus shareholders. When the proportion of debt-to-equity is high, a company is considered to be highly leveraged.

“Additional impacts to reported gearing levels are expected due to pensions revaluations associated with the current interest rate environment along with other usual quarterly movements,” Shell noted.

Second quarter results are scheduled to be issued on July 30.

Wood Mackenzie expects more operators to impair assets because of Covid-19. BP plc signaled earlier in June that it plans to impair $13-17.5 billion in 2Q2020 on the “enduring impact” of the pandemic.

“The major oil companies are going through a process of reassessing long-term oil price assumptions and investment hurdle rates as a result of the oil price crash and the coronavirus,” said Wood Mackenzie’s Angus Rodger, director of the upstream research team. “BP and Shell are just two of the companies that have announced recent changes.

“Cutting long-term price assumptions will generally result in a lower valuation, for certain assets to below the accounting value held on the balance sheet. That’s what will trigger an impairment charge. This process has further to run, and we expect further large impairments to occur across the sector.”

The price crash and pandemic already have wiped an estimated $1.6 trillion off Wood Mackenzie’s valuation of the global upstream sector, he noted.

Wood Mackenzie’s Luke Parker, vice president of corporate analysis, said Shell’s impairment “is about more than an accounting technicality or an adjustment to near-term price assumptions. It’s about fundamental change hitting the entire oil and gas sector. Within this writedown, Shell is giving us a message about stranded assets, just like BP did a few weeks ago.”
It’s part of a wider trend, Parker said.

“Just a few years ago, few within the oil and gas industry would even countenance ideas of climate risk, peak demand, stranded assets, liquidation business models and so on. Today, companies are building strategies around these ideas. Demand might still grow from here, and many companies are still chasing a share of that growth. But make no mistake, the corporate landscape is changing, and the majors are changing with it.”