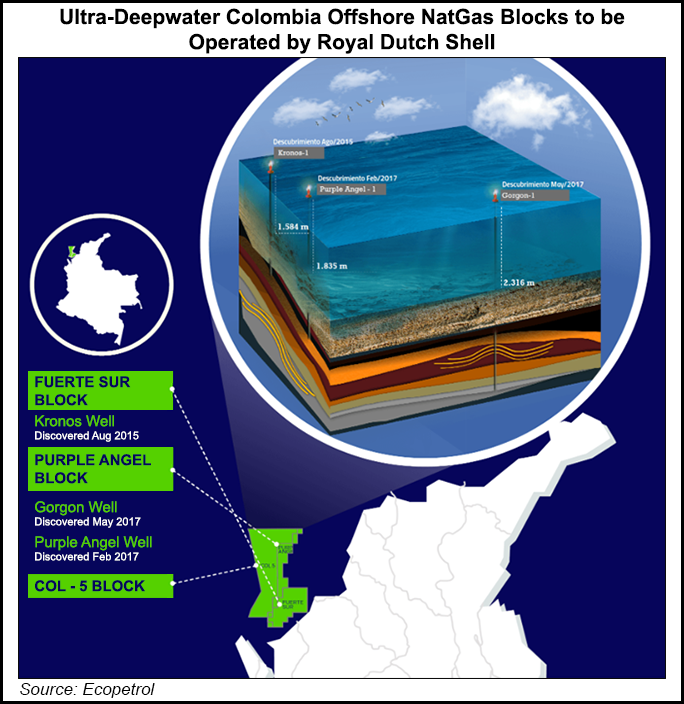 “Following this commercial agreement, which includes the financing of Ecopetrol’s investments by Shell, the latter will assume the operation of the blocks, the drilling of an appraisal well in the area by the end of 2021 and the completion of the first production test, once the approvals from the authorities are received,” the companies said. “If these activities provide positive results, the discoveries could be further developed and consequently, expand the country’s gas supply in the medium term, potentially exceeding 3 Tcf according to Ecopetrol’s estimations.”

Citing Shell’s experience in ultra-deepwater projects, and in the development and commercialization of “large impact gas projects,” Ecopetrol CEO Felipe Bayón said the alliance “will allow us to verify the production capacity of these reservoirs and their possible future development.”

The two firms already have partnered in deepwater projects in Brazil’s pre-salt and the U.S. Gulf of Mexico.

The agreement “is a significant step for Shell in Colombia and in South America,” said Shell’s Ana María Duque, who heads the major’s operations in Colombia.

“We have collaborated with Ecopetrol on multiple opportunities since its creation, and we are very content to continue demonstrating our commitment of more than 84 years to Colombia and its energy resources.”

Ecopetrol had been seeking to award an operating stake in the blocks since 2019, when former operator Anadarko Petroleum Corp. exited Colombia. Anadarko has since been acquired by Occidental Petroleum Corp.

In 2019, Ecopetrol and Occidental announced an onshore joint venture in the Permian Basin’s Midland formation.