Royal Dutch Shell plc, whose profits fell 37% in the second quarter, plans to cut 7% of its workforce — an estimated 6,500 jobs — and is reducing capital spending across the board as it reacts to what may be a prolonged period of low natural gas and oil prices. 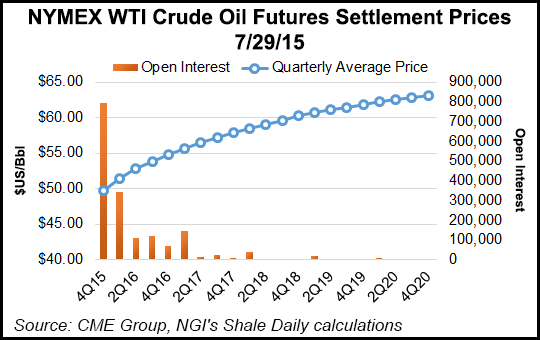 The European major saw its upstream profits tumble 80% year/year, and it has put an austerity plan in place to sell about $50 billion of assets between 2014 and 2018 and it defers, revamps and cancels projects worldwide. Prices may not recover for years, CEO Ben van Beurden said during a webcast from London.

With that in mind, he attempted on Thursday to sell the idea that the proposed $70 billion takeover of European rival BG Group plc actually would make Shell leaner and more efficient (see Daily GPI, June 17; April 8). The transaction remains on track to close early next year.

“Perhaps we left the impression that we will wait for the cavalry to arrive in the form of higher oil prices and that we were going to be lazy in terms of cost takeout,” van Beurden said. But at the time of the BG announcement, “perhaps not skillfully enough and not loud enough, is judge us on what we do and that is what today’s message is all about.”

Shell has to be “resilient in a world where oil prices remain low for some time, whilst keeping an eye on recovery. These are challenging times for the industry, and we are responding with urgency and determination.”

Analysts reminded van Beurden that he had sold the BG deal on an expected oil price recovery. Management had confidence in April that oil prices would return to $90/bbl in three years (see Daily GPI, April 30). The CEO sought to dispel the concerns about BG, emphasizing that the takeover would make sense at “nearly any oil price we can envisage.”

Still, the CEO warned that “today’s oil price downturn could last for several years.” Longer term, with BG part of the mix, Shell is going to have more efficient operations, with “reduced exploration spend, a fresh look at capital allocation in longer term plays, and asset sales spanning upstream and downstream…In essence, we grow to simplify.”

Van Beurden didn’t detail what projects could be axed from the portfolio, but only two final investment decisions are planned this year, with the $20 billion Appomattox development in the deepwater Gulf of Mexico (GOM) making the cut (see Daily GPI, July 1). The platform would be Shell’s seventh four-column host in the GOM, initially producing from the Appomattox and Vicksburg fields, with average peak output estimated to reach 175,000 boe/d.

There was little talk about what’s going to happen in North America’s onshore, where Shell has suffered impairments for the past few years, long before the oil market declined. More asset sales are possible, but few details were offered. One analyst questioned why Shell wouldn’t sell its Permian Basin holdings, since it’s not doing much development there, unlike other operators.

“Could we sell it? Sure, we could,” Henry said. “Would we sell it? I’m not sure why we would” as it would signal a “de facto exit from unconventional activity.” The Permian holds a “longer term competitive advantage” that Shell can keep “in its back pocket.” For Shell, the play “is still relatively immature. It’s not good at the moment, but we don’t have to sell, so there’s no reason to do so unless somebody puts so much money on the table that we’d be a fool to walk away.”

Shell’s Permian and the Duvernay Shale, another liquids play in Canada, “both look pretty good, it’s just a question of when and how they can be turned into money.” North American gas assets also are “good, it just doesn’t make a lot of sense investing at $2.80.”

The drastic spending cuts and job losses may not be the last if economic conditions continue to deteriorate, van Beurden warned. This year’s capital expenditures (capex) have been reduced by $3 billion, or 10%, from initial guidance. Capex in 2Q2015 was $7.1 billion, with $5.9 billion directed to upstream activities, while in 2Q2014, Shell spent $8.5 billion, with $7.1 billion for upstream. Pro forma capex in 2016, which would include BG, now is set at $35 billion, down from an earlier estimate by about $7 billion.

Global natural gas realizations were 31% lower than for the same period a year ago, with a 53% decrease in the Americas and a 24% decrease elsewhere. Global liquids realizations fell 43% year/year.

Production in the latest period totaled 2.73 million boe/d, 11% lower than a year ago. Natural gas output fell 17% from a year ago while liquids output declined by 4%. Excluding divestments and other items, production declined 3% year/year. LNG equity sales slumped 9% to 5.46 million metric tons.

Second quarter cost of supplies, similar to U.S. net profit accounting, fell 35% year/year to $3.84 billion (61 cents/share) from $6.1 billion (97 cents), excluding one-time items. Revenues again were offset by the downstream arm, where earnings more than doubled from a year ago.

Upstream profits fell sharply from a year ago to $1.037 billion from $4.722 billion. In addition to impacts from the significant decline in oil and gas prices, earnings also were reduced because of several factors, including lower volumes driven by planned maintenance at the Pearl gas-to-liquids complex in Qatar, heavy oil in Canada and deepwater in the GOM.

Tudor, Pickering, Holt & Co. said Shell’s decision to aggressively reduce its business in light of a “lower-for-longer oil price environment…This should be well received as Shell has suffered from a perception that its capital discipline has been poor relative to peers and that the BG deal was struck assuming higher oil prices, while synergies were limited.”

Jefferies LLC analysts said Shell “mishandled” the original announcement to investors about the benefits of the BG transaction, reflected in the share price, which has fallen about 17% since the announcement. With the additional insight into the combination, focused on efficiencies, executives offered “a good rebranding” of the message, Jefferies analysts said. Sanford C. Bernstein analyst Oswald Clint added that the planned spending cuts are “the cherry on the cake.”