Royal Dutch Shell plc, the undisputed global leader of natural gas trading, reported a shortfall in sales and volumes during the second quarter, but many maintenance-related issues are expected to be resolved within weeks. 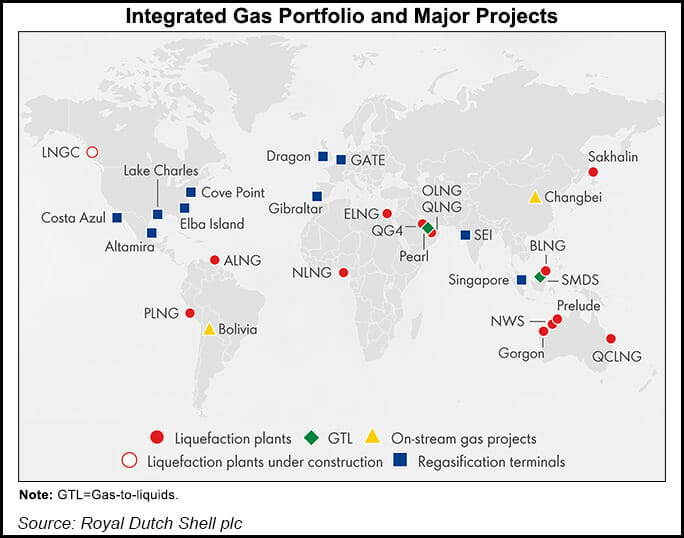 Shell’s Integrated Gas business, which includes the estimable liquefied natural gas (LNG) arm, long has been a standout performer. However, in recent quarters activity has slowed. Compared to some of the strong quarters in 2019 and 2020, it was a “soft quarter,” even with strong gas prices, CFO Jessica Uhl said.

A confluence of things in 2019 and 2020 had allowed Shell to experience “some pretty extraordinary external market events,” Uhl said. That allowed the Integrated Gas unit to gain an advantage.

“We shouldn’t consider that kind of normal course of business,” Uhl said. While there were some “unusually good quarters in 2019, in 2020,” it may have led market observers to think the average would continue to be higher.

This year, however, especially in 2Q2021, “production levels, and importantly, LNG liquefaction levels,” experienced “a combination of factors.”
Shell had “some gas supply issues in a couple of our assets, and there’s been some operational issues as well,” Uhl told investors. “And it’s that supply issue that’s really been the main feature for the second quarter.

In fact, the fundamentals of the Integrated Gas arm remain solid. “We continue to believe and we think we have a privileged supply portfolio overall. We’ve got privileged relationships in terms of the demand relationships…And of course, there’s new opportunities that are emerging in this business as well so we’ve seen some of the risk.”

Opportunities to deliver carbon-neutral LNG are growing, with new markets emerging “from a re-gas perspective or from a shipping perspective,” Uhl said. “There are also important new milestones in terms of growing the business that will underpin, we think, the long-term strength and overall the fundamentals.”

Asked about the maintenance at LNG terminals operated by Shell and its peers, Uhl acknowledged there were “many” issues. However, “I’m not aware of it being a somatic issue around backlog maintenance and certainly within the Shell family of assets. It’s been pretty disparate issues at play.”

She added, “We’ve been very careful through the pandemic to ensure that asset integrity and maintenance gets the right level of attention. And there’s pretty distinct issues at play with our assets, so I don’t think it’s a backlog issue so much.”

There are maintenance pieces to the puzzle, along with the gas supply piece. With supplies coming from third parties, she said, “it’s not necessarily the Shell portfolio at play that’s causing some of these outcomes.”

In addition, she expects some of the issues to “resolve in weeks. Some of them will take some months, so I will expect some of this impact going into the second half of the year. But once again, I don’t see there is a structural issue certainly for our portfolio.”

The overall fundamentals of the LNG business are “very strong,” Uhl said. “If you look at the volumes we’ve achieved, or the industry has realized, in the first half of 2021 it’s some 10% higher than it was at pre-pandemic levels. So I think that’s a good solid indication of the demand for LNG…

On Thursday Tellurian Inc. inked a sale and purchase agreement with Shell to supply 3 mmty for the still unsanctioned Driftwood LNG export project in Louisiana.

Van Beurden was asked about the Anglo-Dutch energy major’s decarbonization strategy. A Dutch court in May ruled Shell had to reduce its carbon dioxide (CO2) emissions in 2030 by 45%, sharply more than the company had planned. Shell’s goal is to reduce CO2 emissions by the end of the decade by 20% from 2019 levels. It also is aiming to become a net-zero emissions business by 2050, with emissions cut by 45% by 2035.

The landmark ruling by the district court in The Hague, where the supermajor is headquartered, would require Shell to reduce CO2 emissions by 45% in 2030 across the entire business group, aka Scope 1 emissions. It also would apply to cutting emissions from 2019 levels from suppliers and customers, aka Scope 2 and 3 emissions.

“Indeed, we have said very clearly that we will upgrade, accelerate, step up, etc.” the decarbonization efforts, van Beurden said. Shell unveiled a more stringent CO2 reduction strategy in February, three months before the court’s ruling.

“We now have to examine what else, if any, we can do,” van Beurden said. While Shell remains committed to becoming carbon net-zero by 2050, the court’s accelerated target is “a challenge.”
Still, Shell “will step up to…examine what it would take, but we could do it…We are making progress already on the refining side…We will again go back to our shareholders and say, ‘this is what stepping up to the challenge means…”

Sharply reducing the Scope 3 emissions of customers “is a significant best-efforts obligation. That’s a different matter,” van Beurden said. “We cannot go faster than society. That is just a reality. Maybe it’s inconvenient for society, but it is also true. So, here we say we go as fast as we can.

“Our strategy is all about helping our customers decarbonize,” said the CEO. “But what percent is doable remains a big question…”

Rumors have surfaced in recent weeks that the Permian Basin portfolio is on the market. In the quarterly slide presentation to accompany earnings, the Permian remains one of the nine core upstream regions.

“I’ve seen the rumors as well,” van Beurden said in his measured reply. “We don’t comment on rumors, and I didn’t think today was a particularly good day to start changing that practice. So I’m afraid you will have to live with that.”

About selling other assets, though, including refineries, van Beurden offered more insight. Shell operated 54 refineries in 2004. It’s now down to eight, and eventually, “we will go to five,” he said. “Now, indeed, selling refineries, it’s not always easy, but I’ll be very clear, we have been making very good returns out of selling these refineries.”

The refineries often have integrated value attached in terms of the petrochemical business and with trading/supply agreements, the CEO said. “Quite often, we are able to find a win-win arrangement, where we will hold on to the part of the value while sharing that also in the deal with the buyers.”

To reduce CO2 emissions, however, more assets are going to be divested to cut by half its direct and indirect emissions, aka Scope 1 and 2.

“Bear in mind that refining is the single biggest component in our Scope 1 emissions in the company,” van Beurden said. “Most of the Scope 1 emissions, 70 million tons, come from refining and chemicals. So changing that footprint actually is a significant contribution as well. That’s not a reason why we do it, but it just happens to help.”

Shell does not anticipate capital expenditures (capex) to increase above $22 billion this year, Uhl noted. “Going forward, as we’ve moved to the second part of our capital allocation framework, we will expect to spend a bit more in terms of capex to fund the energy transition to fund our strategy. But we’ll do it in a measured way.”

Capex always is tied to the “macro environment,” but so far, so good, Uhl told investors. Shell is “generating significant cash, and we think the future looks relatively bright from a macro perspective and also in terms of our generation.”