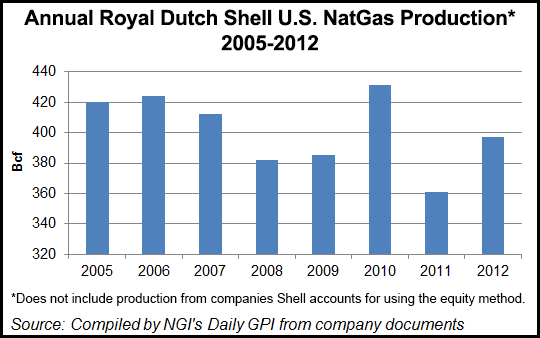 Speaking at the World Energy Congress in South Korea, Voser said the oil major remains committed to expanding its global natural gas resources, including gas exports worldwide to Asian markets. However, North America’s unconventional properties haven’t panned out as expected, and there’s also some uncertainty about what’s ahead in Alaska’s offshore.

Shell took a $2.2 billion charge for 2Q2013 primarily against its North American unconventional investments (see Daily GPI, Aug. 2). The charge led to a review of all of the major’s U.S. and Canadian properties, with as much as half of its nine main unconventional onshore properties on the list for sale. The Eagle Ford Shale and Mississippian Lime properties already are being marketed.

Two years ago Shell had almost four million net acres in the North American onshore, and it now produces about 300,000 boe/d from its U.S. and Canada reserves, with about 50,000 boe/d from liquids-weighted properties. It once had been targeting 4 MMcf/d of gas by 2017 produced from its North American unconventional targets: tight gas and shale. However, the expected returns have fallen with lower gas prices.

“We didn’t get the results which we were expecting to get in the shorter term…We will therefore have to develop this a little bit more before we take benefits from it,” Voser said. “It was clearly not as successful as [we] thought.”

In any case, it’s going to take a long time for the rest of the world to replicate the U.S. unconventional gas revolution, Voser predicted. The United States may not have the amount of reserves that countries such as Russia and China have, but it has the technology edge, which will take decades to match.

Voser’s speech for the most part focused on the energy needs emerging in Asian markets and the need to prepare now to diversify the energy mix. He stressed the push to increase the use of natural gas, and in particular, bring in more liquefied natural gas (LNG). Shell is one of the world’s biggest suppliers of LNG, with a proposed export project pending in British Columbia.

“At Shell, we see worldwide LNG supplies doubling this decade and Australia is front and center,” Voser said. “It’s building around half a dozen major new LNG projects. By the end of the decade, Australia could rival Qatar as the world’s biggest LNG exporter. By 2020, North America may also emerge as a significant LNG supplier. This year, the U.S. government has granted several new permits for projects to export LNG worldwide. And in Canada, Shell, Kogas and other partners have announced plans to develop an export facility on the Pacific Coast…

“But we must also acknowledge certain realities. None of these LNG projects are cheap or easy to build. They’re major infrastructure projects. And there’s competition for the human and physical resources needed to build them. So the energy industry must continue to strengthen the competitiveness of natural gas.”

Shell officials haven’t decided when they may attempt to relaunch exploration efforts offshore Alaska, he said. Shell was to have continued drilling projects in the Chukchi and Beaufort seas this year but it put its Alaska offshore programs on hold after the Department of Interior sharply criticized the program for failing to maintain “adequate oversight” of its contractors and for problems with its equipment (see Daily GPI, March 18).

It may be 2014 or 2015 before Shell returns to Alaska, said Voser. Now, the company is looking for more clarity on how to move forward. It’s still a “great long-term prospect,” but the effort has to be a proven money-maker, he said. If for some reason Shell’s management concludes that Alaska offshore drilling is not worth pursuing and “better” opportunities are available, there is a possibility that Alaska could be scuttled. “And if that results in a write-off, that’s part of our business risk,” he told reporters.