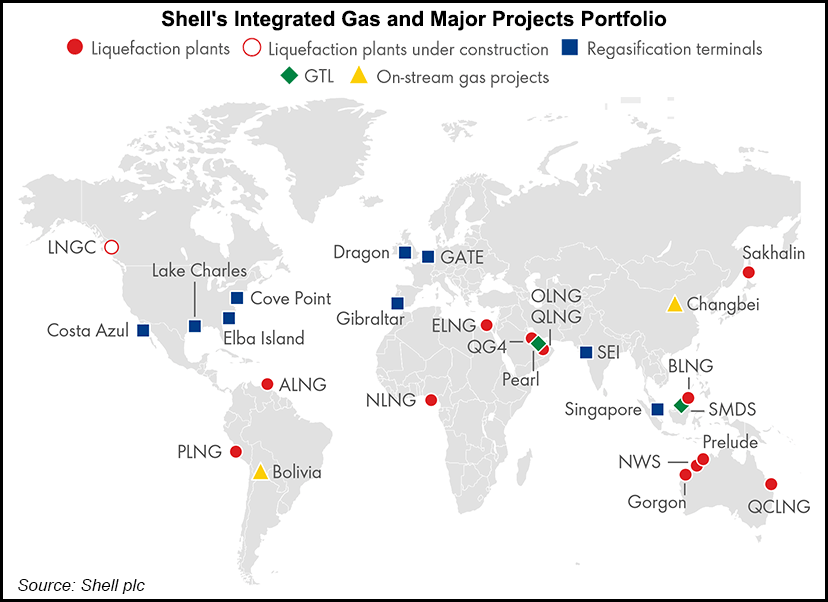 “The war in Ukraine is first and foremost a human tragedy, but it has also caused significant disruption to global energy markets and has shown that secure, reliable and affordable energy simply cannot be taken for granted,” van Beurden said.

“The impacts of this uncertainty, and the higher cost that comes with it, are being felt far and wide. We have been engaging with governments, our customers and suppliers to work through the challenging implications and provide support and solutions where we can.”

For Shell to also play a part in the energy transition, van Beurden said it was “crucial” for the global major to generate value through earnings and cash flow.

“This allows us to support our customers as they shift to cleaner energy,” he said. “It’s also the best way for us to contribute to the security of energy supplies.”

A spike in oil and natural gas prices led to a sharp increase in first quarter results, as Shell had noted in preliminary guidance. Still, the planned exit from Russia, announced following Ukraine’s invasion, has led to global oil and gas market disruptions.

The plan to “withdraw from all Russian hydrocarbons” is being done in a “phased manner,” Gorman told investors. “So, we have stopped buying Russian crude oil and liquefied natural gas, or LNG, on the spot market and we will not renew any long-term contracts. We have also stopped spot purchases of cargoes of refined products directly exported from Russia.”

At the same time, Shell is working to keep the retail fuel stations in Ukraine supplied, she said.

“And as the world’s largest supplier of LNG, we continue shipping natural gas to where it is needed most. One example is the agreement we have just signed to ship LNG through the terminal that will be built in Germany,” Gorman said.

In March, Shell agreed in a memorandum of understanding to buy some supply from GmbH’s proposed LNG facility in Brunsbüttel, Germany. The proposed terminal, supported by German officials, could provide 8 billion cubic meters/year (Bcm/y).

Germany is looking at other ways to ensure it has adequate natural gas supplies. To that end, Uniper SE, which last year canceled a proposed 10 Bcm/y floating LNG terminal in the country, has clinched an agreement with German authorities to begin constructing what could be the first import terminal in the country.

“It’s important to recognize right now that it’s not that Europe is necessarily short of import terminals in general,” van Beurden said. “But they’re concentrated potentially in some of the places where you don’t necessarily have the interconnectors to Northwest Europe, where we simply have shortages, and of course, into some of the Eastern European countries as well.”

The question is, “how do we create all the arteries to be able to do that? It’s difficult at the moment, given the infrastructure of the importation into Europe to see anyone looking at term contracts here, but I do think it’s going to be a critical part of the overall puzzle if you are to have truly the sort of energy security that you need in Europe.”
No one knows yet how the situation will play out, the CEO said.

“I’m not going to speculate as to whether from a government perspective, or if private entities step into that void. But I do think if you’re going to attract longer term volumes, you’ve got to have to see some of that…”

“I think these are great opportunities for us to continue to add to our build portfolio,” van Beurden said. He noted that the Shell-led LNG Canada project under construction in British Columbia extends “the global reach that I think makes this portfolio incredibly unique and I think the leading integrated gas portfolio in the world.”

Meanwhile, Shell during the first quarter completed the largest turnaround in its history at Pearl in Qatar, the world’s largest gas-to-liquids project. In addition, the Prelude floating LNG facility in Australia “is also back online,” and has been “supplying additional volumes since mid-April,” Gorman noted.

“At the same time, we are accelerating our transition to low-carbon energy. This includes our successful bids, together with our partners, to develop large-scale offshore wind farms in the U.S.A. and UK. Together, they represent 6.5 GW of total generation capacity. And just last week, we announced the acquisition of Spring Energy Group, one of India’s leading renewable power platforms.”

Even as Shell continues to deliver gas and oil, “we are also meeting the climate targets that form part of our Powering Progress strategy to be a net-zero emissions energy business by 2050,” the CFO said. “So, by the end of 2021, we achieved our short-term target to reduce the net carbon intensity of the energy products we sell by 2.5%, compared with 2016.”

Production in the first quarter was down overall by 4%, which Shell attributed to selling Permian Basin assets. Shell also noted the “lower demand due to a milder winter, partly offset by comparative help from Hurricane Ida recovery and lower maintenance” a year ago. Total production available for sale fell by 6% from 1Q2021 to 2.96 million boe/d.

For the Integrated Gas unit, output fell sequentially in the first quarter to 896,000 boe/d from 978,000 boe/d. LNG liquefaction volumes increased, though, to 8.00 metric tons (MT) from 7.94 MT in the fourth quarter. LNG sales volumes also rose to 18.29 MT from 16.72. Output and LNG volumes are predicted to decline in 2Q2022 to reflect the decision to not recognize the volumes from Russia’s Sakhalin LNG project. Sakhalin volumes were around 0.8 MT in 1Q2022, Shell noted.

Shell’s current cost of supplies in 1Q2022, which is similar to U.S. net profits, increased to $5 billion (94 cents/share) from year-ago profits of $4.3 billion (73 cents). Cash flow from operations jumped to $14.8 billion from $8.2 billion, while free cash flow increased to $10.5 billion from $7.7 billion. Operating expenses were nearly flat.

During 1Q2022, Shell estimated post-tax charges for exiting Russia led to one-time charges of about $3.9 billion.