Royal Dutch Shell plc CEO Ben van Beurden on Tuesday made a forceful case about the future of natural gas, noting that the supermajor has a quiver of arrows targeting multiple projects worldwide. 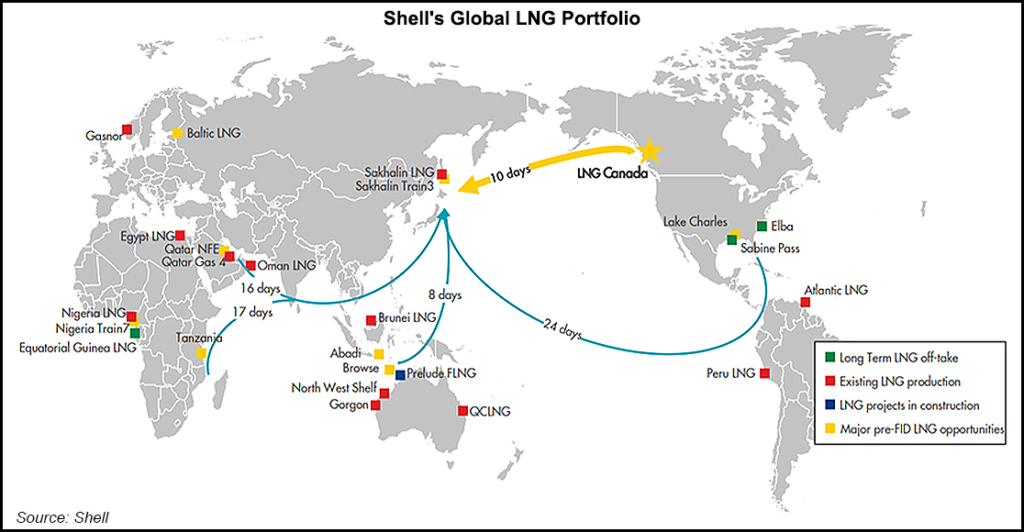 Speaking at the Oil and Money Conference in London, van Beurden said many are wondering about the future of the oil and gas industry overall, particularly in light of climate change and the future of the world. He has not been shy about advocating for alternative energies by investing in hydrogen and electric car charging.

“A few months ago, I suggested that the UK should consider ending sales of conventional cars before 2040,” he told the audience. “That got a little attention at the time. But even headlines that are true can be misleading. They might even make people think we have gone soft on the future of oil and gas. If they did think that, they would be wrong.”

Shell is looking to the future with its New Energies division, where it plans to spend $1-2 billion a year on renewable and alternative energies, but it’s a paltry amount compared to total annual capital spending of $25 billion.

The portfolio will continue to evolve, van Beurden said, and alternative energies are to become a “bigger part of what we do. But that pace of change will be linked to the pace of change in society. We do plan to be at the forefront of change in our industry, but we cannot and will not seek to dislocate ourselves from the people who buy our products.”

Shell’s core business “for the foreseeable future” is “very much in oil and gas, and particularly in natural gas…Oil is going to be needed by this world for a long time to come, and gas even more so.”

Shell has taken big steps in the past couple of years to meld its vision for natural gas, which included merging with BG Group plc, one of the leading liquefied natural gas (LNG) operators in the world. The gas assets “were truly a jewel in the crown,” said the CEO. “Overnight, Shell cemented its leading position on LNG.”

The supermajor’s plans for all things gas, including gas-to-liquids (GTL) and LNG, extend far and wide, with holdings in the Sakhalin 2 project, Pearl GTL project in Qatar, the Prelude LNG facility offshore Australia and a Nigerian LNG project with six production lines in operation.

In addition, “there is our Pennsylvania chemicals project, which will be be using shale gas once construction is complete…Wherever you find natural gas in the energy system you also find Shell.”

The long list of gas-directed projects also now includes the Shell-led LNG Canada, which was given a green light in September. The first gas exports to Asian markets are expected by the mid-2020s.

“If anything shows you that Shell means business when it comes to gas, it is this project,” van Beurden said. The export project set for Kitimat in British Columbia “would not have made it if it had not had such a compelling case on costs.” The project also is “compelling” because it is “one of the lowest greenhouse gas emission-profiles for a project of its kind, in large part because of our decision to use hydro power.”

Shell’s Integrated Gas unit “has to generate serious cash…That’s why it is classified as what we call a cash engine in the Shell portfolio, alongside oil products, and conventional oil and gas…

“By contrast we look to deepwater and chemicals as our main areas for growth” in the near term.

“Shale is at the next level, considered an emerging opportunity, alongside New Energies. So, we have invested heavily in gas, to the point that we lead the international oil companies. And we intend to keep it that way.”

Between 2018 and 2035, Shell expects gas demand to grow at an average of 2%/year, twice the rate of total worldwide energy demand. The future of LNG looks even better, he said. “We expect demand for LNG to increase at an average of 4% per year until 2030.”

Shell saw a need to backstop its gas investments, particularly for LNG, as it realized how much demand was growing. Shell has warned about the low level of international investment in LNG. The company’s LNG outlook issued this year “raised the possibility of a supply crunch by the mid-2020s.”

Still, industry has to “improve the environmental case for gas,” he said. “Society rightly demands ever cleaner energy. Where natural gas is concerned, this means we must reduce leaks of methane throughout the production system.”

Shell has joined its peers in working to reduce methane emissions and recently launched a push to improve data gathering on operational leaks, including oil and gas projects. The goal is to reduce emissions below 0.2% by 2025.

Moving into gas “can be smart for the industry as a whole; and even more so if it can continue to come together to boost the environmental case for gas by tackling methane leaks,” said the CEO. “No newspaper will run a story with this headline: ”Oil and gas CEO has confidence in future of gas.’ That is not news. But, nevertheless, it is true.”