Provincial earth sciences agencies have made an opening move toward introducing carbon capture and storage (CCS) into the prolific Montney Shale gas production region in northeastern British Columbia (BC). 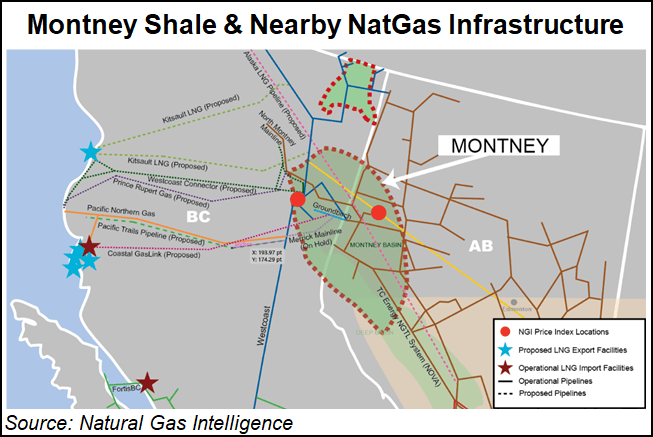 Upstream activity has been rising in the gassy Montney. BC is also in the process of changing its natural gas and oil royalty system.

Geoscience BC, the B.C. Centre for Innovation and Clean Energy (CICE) and the BC Hydrogen office announced work has begun on a “Northeast B.C. Geological Carbon Capture and Storage Atlas.”

The earth sciences project will identify CCS sites, estimate their potential storage volumes, make the information public, and hold an “outreach and engagement program” to spread awareness of the greenhouse gas (GHG) cleanup, said the agencies.

The CCS atlas enjoys backing from Shell Canada Ltd. The Shell plc subsidiary, senior partner in the LNG Canada liquefied natural gas export terminal and Coastal GasLink pipeline now under construction, is a founder of CICE along with the BC and federal governments.

The main transporters of BC gas and prospective atlas users in industry – TC Energy Corp., Enbridge Inc. and Pembina Pipeline Corp. – have qualified in Alberta as bidders for government approval of projects to expand a pioneer provincial CCS network.

The Canadian government made a commitment in the 2022 federal budget to help cover costs of GHG reduction by granting CCS investment tax credits.

Alberta’s government is expected to top up the aid in forthcoming approval decisions on a CCS project lineup.