Royal Dutch Shell plc is joining the parade of energy operators in setting its sights to become a net-zero emissions energy business by 2050, or even sooner. 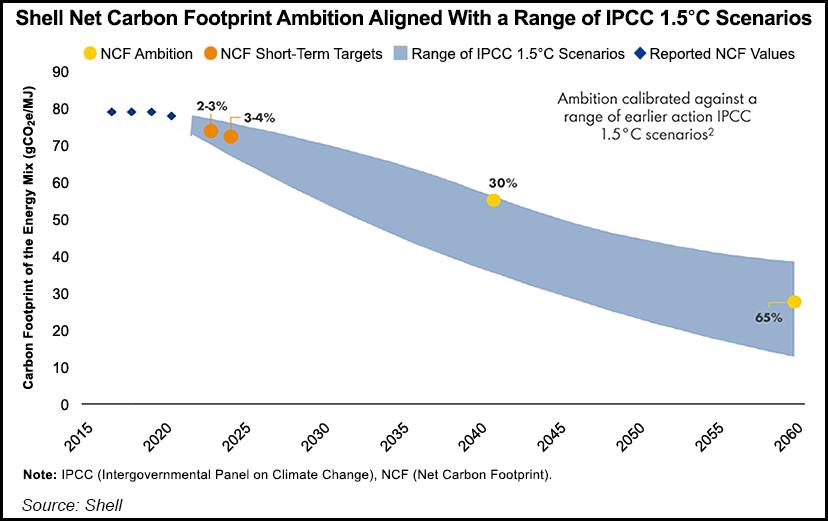 The Anglo-Dutch major said the goal is to cut scope one, two and three emissions from all of its manufacturing and to “pivot toward serving businesses and sectors that by 2050 are also net-zero emissions.”

The initiative was unveiled at Shell’s Responsible Investment Annual Briefing on Thursday.

“With the Covid-19 pandemic having a serious impact on people’s health and our economies, these are extraordinary times,” CEO Ben van Beurden said. “Yet even at this time of immediate challenge, we must also maintain the focus on the long term.

“Society’s expectations have shifted quickly in the debate around climate change. Shell now needs to go further with our own ambitions, which is why we aim to be a net-zero emissions energy business by 2050 or sooner. Society, and our customers, expect nothing less.”

Shell is accelerating earlier goals to reduce the net carbon footprint “in step with society’s aim to limit the average temperature rise to 1.5 degrees C in line with the goals of the Paris Agreement on Climate Change.”

BP plc last month said it was tossing aside the autonomous upstream and downstream business distinctions as it moves to become a net zero company “by 2050 or sooner.” The London-based operator’s new mission, supported by 10 goals, is “reimagining energy for people and our planet,” CEO Bernard Looney said at the time. Other global operators, including Equinor SA, Eni SA and Total SA also have set goals for net-zero emissions.

The Church of England Pensions Board, a major investor that has pushed for lower emissions, praised the more ambitious goals.

“It is indicative of Shell’s confidence in not only navigating the immediate situation but rightly sets the focus on developing net-zero pathways in key sectors that shape the demand for energy,” said the board’s Adam Matthews, director of Ethics and Engagement. He also is a board member of the Institutional Investors Group on Climate Change and co-lead of the Climate Action 100-plus dialogue with Shell.

“Ultimately, it will be by developing and supporting net-zero pathways in these sectors that we will achieve the goals of the Paris Agreement.”

Chief Investment Officer Peter Ferket of Robeco, co-lead of the Climate Action 100-plus dialogue with Shell, said the goals build on the 2018 joint statement and prove “that the strong and committed engagement of institutional investors with Shell can help accelerate the pace of change to deliver the goals of the Paris Agreement.”

In 2017, Shell became the first international oil and gas company to set a goal to reduce its net carbon footprint in the energy products it sells, expressed as a measure of carbon intensity, taking into account their full life-cycle emissions.”

Two years ago, Shell announced its intention to build on its long-term ambition with a commitment to setting specific net carbon footprint targets for shorter periods, of three or five years, linking them to executive remuneration.

Shell last year then set an unconditional three-year target to 2021 to reduce the carbon footprint by 2-3% compared to 2016, linking it to senior executive remuneration.

This year’s unconditional three-year target (to 2022) sets the reduction target range at 3-4% against the 2016 baseline, linked to remuneration for more than 16,500 staff. Shell plans to set a target every year, with each one covering a three-year period.

“Coronavirus and its fall-out doesn’t change that. if anything, it adds greater weight to the argument. Despite immediate cash flow constraints, Shell (and its peers) will emerge from this period more determined to make the shift.”