An affiliate of Royal Dutch Shell plc started acquiring rights-of-way this month for a 94-mile ethane transport system that would feed the company’s proposed multi-billion dollar cracker in Western Pennsylvania. 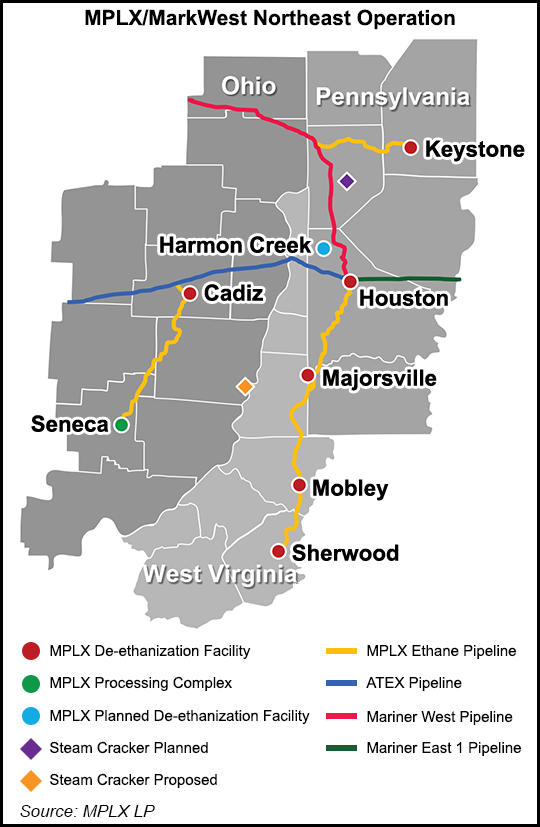 The two-leg system would have three source points within the rich-gas portions of the Marcellus and Utica shales. It would collect ethane from MarkWest Energy Partners LP’s Houston Processing and Fractionation facility in Washington County, PA, and from its Cadiz Complex in Harrison County, OH. The system would also receive ethane from Utica East Ohio Midstream’s nearby Harrison Hub fractionation plant in Scio, OH.

Shell announced in June that it would build the ethane cracker on a 400-acre site near the Ohio River in Potter and Center townships in Beaver County, about 30 miles northwest of Pittsburgh (see Shale Daily, June 7).

If built, it would mark the first time in more than 20 years that such a facility has been constructed in the United States outside of the Gulf Coast. NGI recently took a deeper dive into what Shell’s decision could mean for the Appalachian region and the country as a whole in a special report, Release The Cracker.

The facility would have the capacity to produce 1.6 million metric tons/year (mmty) of polyethylene and 1.5 mmty of ethylene, which are key building blocks for plastics. Capacity of both the cracker and the pipeline system, Fisher said, would be a little more than 100,000 b/d.

That makes the Falcon system comparable in size to the Appalachian Basin’s limited natural gas liquids (NGL) infrastructure. The Appalachia-to-Texas Express pipeline, which carries Marcellus and Utica ethane to Mont Belvieu, TX, has an expandable capacity of 125,000 b/d. The Mariner East 1 pipeline, which carries ethane and propane from Western Pennsylvania to the Marcus Hook Industrial Complex near Philadelphia for domestic and international distribution, has a capacity of 70,000 b/d. The Mariner West pipeline carries 50,000 b/d of ethane from the basin to Michigan and Canada.

“That’s a big cracker, but that is only one cracker, whereas on the [Gulf Coast] you’re more on the billion total barrels per day order,” said BTU Analytics LLC analyst Marissa Anderson of the Falcon system’s proposed size. “For the Northeast, it’s more material demand. For the U.S. overall, it’s not.

“It helps with demand in the region; it helps with ethane recovery,” she added. “The Northeast is kind of an island where there’s no real local demand for ethane. It all needs to get transported via pipe either to the Gulf or Canada or the East Coast. What this does is it provides a local source of ethane demand, which helps the market locally.”

Ethane is a major part of the gas stream in Appalachia, accounting for more than 50% of the typical NGL barrel there. With exports now leaving Marcus Hook and more infrastructure online, ethane production has been increasing in the region. The cracker and other projects that are planned, such as Kinder Morgan Inc.’s Utopia Pipeline Project, which would carry ethane to the Canadian petrochemical market, are expected to drive more production.

The company operates a majority of the de-ethanization capacity in the Appalachian Basin. Based on current utilization, MPLX and MarkWest can support the production of an additional 70,000 b/d of ethane, according to its latest investor presentation. Shell’s plan to tap MarkWest facilities for ethane, however, will support additional investment for ethane recovery over the coming years.

Kevin Hawkins, MPLX’s senior manager of investor relations, said the company was not yet ready to provide specifics about how it might meet Shell’s demands. The company highlighted plans to invest between $500 million to $1 billion in ethane solutions over the next fives years on its second quarter earnings call. Management said there will likely be a “number of de-ethanization facility investment opportunities” and added that those would go beyond Shell’s cracker.

Just because Shell announced the cracker “doesn’t alleviate the need to also move ethane to either the Gulf Coast or the East Coast,” Heminger said. “I mean, I think there’s going to be large volumes of ethane that need to find a home. And so the announcement of an ethane cracker, I don’t think, would suggest that these solutions are being put on hold or being deferred.”

MPLX said ethane volumes in the region reached a new record of 116,000 b/d during the second quarter, up 76% from the year-ago period. For example, Antero Resources Corp., one of the basin’s most active operators and liquids producers, only began recovering ethane in December. Its ethane volumes have spiked sharply since then, going from 11,884 b/d in 1Q2016 to 17,373 b/d in the second quarter (see Shale Daily, Aug. 9).

Ten natural gas producers have signed 10-20 year agreements to anchor Shell’s cracker. The company has been approaching landowners in the region about the ethane system, but Fisher said Shell began securing land this month for the pipelines. The cracker isn’t expected to be operational until the early 2020s, and the Shell affiliate has not yet made any filings for the pipeline system with state and federal agencies, according to regulatory officials. No cost estimate for the project was provided.