After earlier hints that this week’s cold blast could linger into March, a few warmer revisions during the Feb. 20-26 period sent natural gas forward prices crashing, according to NGI’s Forward Look. The March contract rolled off the board an average 13 cents lower during that time, while April fell 10 cents on average. 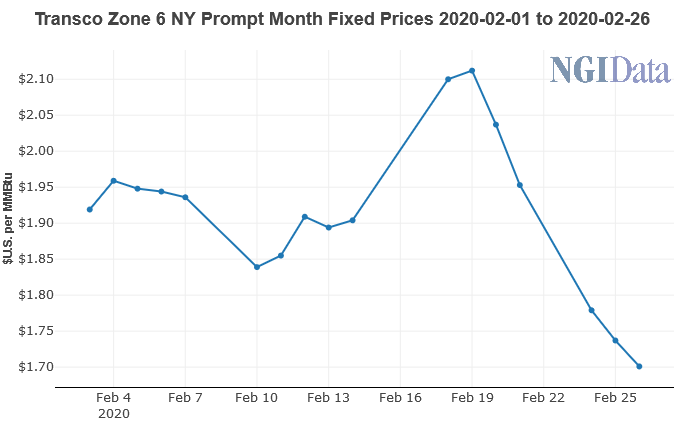 Warmer changes in long-range weather outlooks started to surface around Feb. 20, but kicked up a notch over the next couple of days. By Friday, the weather data trended further milder with the American model losing more than 10 heating degree days (HDD) and the already warmer European model losing 3-4 more HDDs, according to NatGasWeather. Both are now “quite bearish” with the pattern through the middle of March, with only glancing shots of cold air expected across the far northern United States and mild to warm conditions over the rest of the country, the firm said.

Market sentiment is “just as bearish as it can get,” despite the consistent tightening of balances seen the last several weeks, according to Bespoke Weather Services. Thursday’s data showed a minor decline in production, although power burns also weakened a bit, the firm said.

“We have maintained a bearish lean for awhile due to the weather, which still matters for awhile yet, but even for us, it is starting to get more difficult to logically rationalize lower prices from here,” Bespoke said. “But, for now, there isn’t exactly anything new to serve as a catalyst for a rally, either.”

However, Friday’s further warming in long-range weather outlooks sent the April contract as low as $1.642 before the prompt month caught a bid and closed the session several cents above that level.

With seasonally milder temperatures ahead, already robust storage inventories are set to swell further, crushing the chances of a meaningful bounce in the market and possibly adding to downward pressure, according to EBW Analytics Group. The firm said the next few storage inventory reports could see the year/year surplus expand by another 200 Bcf or more.

“Although a portion of this is already built into prices, the unfolding growth of oversupplied benchmark, particularly if the winter-long warming trend continues, is likely to spell further downward pressure on natural gas,” EBW said.

On Thursday, the Energy Information Administration (EIA) reported a paltry 143 Bcf withdrawal for the week ending Feb. 21, far lower than expected. Ahead of the EIA report, a Bloomberg survey of 11 analysts showed withdrawals ranging from 145 Bcf to 165 Bcf, with a median of 156 Bcf. Polls by the Wall Street Journal and Reuters produced similar results, while NGI’s model projected a pull of 152 Bcf.

Genscape senior natural analyst Eric Fell, who also had projected a 152 Bcf draw, said the large miss could be attributed to “sloppy weekly storage data. The EIA can only work with the data they get from operators. It is what it is.”

The EIA recorded a 167 Bcf draw for the similar week last year, while the five-year average withdrawal stands at 122 Bcf.

By region, the Midwest withdrew 48 Bcf out of storage, while the East pulled 43 Bcf, according to EIA. Inventories in the South Central region declined by 40 Bcf, including a 27 Bcf draw from nonsalts and a 13 Bcf drop in salts. The Mountain region pulled 9 Bcf out of stocks, while the Pacific withdrew just 2 Bcf.

Weather and storage aside, there are other factors the market is weighing. On the bearish side, the coronavirus continued to drag down oil and stock markets, and may cut further into demand for liquefied natural gas (LNG).

“LNG has exposed the domestic natural gas market to international forces, demonstrated most recently by the cancellation of at least two Cheniere cargoes,” EBW said. “Several other buyers are reportedly considering similar cancellations.”

Furthermore, LNG voyages have been longer than usual, and several vessels are essentially serving as floating storage, according to recent shipping data. “Although any LNG cargo cancellation is likely to be for loadings in late spring or early summer, should the coronavirus continue to spread, it may weaken market expectations and contribute to near-term bearish sentiment for natural gas,” EBW said.

In making a case for the bulls, fourth quarter results are still being reported by Lower 48 producers, and at least some have announced plans to make further cuts to spending and activity.

Apache Corp. on Thursday said it is throwing in the towel on the Alpine High in West Texas as weak gas and natural gas liquids (NGL) prices plunged to less than half of what the company had anticipated for long-term economics. It has dropped all of the Alpine High-directed rigs and some previously planned completions also have been deferred. The company also cut spending for 2020 by 26% year/year.

While forward prices were down across the Lower 48, Northeast markets reflected some volatility that was reminiscent of years past.

Most other pricing hubs across the country moved in line with Nymex futures. In the Permian Basin, however, that meant prompt-month pricing across the region returned to negative territory.

Waha March fell 16 cents from Feb. 20-26 to reach minus 29.5 cents, according to Forward Look. April dropped 10 cents to minus 27.5, while the summer strip slid 11 cents to minus 4 cents. Winter prices remained in positive territory, averaging 56 cents after slipping just 3 cents.

Meanwhile, TC Energy Corp. on its recent 4Q2019 earnings call indicated that it intends to begin partial service on its Tula-Villa de Reyes (T-VDR) project in the second quarter, with full operations set for late this year. Imminent start of T-VDR increases the potential for increased Permian exports to Mexico via the Wahalajara project now under development, according to Genscape Inc.

Wahalara’s southernmost segment, the Villa de Reyes-AguascalientesGuadalajara (VAG), would feature a bidirectional line connecting Aguascalientes to Villa de Reyes at an interconnect with the T-VDR project. TC management indicated that the Tuxpan-Tula (aka Tula) project continues to face substantial delays and is not available as a source of supply for T-VDR.

Assuming Mexico’s Comisión Federal de Electricidad, the primary capacity holder on all of these systems, manages its capacity economically, it would be cheaper to source gas for T-VDR from the Permian via Wahalajara, Margolin said. “At the moment, we are modeling an in-service date for Wahalajara of this coming March and expect the southern VAG system will fill at or near it’s nearly 0.9 Bcf/d capacity.”