The United States is expected to pivot from a net energy importer to a net exporter by 2030, according to the Energy Information Administration (EIA), with the transition coming even sooner — less than two years from now — for natural gas net imports/exports. 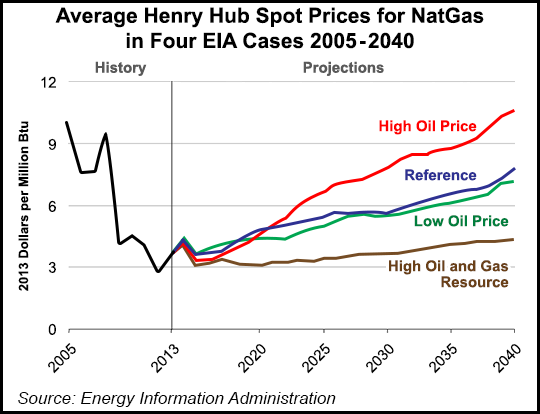 It would be the first time since the 1950s that the United States has been a net energy exporter, and it would come thanks to strong growth in domestic crude oil production from tight formations through 2020 and limited growth in domestic demand after that, EIA said.

The transition to total energy net exporter was forecast by most of the cases used in the agency’s Annual Energy Outlook 2015 (AEO2015), which was unveiled Tuesday. All of the cases predicted the earlier move to net natural gas exporter status.

“We don’t become a net petroleum exporter in total, but the numbers stay fairly low,” said EIA Administrator Adam Sieminski. “The U.S. does indeed become a net exporter of natural gas, and that’s fairly soon in this outlook — in the year 2017.” The center of gravity for domestic natural gas production has shifted east to the Marcellus and Utica shales area, he said.

Natural gas export growth is expected to continue after 2017, with net exports in 2040 ranging from 3.0 Tcf in EIA’s Low Oil Price case to 13.1 Tcf in the High Oil and Gas Resource case.

“I think that the key takeaway here is that natural gas prices are going to be very dependent on what assumptions you make about crude oil prices,” Sieminski said. “In the Reference case, the Henry Hub natural gas spot price rises from about $3.00 now to about $4.88 — still under $5.00 — in 2020, and then moves into the high $7.00 number in constant dollars by 2040. That’s driven by increased demand for both domestic and international markets, leading to more production, but at a somewhat higher price in order to drive the resource base.”

The path of crude oil and natural gas prices can vary substantially, depending on assumptions about the size of global and domestic resources, demand for petroleum products and gas (particularly in non-Organization for Economic Cooperation and Development countries), levels of production, and supplies of other fuels, EIA said.

U.S. energy consumption is projected to grow at a modest rate through 2040, with reductions in energy intensity resulting from improved technologies and trends driven by existing laws and regulations.

The projected growth of domestic crude oil and natural gas production varies significantly across regions and cases in AEO2015, leading to shifts in crude oil and natural gas flows between regions, requiring infrastructure adjustments, Sieminski said. Energy imports and exports come into balance starting in 2028 in the Reference case and in 2019 in the High Oil Price and High Oil and Gas Resource cases. “Natural gas is the dominant U.S. energy export, while liquid fuels continue to be imported,” EIA said.

In most AEO2015 cases, Lower 48 crude oil production shows the strongest growth in the Dakotas/Rocky Mountains region, followed by the Southwest region. The strongest growth of natural gas production occurs in the East, followed by the Gulf Coast onshore and the Dakotas/Rocky Mountains regions, and interregional flows to serve downstream markets vary significantly among the cases. Those regional variations in production “can force significant shifts in crude oil and natural gas flows between U.S. regions, requiring investment in or realignment of pipelines and other midstream infrastructure,” EIA said.

The agency said recently that the United States is the world’s top petroleum and natural gas hydrocarbons producer, exceeding the output of both Russia and Saudi Arabia, the second- and third-largest producers (see Daily GPI, April 7).

Data in AEO205 “clearly supports the approval of non-free trade agreement permits to export LNG [liquefied natural gas] by the U.S. Department of Energy,” according to the Center for Liquefied Natural Gas. “In fact, the report serves as evidence that the United States has more than enough natural gas to meet domestic demand and still support the sale of LNG to our trading partners abroad.”

The AEO was presented as a shorter edition under a newly adopted two-year release cycle. Full editions and shorter editions of the AEO will be produced in alternating years, allowing EIA “to focus more resources on rapidly changing energy markets both in the United States and internationally, and to consider how they might evolve over the next few years,” the agency said.