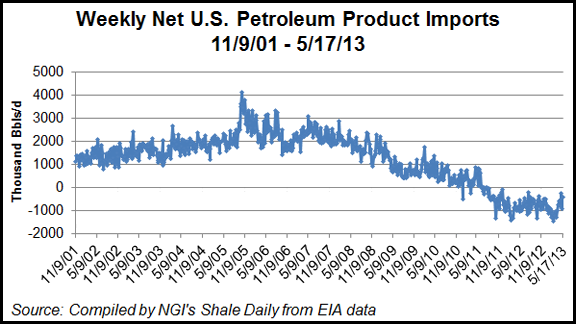 “This expansion is driven by the tremendous growth of U.S. crude oil production from the development of the shale plays coupled with an increase in Gulf Coast refining production and strong international demand for U.S. refined products,” said Michael Creel, CEO of Enterprise’s general partner. “In five short years, the United States has transitioned from importing approximately 1 million b/d of refined products in 2007 to exporting more than 1 million b/d in 2012, with most of these exports supplied by refineries on the Gulf Coast.”

Weekly net U.S. petroleum product imports, which were as high 4.14 million b/d in late 2005, began a long decline in 2007, and by mid-2011 the nation was a net exporter, according to Energy Information Administration data. In the week ending May 17, the United States exported a net 409,000 b/d.

By utilizing Enterprise’s existing Southern Complex of refined products pipeline, storage and terminal facilities in southeast Texas, Enterprise will provide customers with “significantly improved access” to marine facilities at its ports in Beaumont, TX, and on the Houston Ship Channel. Export service at the Beaumont marine terminal will initially handle Panamax size vessels and is expected to begin in the first quarter, followed in mid-2014 by its expanded marine terminal on the Houston Ship Channel, which will be initially sized to handle up to Aframax class vessels.

Enterprise’s Southern Complex has traditionally served as a feeder system for the Enterprise TE Products Pipeline system, which delivers refined products to the Midwest. Over the past year, Enterprise has repurposed the Southern Complex to increase supply and market access, system flexibility and capacity. Storage capacity at the facilities has more than doubled to 12 million bbl; key pipeline segments serving major refining centers have been made bi-directional; and new interconnects provide access to major, third-party interstate pipeline systems,” Enterprise said Thursday.

The Southern Complex is directly connected for refined product receipts from the Colonial Pipeline and 10 refineries in southeast Texas, representing 3.3 million b/d of refining capacity.